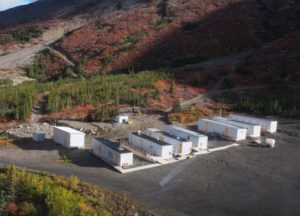 Fireweed Zinc Ltd. [FWZ-TSXV] has struck a deal with Teck Resources Ltd. [TECK.B-TSX; TECK-NYSE] to acquire a large zinc property on the western extension of its Macmillan Pass Zinc Project in the Canadian Yukon.

News of the deal comes amid signs that London Metal Exchange zinc stocks are heading lower. â€œAs of last night they now total just 134,750 tonnes, down from 256,175 tonnes in mid-August,â€ according to a report by Scotiabank.

Due to difficult operating conditions and presumably a lack of available concentrates, many Chinese zinc smelters have shut down, basically reducing Chinaâ€™s refined zinc production capacity in a major way.

Meanwhile, the Nidd property that Fireweed is acquiring from Teck hosts established zinc mineralization on the Boundary Zone, where historic drilling included intersections of 224.0 metres of 2.5% zinc, 0.3% lead, including 4.5 metres of 16.4% zinc, thereby demonstrating the potential for both bulk tonnage open pit and high-grade underground mineralization.

As the Nidd property covers 7,393 hectares in 372 mineral claims, it will expand Fireweedâ€™s claim holdings in the district to 544 km2. With the acquisition, Fireweed now owns all four known zinc mineralized systems in the region â€“ Tom, Jason, Boundary Zone and End Zone â€“ as well as many other zinc exploration targets including the entire highly prospective â€œfertile corridorâ€ of exploration targets extending from Tom to the Boundary Zone and beyond.

â€œAdding the Nidd property to our MacMillan Pass Project is a major milestone in locking up the most prospective parts of the Macmillan Pass Zinc District,â€ said Fireweed CEO Brandon Macdonald.

â€œAfter the Tom and Jason properties, Nidd is an important piece of the puzzle in this district not just because of the established mineralization, but because the propertyâ€™s prospectivity for the discovery of new mineralized bodies,â€ he said.

â€œWe are thrilled to have made this transaction and welcome Teck as a major shareholder.â€

Fireweed has been working to develop the Macmillan Pass zinc-lead silver project at Watson Lake, in the eastern edge of the Yukon, 350 km northeast of Whitehorse.

The company believes it is one of the worldâ€™s leading undeveloped zinc projects. According to a NI 43-101 technical report, the project hosts an indicated resource in the Tom and Jason zones of 11.21 million tonnes of 9.61% zinc equivalent or 6.59% zinc, 2.48 g/t silver, including 1.63 billion pounds of zinc, 610 million pounds of lead and 7.69 million ounces of silver.

A Preliminary Economic Assessment announced in May 2018, said that material can sustain a mining operation for 18 years, one where average yearly contained metal production would be 85,000 tonnes of zinc, 48,000 tonnes of lead and 2 million ounces of silver.

The total project cost is estimated to be $1.05 billion, including pre-production capital expenditures of $404 million. The PEA suggests that the company had reduced its financial outlay by operating starter pits in the Tom West and Jason Main Zone areas. The project is already accessible via road and by air.

Under the agreement with Teck, Fireweed is acquiring a 100% interest in the Nidd mineral claims. In return, it will issued 1.5 million Fireweed shares to Teck, which is bound by a one-year lock-up agreement. Teck will retain a 1% net smelter return royalty on future production from Nidd. It will also retain the right of first refusal to purchase future production concentrates from the Nidd property.

Meanwhile, Scotiabank said there hasnâ€™t been a squeeze on refined zinc prices because the marketâ€™s focus has shifted to new sources of supply that are expected to replenish the concentrate market and then flow through the refined system.

Chinese research agency Antaike estimates that mined zinc capacity outside of China will increase by 700,000 tonnes next year, with MMG Ltd.â€™s [HKEX] Dugald River Mine in Queensland, Australia and Vedantaâ€™s [VED-LSE] Gamsberg Mine in South Africa, and Glencore Agâ€™s Lady Loretta Mine in Australia acting as major contributors

But even with all of this new supply, Scotiabank said the latest forecast from the International Lead & Zinc Study Group (ILZSG) is for the global refined zinc market to record a deficit of 322,000 tonnes in 2018, up from an earlier forecast made in May of 263,000 tonnes.

â€œDespite the rising mine supplies, it projects the market will remain structurally tight in 2019, at a deficit of 72,000 tonnes,â€ Scotiabank said.