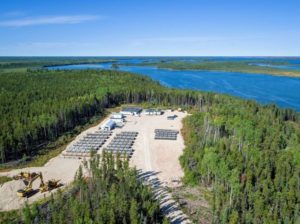 Foran Mining Corporation [FOM-TSXV] has attracted the attention of mining giant Glencore Plc [GLEN-LSE]. The companies signed a Technical Services Agreement under which Glencore provides technical expertise and advice with a view to advance Foran’s McIlvenna Bay deposit to feasibility in exchange for an off-take agreement on the copper and zinc produced from the deposit. Foran’s flagship McIlvenna Bay volcanogenic massive sulphide (VMS) project is located on the eastern flank of the Flin Flon Greenstone Belt which spans 225 km from east-central Saskatchewan to Snow Lake, Manitoba.  This belt is host to a world class VMS mining camp which has produced more than 400 million tonnes of sulphides, mainly copper and zinc, for more than 100 years from 29 mines. McIlvenna Bay, the third largest deposit discovered in the area, may be the next mine to be added to this mining legacy.

McIlvenna Bay has many advantages that are the envy of its peers. Located just 65 kilometres from the town of Flin Flon, Foran has access to millions of dollars of infrastructure including a highway, hydro power, a rail line and a community that has been a mining centre for a century.  Saskatchewan was voted in 2018 as the best jurisdiction to open a mine in the Americas by mining executives surveyed by the Fraser Institute. The province has over 25 operating mines, including potash, uranium, gold and coal. It may soon be able to add a new base metal mine to its portfolio.

Foran released a Preliminary Economic Assessment on McIlvenna Bay in late 2014, which culminated in the current work on a feasibility study (FS), now underway. Foran undertook an infill drill program this year, designed to enhance confidence in the historic resource by upgrading a large portion of it from an inferred to indicated category. Indicated resources can be included in the mineral economics of an FS. Engineering studies that are underway or have been recently completed on the project include, hydro-geology, geo-mechanical, environmental and metallurgical testing.

Crucial to the growth of any mining company is exploration success. VMS deposits often occur in clusters, and Foran’s Hanson Lake district is no different. Several VMS deposits and occurrences have been discovered throughout Foran’s land holdings. The Bigstone deposit has an historic copper-zinc resource. Foran’s best hole to date into Bigstone intersected over 105 metres of 2% copper. Thunder Zone is the first new discovery made on the property in 30 years. Five holes were drilled into this occurrence and all of them intersected good sulphide grades, including the discovery hole with 3.70 metres of 4.07% copper and 0.43 grams per tonne gold.

Unlike the Flin Flon VMS camp, where deposits daylight, the Hanson Lake deposits are covered by a dolomite cap. Electromagnetic (EM) geophysics has been an invaluable tool for making new discoveries such as the Thunder Zone. A very large EM anomaly has also been outlined just 1.5 kilometres south of McIlvenna Bay and its geophysical response is larger than that found at McIlvenna Bay. Discovering the source of this large response is a priority for Foran’s team.

Key to the success of Foran and its projects are its team of executives that are driven to succeed. President and CEO Patrick Soares was at the helm of Brett Resources when Osisko Mining came knocking in 2010.  That takeover was a $370 million deal. Executive Chair Darren Morcombe has strong relationships with influential mining leaders around the world, including Pierre Lassonde, Chair of Franco Nevada, who personally owns more than 11% of Foran’s stock. Executives like Soares and Morcombe have ponied up millions of dollars of their own money because they believe in Foran’s future. Together they own close to 14% of the shares, strongly aligning their interests with shareholders

Foran is positioned to take advantage of the burgeoning demand for copper and zinc.  These commodities are projected to be in short supply due to the technological advances in battery storage and the needs of a growing global middle class as well as increasing demand for electric vehicles. With an FS in the offing and several exploration targets, the Company should be primed to take advantage of this rising demand.