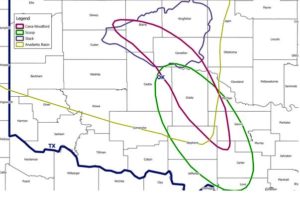 Franco Nevada Mining Corp. [FNV-TSX, NYSE] and Continental Resources Inc. [CLR-NYSE] said Tuesday they have agreed to enter into a strategic relationship to jointly acquire mineral rights in the SCOOP and STACK oil and gas plays in Oklahoma. Franco-Nevada is contributing approximately US$220 million for the acquisition of existing mineral rights owned by a Continental subsidiary. Franco has also committed, subject to the satisfaction of agreed upon development thresholds, to spend up to US$100 million per year over the next three years to acquire additional mineral rights.

The new company will acquire mineral rights in areas of the SCOOP and STACK primarily within acreage operated by Continental. These areas offer prolific well results, excellent economics, proximity to infrastructure and future upside via stacked hydrocarbon-bearing horizons. The mineral rights represent a perpetual ownership interest in land which provide an entitlement for royalties from oil and gas production. This new relationship will add to Franco-Nevada’s existing interest in the SCOOP and STACK.

Continental will be entitled to between 25% and 50% of total revenues generated by the minerals subsidiary based on performance relative to certain predetermined targets. Specific terms of this arrangement and revenue guidance for the new assets have not been announced.

“We are pleased to be able to work with a best-in-class operator in Continental,’’ said Franco-Nevada CEO David Harquail. “For Franco-Nevada, collaborating on mineral rights with an operator is a new business development opportunity,’’ he said. “It will allow for the ongoing growth of Franco-Nevada’s oil and gas interests through the acquisition of mineral rights at the grass-roots level.

Franco-Nevada is a leading gold-focused royalty and stream company with a current market capitalization of approximately $14 billion. Based in Toronto, Franco aims to have 80% of its business in precious metals and up to 20% of its business in non-precious resources, including oil and gas.

Revenues are expected to build as Continental ramps up full-field development of its land position.

However, Franco-Nevada said the increase in oil and gas revenues is expected to be more than matched by a significant increase in its precious metals revenue as the Cobre Panama mine ramps up production next year. Cobre Panama is a huge open-pit copper project located in the Panama jungle, about 120 kilometres west of Panama City. It is being developed by First Quantum Minerals Ltd. (FM-TSX).

Based in Oklahoma, Continental Resources is among the top 10 independent oil producers in the U.S. with a market cap of US$24 billion. Continental is the largest leaseholder and largest producer in the Bakken play in North Dakota and Montana.

The company has significant positions in Oklahoma, including its SCOOP Woodford and SCOOP Springer discoveries and STACK plays.