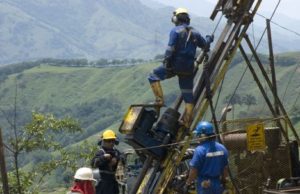 Aiming for a strong production growth profile, Gran Colombia Gold Corp. [GCM-TSX; TPRFF-OTC] is mobilizing to take its strategy to the next level to unlock value for shareholders at one of its flagship gold mining operations in Colombia. The move came last October, just weeks after Gran Colombia said it was on track to meet its revised production guidance by producing 165,000-170,000 ounces of gold in 2017. Recently, Gran Colombia announced their annual production in 2017 reached about 174,000 ounces of gold, up 16% over 2016.

Gran Colombia, a Canadian-listed company with offices in Toronto and Medellin, is the largest gold and silver producer in Colombia with several underground mines in operation at its Segovia and Marmato operations. Roughly 86% of the company’s production comes from the Segovia Operations located in the historic Segovia-Remedios mining district about 180 km east of Medellin, northwest Colombia. However, it is at Marmato where the next phase of the company’s strategy is about to unfold.

Producing approximately 25,000 ounces of gold in 2017, the 100%-owned Marmato Project is situated in the Caldas department in Middle Cauca gold district 80 km south of Medellin. The area has been in continuous production since Spanish colonists seized control of the Marmato mines in 1527. It benefits from its proximity to the Pan American Highway and easy access to both Medellin and the nearby national electrical grid. Marmato also boasts a permitted tailings storage facility.

One of the company’s stated priorities for 2017 was to update the resource estimate for Marmato, taking into account new information obtained since the last estimate in 2012, a shift in mining approach from open pit to underground and an increase in mine cut-off grade. Last October, the company announced that Marmato contains a measured and indicated resource of 3.9 million ounces gold and 22.6 million ounces silver. In addition, inferred resources are 4.2 million ounces gold and 15 million ounces silver. The estimate includes 2.2 million ounces of Deeps Zone mineralization. This is mineralization that was discovered by drilling in 2012 and extends vertically to at least 900 metres below the limit of the current underground operation. It is due to this latest find that the company is able to contemplate the potential to add a second major underground mining operation to its production portfolio.

“In the current gold market, we feel it is prudent to change our approach, shifting from a large-scale, low-grade, open pit operation as previously conceived to a smaller scale, higher grade mining operation,’’ said Executive Co-Chairman Serafino Iacono. “In addition, we intend to implement our contract mining model to incorporate production from the ancestral and artisanal miners working within our titles,’’ he said.

He said the company has already commenced some high level scoping analysis for future mining operations. In 2018, the company will moving forward with the preparation of a Preliminary Economic Assessment (PEA). Exploration crews will target higher grade material with the intention of developing an expanded underground mining operation with a minimum 12-year mine life and life-of-mine gold production of more than 1.5 million ounces. The company aims to move to a Pre-Feasibility Study once the PEA is complete.

“The deep mineralization at Marmato remains open along strike and at depth and we expect our 2018 exploration program will include additional drilling to continue expanding our understanding of the total mineral resource potential of the deposit,” Iacono said.

Meanwhile, last September, Gran Colombia released an updated PEA for the Segovia Operations, which produced about 149,000 ounces in 2017. The 9,000-hectare Segovia Operations includes three high-grade gold mines and has been in production for over 150 years, yielding over 5 million ounces of gold during that time.

The Segovia Operations includes areas operated by the company. Local third party miners are also contracted to work in the company’s mining title and deliver ore to the 1,500 tonne-per-day Maria Dama processing plant. The updated PEA is based on a technical report prepared by SRK Consulting and estimates that 4.1 million tonnes of material averaging 8.8 g/t gold will be processed over an extended mine life to the end of 2026 – four years longer than the previous life-of-mine estimate. The updated PEA also stated that 1 million ounces of gold can be produced at an average all-in sustaining cost of $896/oz. Gran Colombia is continuing its exploration drilling campaign at Segovia and expects a resource update in the first half of 2018.

While every effort has been made to ensure the accuracy of information contained in Resource World Magazine or on the ResourceWorld.com website, and the reliability of sources, the publisher in no way guarantees nor warrants the information and is not responsible for errors, omissions or forward looking statements made by advertisers.

Articles and advertisements in Resource World Magazine, are not solicitations to buy, hold or sell specific securities; they are for information purposes only.

Opinions and recommendations made by contributors or advertisers are not necessarily those of the publisher, its directors, officers or employees. Investors should be aware that risk is associated with any security, strategy or investment and are advised to seek the counsel of a competent investment advisor before making any investment, or utilizing any information contained in this publication.