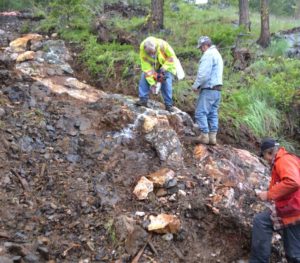 It’s most advanced project is the Gold Drop Project, which is located 40 km from Grand Forks in geologically prospective ground in the well mineralized Greenwood District. The project covers 5,600 hectares and was mined intermittently from 1919 to the 1980s, producing 7,572 tonnes from three veins (Amandy, North Star and Gold Drop). Most of the production occurred before 1942.

In addition to drilling this year, GGX has said it intends to establish small scale production, using hopper/feeder module which can run at four tonnes per hour.

Following the receipt of prospecting assays, including 19.65 g/t gold from the COD vein outcrop, the company immediately moved into a trenching and sampling program on the COD vein. Channel samples returned numerous high grade intercepts, including 43.2 g/t gold and 224 g/t silver.

Drilling and trenching during the 2017 and 2018 exploration seasons has led to the discovery of significant gold-bearing structures which are prevalent throughout the property, including the COD and Everest veins, the company has said.

The latest results are from the final four drill holes of the 11-hole November, 2018 drilling program, which tested the COD vein in an area of high-grade gold and silver mineralization.

The company said the mineralized COD vein system has been traced by drilling and/or trenching for approximately 400 metres strike length and is open to the northeast, at depth and possibly to the southwest.

The Gold Drop property is subject to an option agreement between GGX and Ximen Mining Corp. [XIM-TSXV] dated June, 2016. Under the agreement, GGX can acquire a 100% interest by making payments of cash and shares to Ximen over four years, and committing to a spend $1 million on the property. Under the deal, Ximen retained a 2.5% net smelter return royalty, but granted GGX the option to purchase 1% of the royalty for a payment of $1 million.

Ximen also retained the right to form a joint venture with GGX by reimbursing GGX for 30% of the total amount spent on the property.