GoGold Resources Inc. (TSX: GGD) (OTCQX: GLGDF) (“GoGold”, “the Company”) is pleased to announce the acquisition of the Eagle concession covering the northern strike extension of the Main Deposit on the Los Ricos South property. The Eagle adjoins the Main Deposit where the Los Ricos South Preliminary Economic Assessment (“PEA”) was released on January 20, 2021. This represents an extension to this previously defined Mineral Resource Estimate at Los Ricos South. Due diligence drilling has returned the highest grade intercepts to date in the district. These wide high grade intercepts are consistent with geophysical targets on the new concession. Additional drill results are to follow.

The new concession covers 1,107 hectares, including the area between the Main Deposit and the Company’s Jamaica concession located 3km to the northwest, where the Company holds the rights to additional concessions. While negotiating the concession acquisition and securing legal ownership, the Company completed due diligence drilling, including hole LRGAG-21-014, which intercepted 20,269 g/t silver equivalent (“AgEq”) over 0.7m, contained within 11.9m of 2,260 g/t AgEq which was contained within a wider intersection of 72.6m containing 461 g/t AgEq. This represents the highest value drill hole the Company has drilled in the district, with hole LRGAG-21-031 having comparable results of 428 g/t AgEq over 68 metres. Drilling highlights are provided in Table 1 below, with full results in Table 2.

“We see the addition of the Eagle concession as a clear path to greatly increasing the value of our Los Ricos South project, as it is the same structure extending from our previously drilled Main zone onto the Eagle. As part of our due diligence we completed mapping, geophysics and drilling that strongly linked the geophysical anomaly to the high grade intercepts. In fact, hole 14 is the highest grade-thickness intercept drilled by the Company to date,” said Brad Langille, President and CEO. “As we continue with a systematic drill program, we will evaluate the results which may greatly improve the economics of the previously released Los Ricos South PEA.” 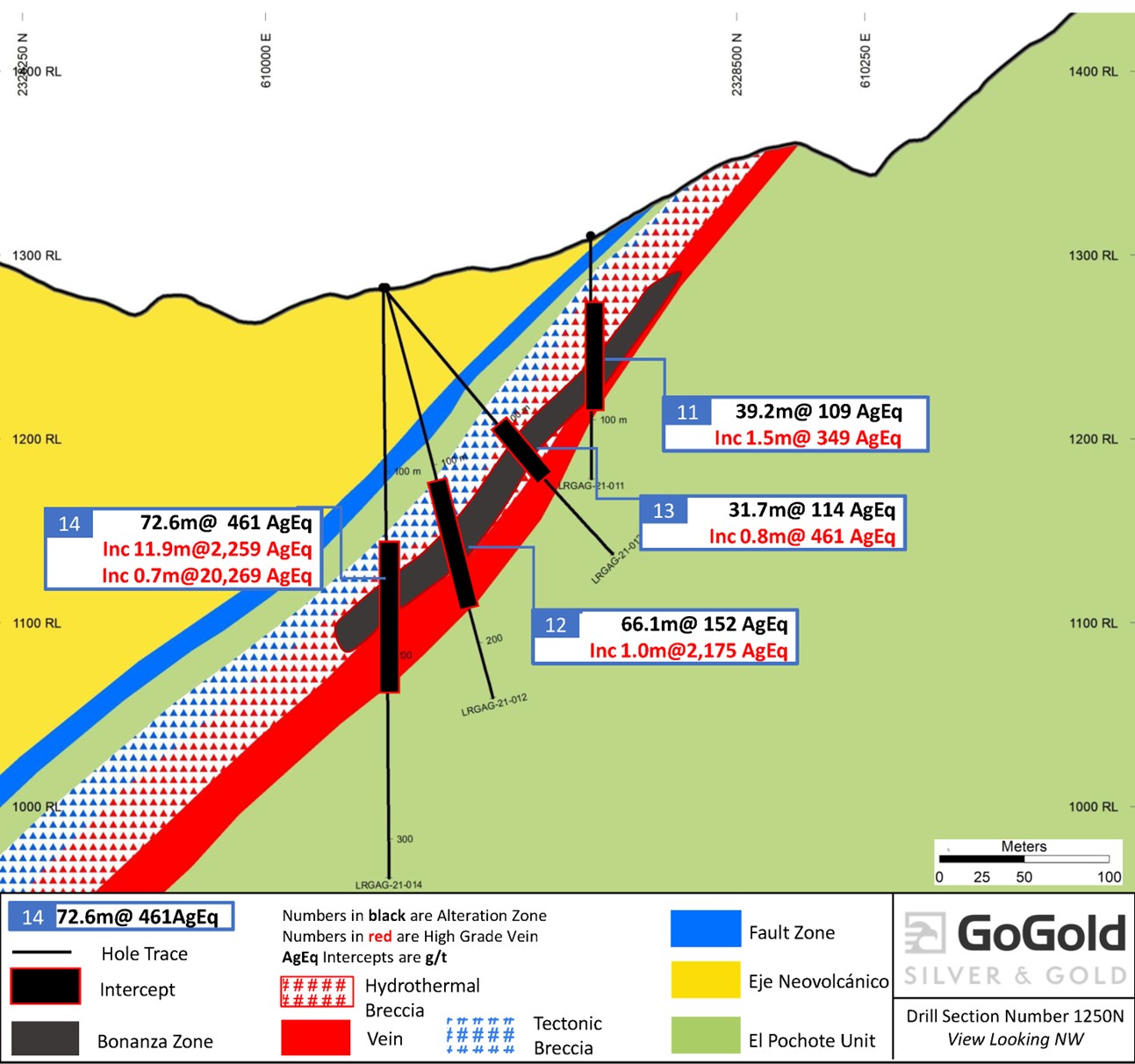 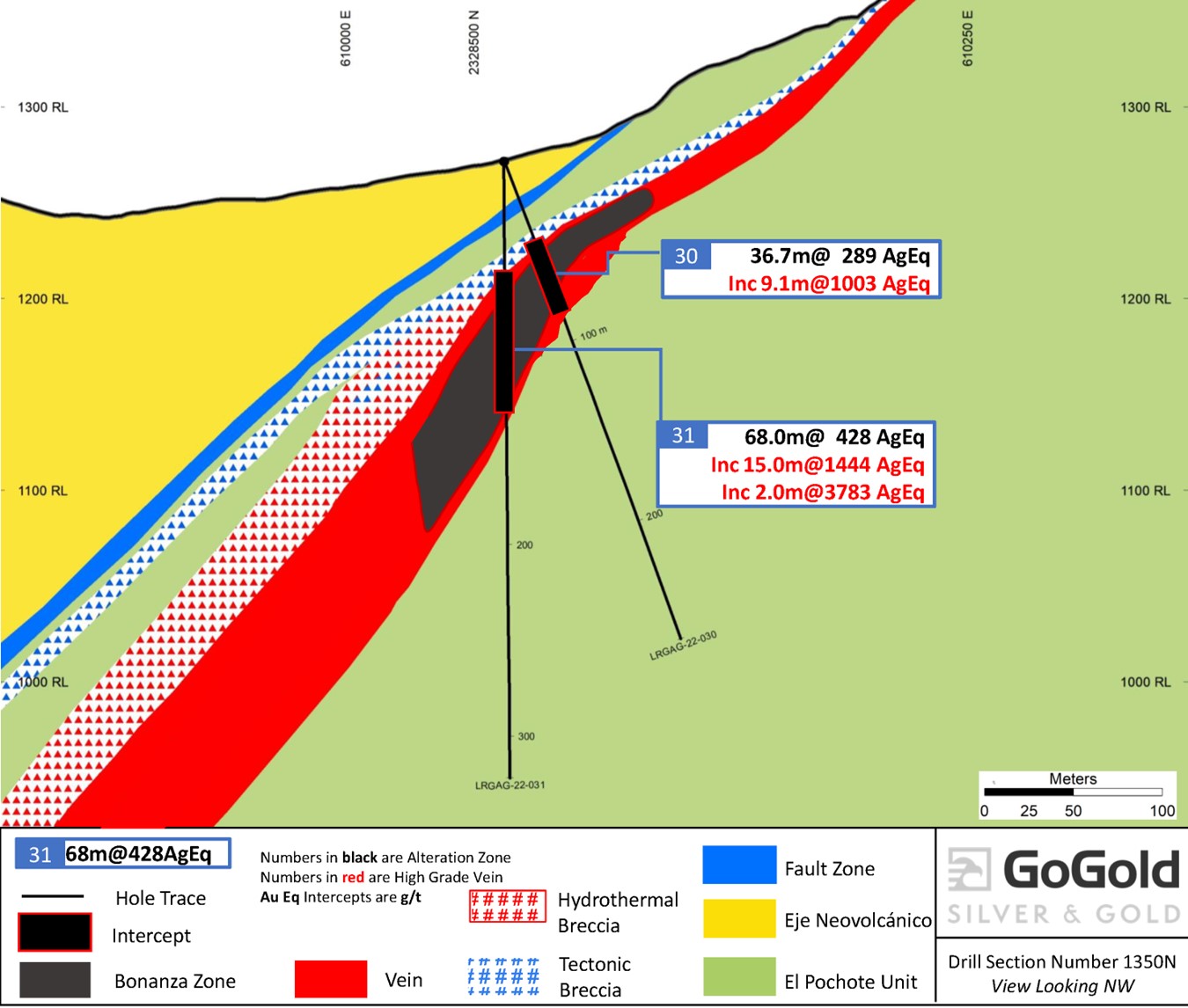 While there was some historical underground mining development in the early 1900’s on the Eagle concession, there was only one historical void encountered during drilling, which suggest that the mineralization at the Eagle may be intact and not previously mined. The location and high grade intercepts may indicate the presence of a high grade ore shoot that was not previously exploited. This differs from the Main Area which has had portions of it’s high grade ore shoots mined out.

The results of the sampling and geophysical IP survey (Figure 3) appear to indicate that the mineralized structure continues in a Northerly direction from the Main Area. Significant geophysical anomalies were identified which will form targets for the drilling campaign. 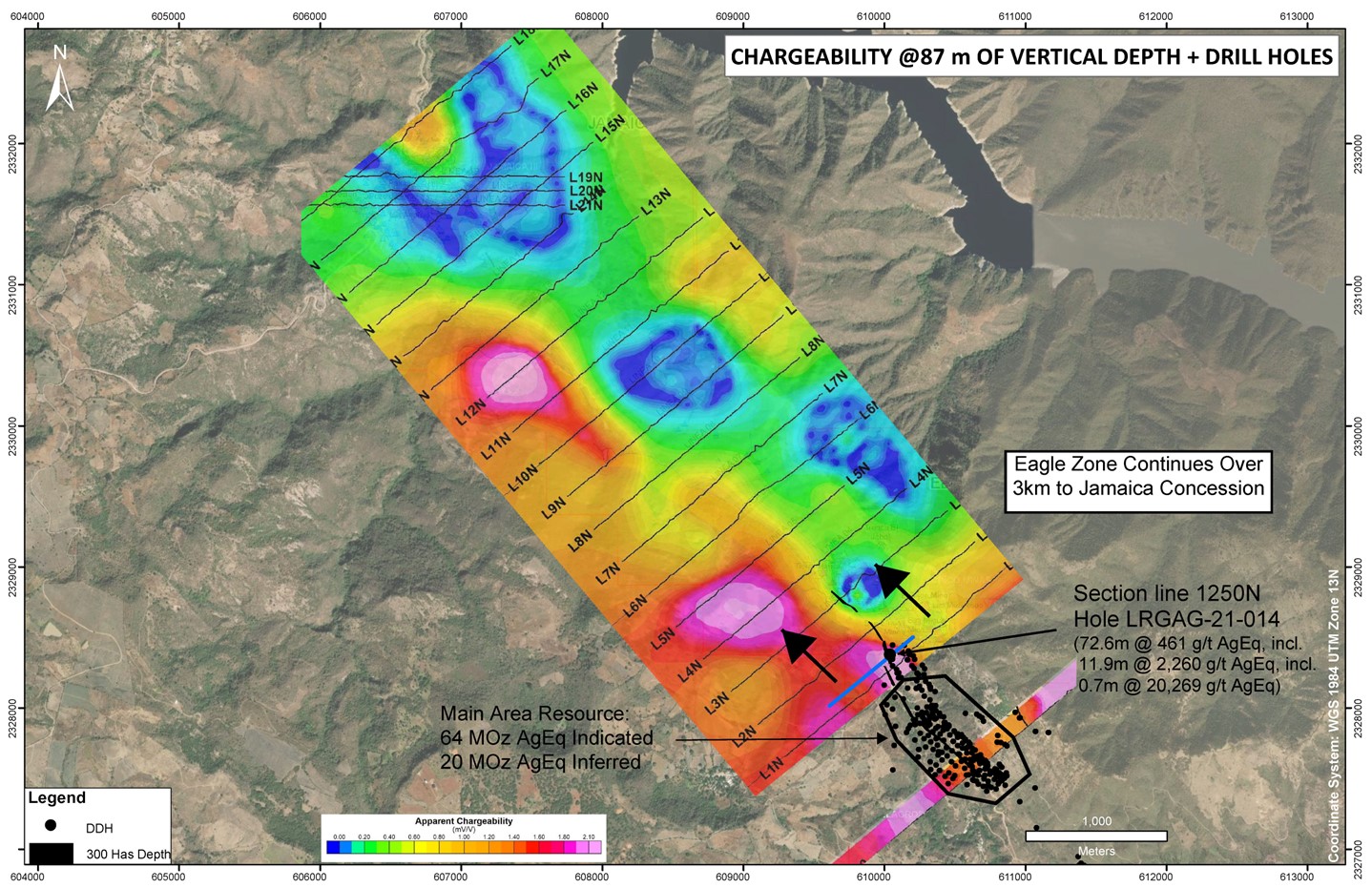 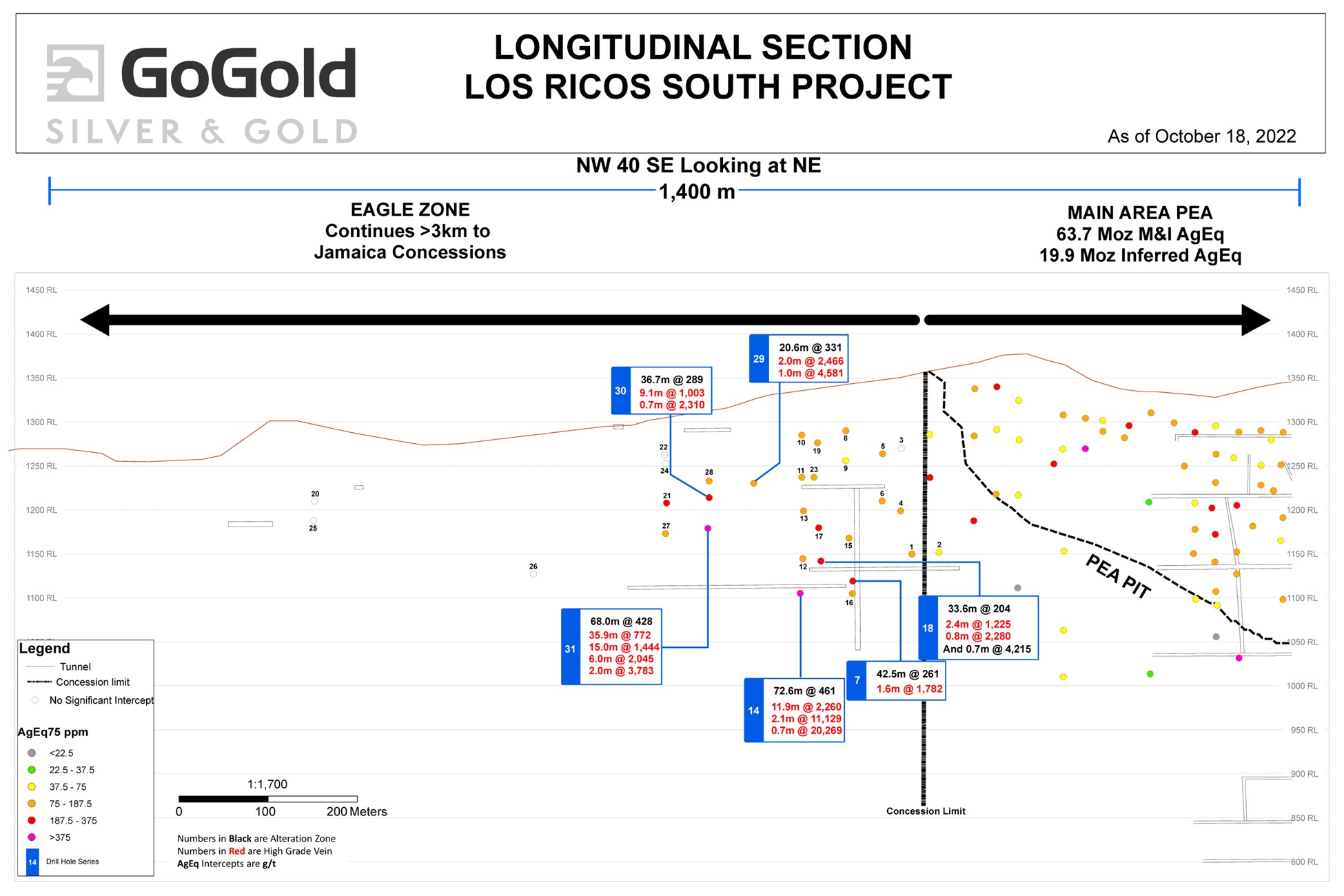 The Company exploration team has been completing detailed mapping and sampling at Jamaica over the last year and sees the same structure that was drilled in the main zone at Los Ricos South extending for several kilometres over the Jamaica concessions. This offers the potential for an additional bulk tonnage target in Los Ricos South, with continuity from the Main Area and Eagle. 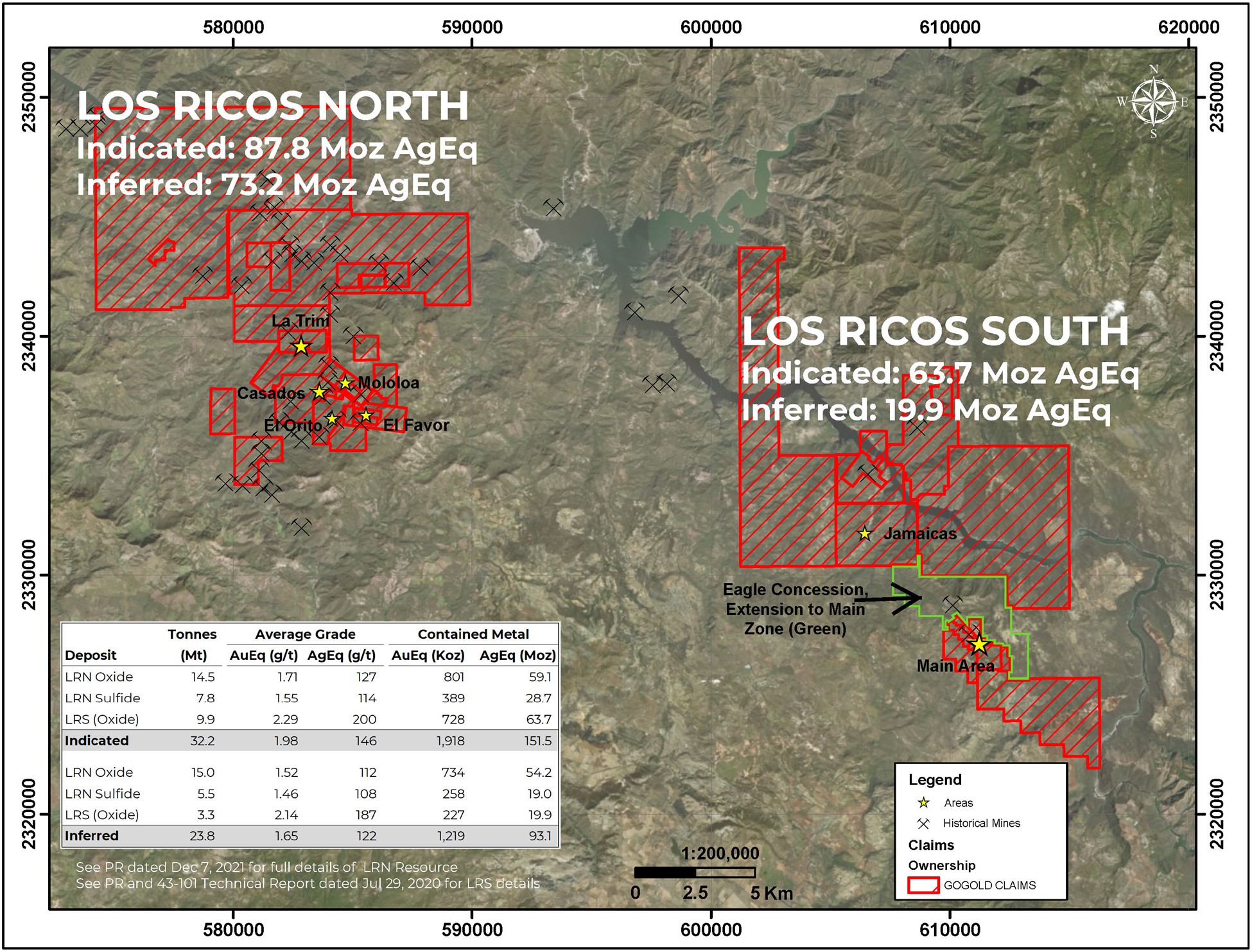 VRIFY is a platform being used by companies to communicate with investors using 360degree virtual tours of remote mining assets, 3D models and interactive presentations. VRIFY can be accessed by website and with the VRIFY iOS and Android apps.

GoGold Resources (TSX: GGD) is a Canadian-based silver and gold producer focused on operating, developing, exploring and acquiring high quality projects in Mexico. The Company operates the Parral Tailings mine in the state of Chihuahua and has the Los Ricos South and Los Ricos North exploration projects in the state of Jalisco. Headquartered in Halifax, NS, GoGold is building a portfolio of low cost, high margin projects. For more information visit gogoldresources.com.