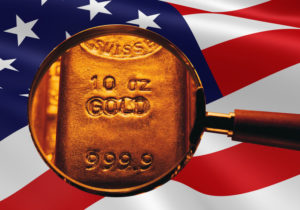 One of the most integral parts of recent economic analysis and one which carries important implications for the world of precious metals mining and investments is both anticipation of and reaction to monetary policy moves by US Federal Reserve Board.

All of this came quickly to mind as a result of one single important information release – the June 3, 2016 version of the “job creation” report for the month of May by the U.S. Department of Labor.  In this particular case, the Labor Department document showed only 38,000 new non-farm jobs were created during that month, the lowest such figure in more than five years.  In addition, and perhaps of greater long term consequence, the U.S. unemployment rate for May dropped to 4.7% only because the number of persons who have simply stopped actively seeking work and are therefore not counted as unemployed rose sharply to 538,000 in May.

The effects of this report were felt in the financial marketplace within minutes.

First, there had been speculation that the Fed would begin to raise interest rates during June since the economy appeared to be improving and it was therefore anticipated that the Fed could soon commence adjusting interest rates toward more normal – that is, higher – levels.  As soon as the above report was released, that speculation reversed itself in dramatic fashion since it then appeared likely the economy would require further stimulation in the form of lower, not higher rates.

Second, since higher domestic interest rates are normally considered to be supportive of a country’s home currency, in this case the US dollar, the abandonment of the anticipation of higher rates resulted in a sharp, almost immediate decline in the US Dollar Index quote from the previous day’s close just above 95.5 to a Friday opening slightly below 94 – a huge daily variation compared to normal currency market moves.

Third, as a result of this sharp drop in US dollar quotes, the Greenback-denominated prices for many commodity items rose sharply, since it would now require more US dollars to purchase a given quantity of a commodity.

As an example, gold soared at the opening of trading by more than US $30/oz; copper advanced by almost five full cents and silver gained about 35 cents per ounce in very early trading.  In addition, lumber gained about $5.00 per contract as the anticipation of lower mortgage rates suggested renewed strength in home building.

These powerful reactions by the metals to predicted Fed moves are not at all unusual in historic terms.  Over the past 30 years or more, Fed moves relating to interest rate policies have been most influential in terms of gold and silver price moves and this has been particularly true when fear of inflation has been an underlying factor.

Perhaps the starkest examples of the interrelation between interest rates, inflation and Fed moves took place between 1976 and 1981. As price inflation accelerated from mid-1976 forward, the price of precious metals began to soar at the exact same time as inflation-driven interest rates were on the rise, with the Fed being moderately inactive, reacting to events rather than directing them.

When inflation and interest rates peaked in the general vicinity of 20% in 1980, gold reached the summit of the 1976-80 bull market at about US $850/oz. After a short but sharp sell-off, gold rallied back toward that peak later in 1980, again exceeding US $700/oz – until the Reagan victory in early November of that year. From the moment of his election, the new President and his designated Secretary of the Treasury, Donald Regan, along with new Fed Chairman, Paul Volker, made fighting inflation their primary goal and vowed to use Federal Reserve policy as their primary weapon – and higher rates to slow down economic activity became their chief policy move.

Fed actions then quickly drove interest rates to a second peak near 20% in early 1981 and it was during this period that gold fell sharply and the public associated rising rates with poor precious metals performance, a concept which has been widely believed ever since.

Over the past three decades, there has been an identifiable relationship between Fed policy moves, interest rates and the price of gold in particular. It is my belief that until 1981, interest rates moved primarily as the result of natural market forces such as money supply growth, commercial demand for loans, individual savings rates and so forth, but since 1981, I believe that virtually every major move in interest rates has resulted from deliberate Fed actions.  In addition, it is indeed observable that precious smetals have moved contra to interest rates, generally rising when rates were falling and vice versa.

Since that time, a new anomaly has developed.  While both short and long term rates have fallen to historic low levels, the price of gold and silver has actually fallen sharply, and this combination has puzzled many precious metals observers since it apparently contradicts recent history.  However, one possible answer might lay in the fact that general fear of disinflation as evidenced by several central bank moves toward negative interest rates may be on the rise and, if that is true, then precious metals would likely perform poorly while at the same time the Fed would be pursuing lower interest rate strategies in order to stimulate economic activity.

While some uncertainties may have been recently added to the Fed/PM equation, one concept remains apparent in today’s economic world and that is the simple fact that Fed actions are widely followed and those actions can indeed have immediate and dramatic influence on our world of metals mining, trading and investment.

One other idea worth mentioning is the rapidity whereby announcements of intended Fed policies can sometimes be contradicted within weeks or even days.  Therefore, prudence requires that even closer than normal attention must be paid to this entire picture.