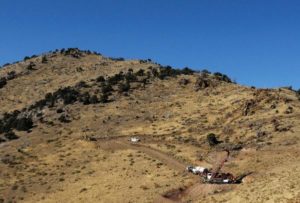 Gold Standard Ventures Corp. [GSV-TSX, GSV-NYSE] on Tuesday announced details of a $10.5 million private placement that will be used for continued exploration and early-stage development at the company’s 100%-owned Railroad-Pinion project in Nevada.

The company said it may also conduct a non-brokered private placement of 1.2 million shares at the offering price, raising proceeds of $2.5 million. Company insiders are expected to acquire securities under the private placement. However, the financing will be exempt from the formal valuation and minority shareholder approval requirements as neither the fair market value of any shares issued, or the consideration paid by Goldcorp or OceanaGold, will exceed 25% of Gold Standard’s market capitalization.

Gold Standard had previously budgeted US$25.8 million in 2018 for exploration on the Railroad-Pinion project, which covers 208 square kilometres, and features the newly discovered Dark Star deposit, the near surface oxide-gold Pinion deposit and classic Carlin-style North Bullion deposit.

The Pinion deposit now has a NI 43-101 compliant resource estimate consisting of an indicated mineral resource of 630,300 ounces of gold and an inferred resource of 1,081,300 ounces.

The Dark Star deposit, 2.1 kilometres to the east of Pinion, has a NI 43-101 compliant resource estimate consisting of an indicated mineral resource of 265,100 ounces gold and an inferred resource of 715,800 ounces. The North Bullion is a high-grade sulphide deposit, located 7 kilometres north of Pinion hosts 90,100 ounces gold in the indicated resource category and 805,800 ounces in the inferred category using a cut-off grade of 0.14 grams.

Gold Standard CEO Jonathan Awde recently said drilling results at the Dark Star deposit continue to show that the deposit is taking shape as a potentially exceptional opportunity. The company is hoping to prove that Railroad-Pinion can be the next successful mine on the Carlin Trend.

On August 23, 2018, the company released results from 25 reverse-circulation and two core holes at the Dark Star deposit and said an upcoming preliminary economic assessment of Dark Star “is likely to have a substantial impact on perceptions of shareholder value.”