Golden Arrow Resources Corporation (TSX-V: GRG, FSE: G6A, OTCQB: GARWF), (“Golden Arrow” or the “Company”) is pleased to announce that it has initiated its first diamond drilling program at the Libanesa Silver-Gold project in Santa Cruz province, Argentina. The program will drill up to 2,000 metres in holes ranging from 75 to 250 metres in depth, testing the Cerro Redondo, Lagunita and Lagunita West prospects.  Drills arrived at site and began drilling on March 16th.  The initial program should take about six weeks to complete.

“Our team has made excellent progress in the last few months confirming the previous prospects and delineating new targets at Libanesa.  We are pleased to now move into the first drill phase at this highly prospective project,” commented Brian McEwen, VP Exploration and Development for Golden Arrow.

Golden Arrow entered into an option to acquire a 75% interest in Libanesa in the fourth quarter of last year (see October 12, 2021 News Release.) Libanesa is a 14,500-hectare silver-gold (lead) project located at the northeastern margin of the Deseado Massif Gold-Silver metallogenic province, approximately 40 km northwest of the Cerro Moro Mine operated by Yamana Gold and 100 km northeast of the Don Nicolas mine operated by Cerrado Gold. Libanesa hosts several diversified geological, geochemical and geophysical supported targets.  Since entering into the definitive agreement for the project, Golden Arrow has been conducting a detailed surface program to refine the previously defined targets and evaluate more of the property.   To date, the technical team has collected 274 channel and rock chip samples by opening 20 trenches. See Figure 1 for the location of the main prospects and the planned drill hole locations. 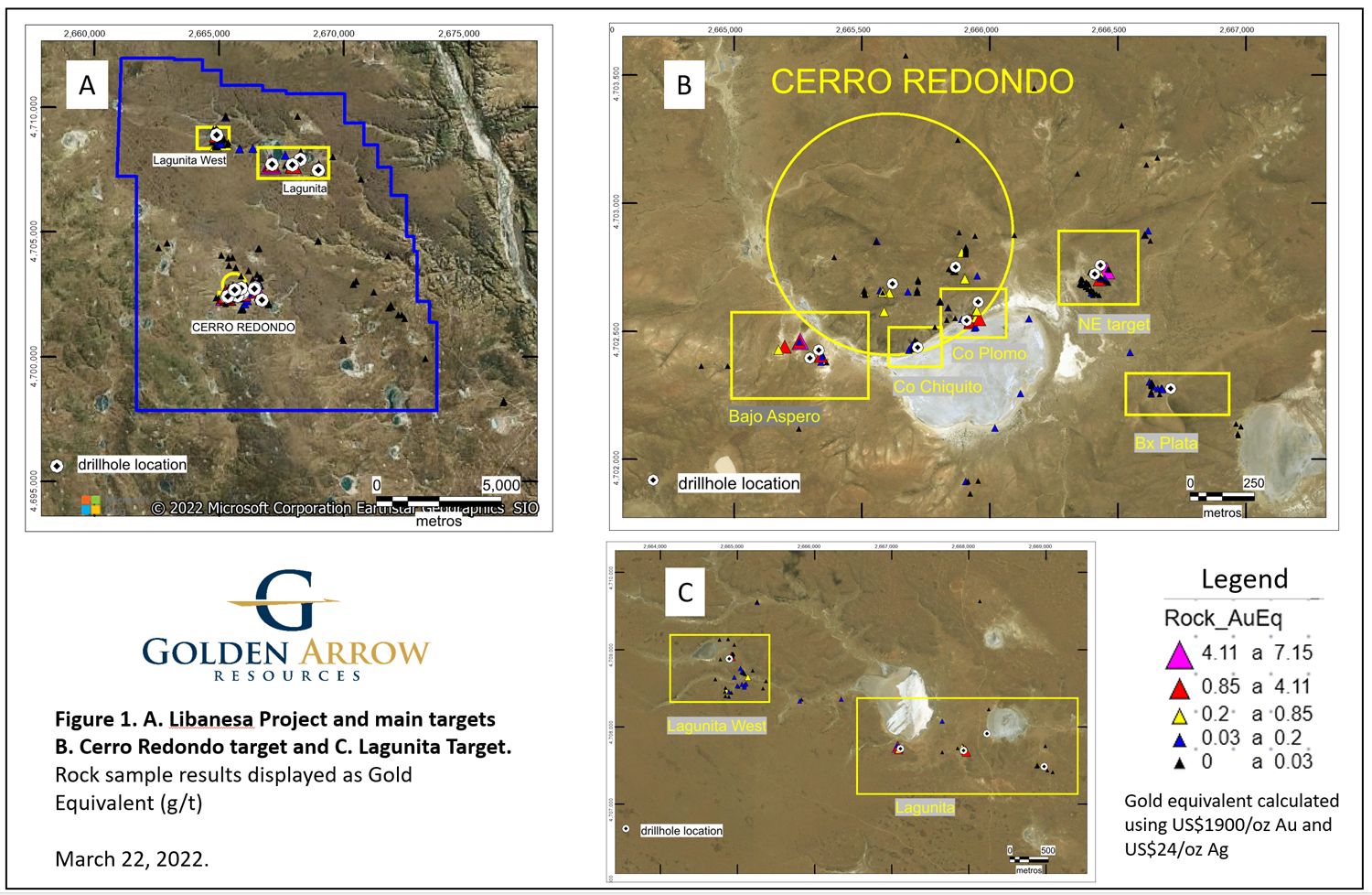 The Cerro Redondo prospect area includes a sub-circular feature, approximately one kilometre in diameter, that hosts multiple gold-silver-lead in rock anomalies inside and at its margins, plus additional targets within approximately 500 metres. Cerro Plomo is the principal target and is characterized by a well-mineralized gold-silver hydrothermal breccia that is exposed at surface and supported by both chargeability and resistivity geophysical anomalies at depth. The hydrothermal breccia is approximately 50 metres in diameter and is hosted in lapilli and crystal tuffs and pyroclastic breccias. Mineralization is mainly hosted in the matrix of the breccia with chip samples from the previous operator of up to 2.55 g/t Au and 2802 g/t Ag and channel samples of 11 metres @ 1.21 g/t Au and 13 g/t Ag. The recent detailed channel sampling by Golden Arrow also confirmed disseminated mineralization in the crystal tuffs with up to 0.32 g/t Au and 15 g/t Ag outside the main hydrothermal breccia. Thirteen drill holes from a total of eighteen are planned in the area of Cerro Redondo.

At the Libanesa project, trenches were dug perpendicular to the main trend of the structures and continued into the host rock on either side. Channel samples were cut along the trench walls with an electric saw and sampled based on geology. Samples were shipped for preparation and analysis at Alex Stewart Laboratories, an internationally recognized assay service provider at Perito Moreno in Santa Cruz province, where they were prepared and assayed for gold by Fire Assay/Atomic Absorption/gravimetry for gold and silver. Multi-element package by ICP-OES following a four-acid digestion was done in their laboratory in Mendoza.

The Company follows industry standard procedures for the work carried out on all its projects, with a quality assurance/quality control (QA/QC) program. Blank, duplicate and standard samples were inserted in each batch of samples sent to the laboratory for analysis. Golden Arrow detected no significant QA/QC issues during review of the data.

Golden Arrow continually acquires and explores a series of projects in order to identify the best opportunities to identify potentially economic resources and build value.  The following is a summary of recent work at the core projects.

On March 17, 2022, Golden Arrow announced the purchase of the San Pietro IOCG project in Chile.  The project has seen a significant amount of work that indicates near-term resource potential in addition to multiple areas with significant exploration upside, highlighted by drill results such as 28 metres averaging 1.14% Cu, 0.12g/t Au, and 335ppm Co, in RA-12-DH-003. The Company is commencing an exploration program that will work toward resource delineation at the Rincones zone, while continuing to evaluate and advance the four additional known targets and other areas of the property.

Golden Arrow recently completed a diamond drilling program at its Tierra Dorada gold project in Paraguay. The Phase II program included 46 drill holes totaling 1791.80 metres testing the Alvaro and Itayuru prospects.  Samples have been dispatched to the laboratory but complete assays are not expected until late April.

At the Rosales Copper project in Chile, the first program of drilling concluded late in 2021.  The program tested near-surface and deep conductive targets which were interpreted to exhibit the hallmarks of high-grade, stratabound or mantos-style copper deposits.  Results from the program did not confirm the interpretation.  Next steps for the project are being reviewed; there are no work commitments as all properties are 100% held or under application.

Finally, after completing detailed surface exploration, trenching and geophysical programs, Golden Arrow has relinquished its option for the Puzzle and Esperanza properties of the Flecha de Oro project in Rio Negro, Argentina. The Company determined that the results did not justify continued work, under the option agreement.   Golden Arrow retains its option for the 2,000-hectare Maquinchao property, for which work permits and surface agreements were recently approved.  The Company is evaluating next steps for the property; there are no minimum work commitments.

The exploration programs are designed by the Company’s geological staff and results are reviewed, verified (including sampling, analytical and test data) and compiled under the supervision of Brian McEwen, P.Geol., VP Exploration and Development to the Company.  Mr. McEwen is a Qualified Person as defined in National Instrument 43-101 and has reviewed and approved the contents of the news release.

Golden Arrow Resources Corporation is a mining exploration company with a successful track record of creating value by making precious and base metal discoveries and advancing them into exceptional deposits. The Company is well leveraged to the price of gold, having monetized its Chinchillas silver discovery into a significant holding in precious metals producer SSR Mining Inc.

Golden Arrow is actively exploring a portfolio that includes an epithermal gold project in Argentina, a districtscale frontier gold opportunity in Paraguay, a base-metal project in the heart of a leading mining district in Chile and more than 180,000 hectares of properties in Argentina.

Forward-looking statements are subject to a number of risks and uncertainties that may cause the actual results of the Company to differ materially from those discussed in the forward-looking statements and, even if such actual results are realized or substantially realized, there can be no assurance that they will have the expected consequences to, or effects on, the Company. Factors that could cause actual results or events to differ materially from current expectations include, among other things: the impact of COVID-19; risks and uncertainties related to the ability to obtain, amend, or maintain licenses, permits, or surface rights; risks associated with technical difficulties in connection with mining activities; and the possibility that future exploration, development or mining results will not be consistent with the Company’s expectations.  Actual results may differ materially from those currently anticipated in such statements. Readers are encouraged to refer to the Company’s public disclosure documents for a more detailed discussion of factors that may impact expected future results. The Company undertakes no obligation to publicly update or revise any forward-looking statements, unless required pursuant to applicable laws.