â€œWith this acquisition Golden Arrow has secured full control of a project that exhibits an excellent value proposition, with near-term resource potential and multiple areas with exploration upside.Â  We accomplished this acquisition by taking advantage of the strong financial position that resulted from our last successful transaction.Â  In fact, using the leverage from Golden Arrowsâ€™ SSR Mining Inc. shareholding from November when our proposal was accepted to closing, saw an increase of approximately $7.00/ share from $19.00 to $26.00 which completely covered the purchase cost of the project, leaving us still with a strong cash position.Â  Now our technical team will try to do as they did with our Chinchillas Project in Argentina and advance a strategically located exploration project to pre-feasibilityâ€, commented Joseph Grosso, Golden Arrow’s Executive Chairman, President and CEO.

Golden Arrowâ€™s Vice President, Exploration and Development, Brian McEwen, added, â€œThere is an incredible opportunity here for Golden Arrow and our investors.Â  There has been little, or no work done on the Project since 2014. Since that time the prices of copper, gold, iron and especially cobalt have all increased greatly. Previous evaluations were based largely on copper only.Â  Our initial review indicates each of these could play an important role in the overall potential economics. We also identified several targets within the 18,000 hectares which will be the focus of our initial exploration.â€

The San Pietro Project has had nearly US$15 million in exploration work by previous owners, including over 34,000 metres of drilling, over 1,000 surface samples and multiple geophysical surveys. Of the Projectâ€™s five main target areas, the Rincones target has been the primary focus of the historic work, with multiple drill holes returning assays with significant copper, gold and cobalt values, including: 28 metres averaging 1.14% Cu, 0.12g/t Au, and 335ppm Co, in RA-12-DH-003.

Golden Arrowâ€™s due diligence review confirmed the considerable potential of the known targets and identified areas where new interpretations and additional work are expected to improve the prospects.Â  The 2022 work program will work toward resource delineation at Rincones, while continuing to evaluate and advance the four additional known targets and other areas of the property.

The San Pietro Project includes 18,448 hectares of exploration and exploitation concessions in the Atacama region of Chile, approximately 100 kilometres north of Copiapo in an active mining district that is home to all the major IOCG deposits in Chile. There is excellent mining infrastructure in the area, and the property is situated immediately adjacent to the west of Capstone Miningâ€™s Santo Domingo mine development project and 10 km northeast of Mantos Copperâ€™s Mantos Verde mine (see Figure 1). Capstone Mining Corp. and Mantos Copper Bermuda Limited are currently completing a business combination. Proximity to other mining projects in the area does not provide any assurances with respect to the prospects at the San Pietro Project. 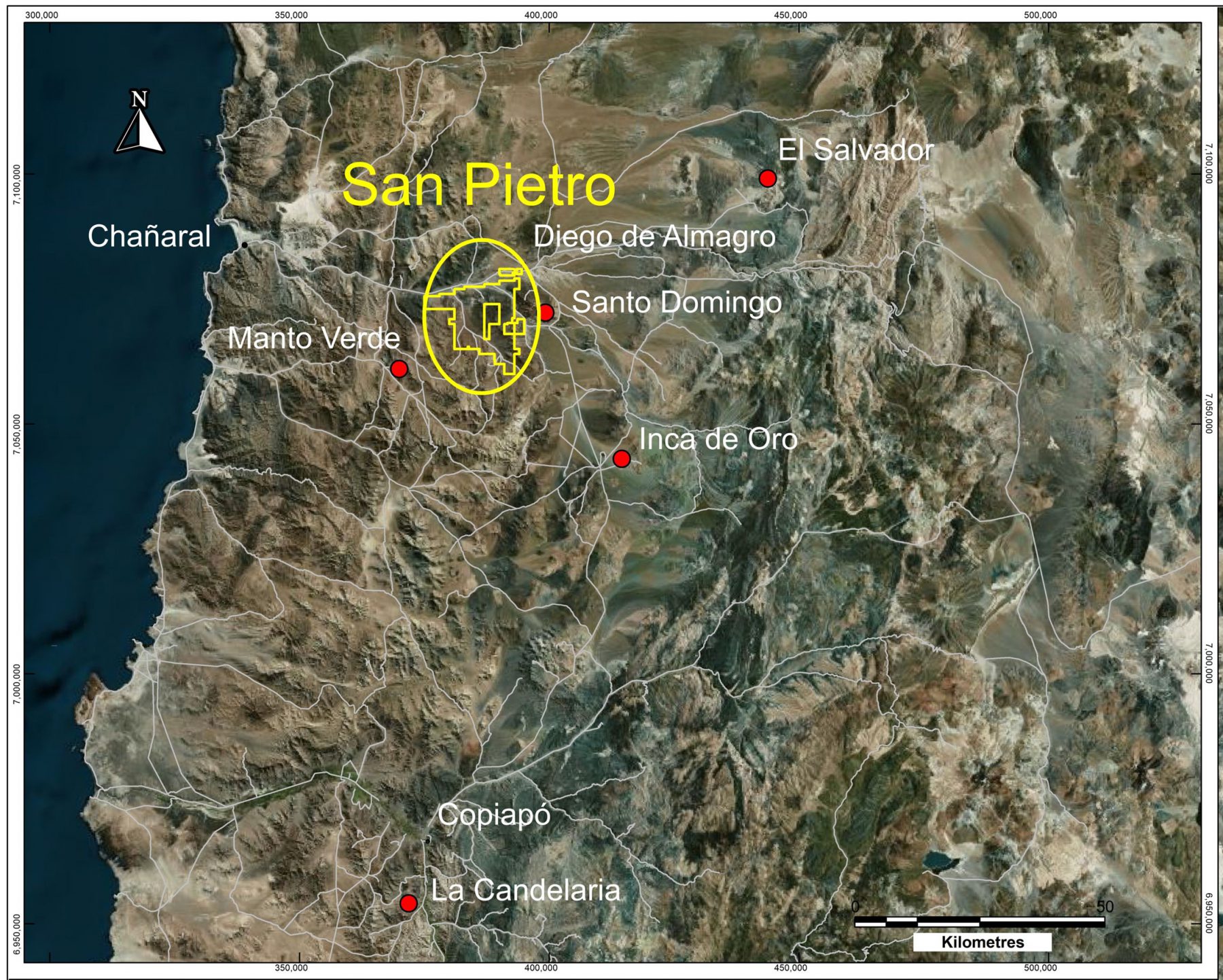 The San Pietro Project has an extensive database that includes results from over 34,000 metres of drilling plus over 1,000 surface samples and multiple geophysical surveys, which have been compiled to identify four main target areas (see Figure 2). The Rincones target, the focus of the historic work, has returned drill hole assays with significant copper, gold and cobalt values, including: 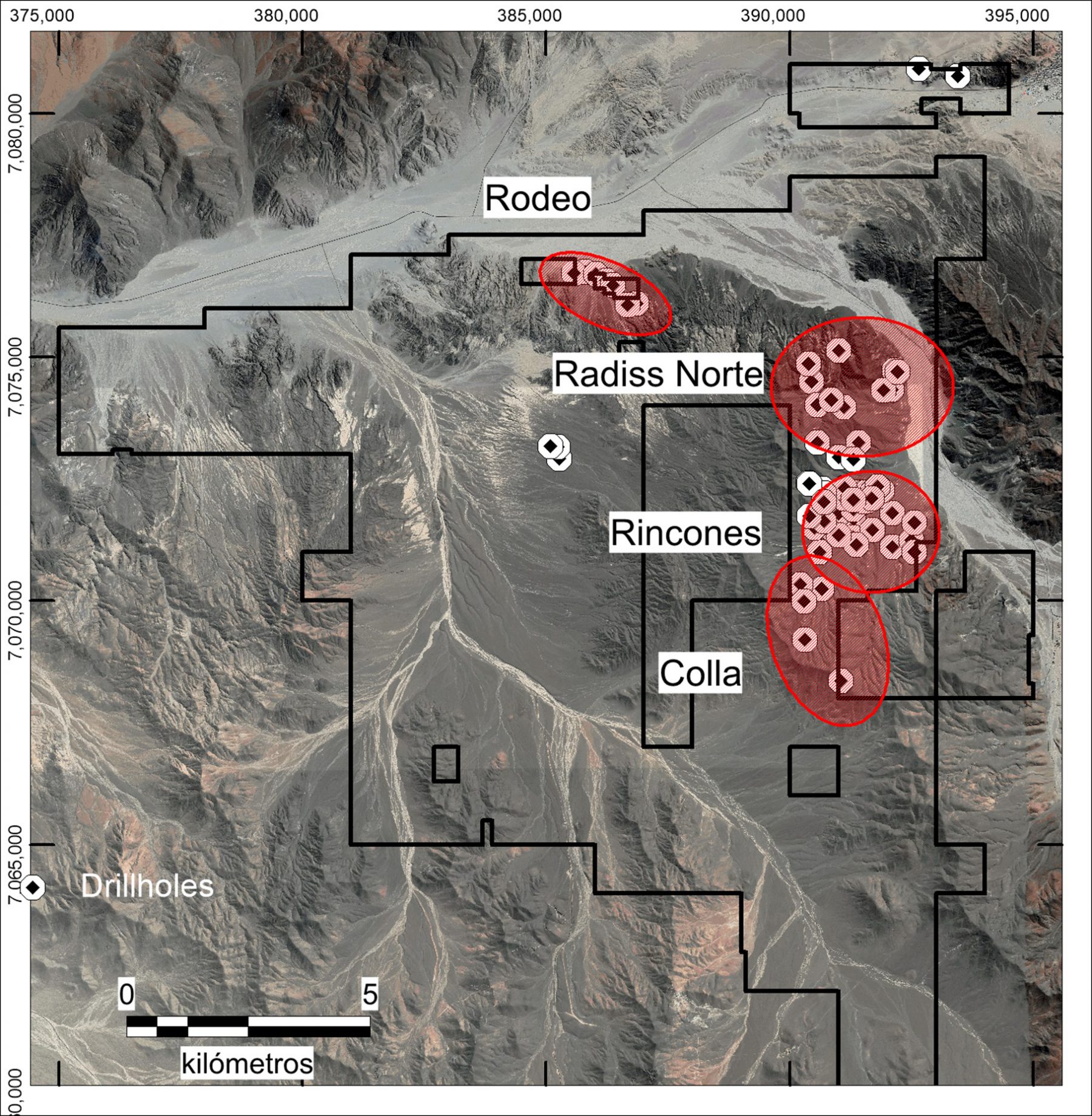 Golden Arrowâ€™s due diligence review confirmed the considerable potential of the known targets and identified areas where new interpretations and additional work are expected to improve the prospects.Â  The 2022 work program will work toward a resource delineation program at Rincones, while continuing to evaluate and advance other areas of the property.Â  This includes the Colla area located at 2.3 km SW of Rincones, with only four holes, and all showing significant cobalt grades drilled at wide spacing over a strike length of 2.2 kilometres.

The Rodeo target area, which is located 7.5 km NW of Rincones, has the following drill hole with a significant copper/cobalt intercept:

And the Radiss Norte target, located at 2.7 km north of Rincones, near surface mineralization with:

The Company plans to review the existing data from all over the Project and develop an exploration plan to test their full potential.

*This drilling was carried out by previous operators and has not been independently verified by the Companyâ€™s Qualified Person. Reported intervals are core lengths and true thickness has not been estimated at this time.Â

The San Pietro Project is hosted in different andesites units as part of the Cretaceous volcano-sedimentary sequence associated with intrusive rocks such as granodiorites and diorites of similar age. The Project is located east of the Atacama Fault system, a major north-south regional structure, which was instrumental in the emplacement of the ore deposits in the area.

Mineralization at San Pietro is typical of an IOCG system with copper-gold-iron-cobalt minerals in breccias, veins and mantos within a zone of K-feldspar-chlorite alteration. These structures are rich in magnetite and specularite and in some cases associated with calcite and were mainly developed along NW-SE lineaments.

RCI Capital Group acted as financial advisor to SMM Chile in the sale process. Golden Arrow submitted a successful proposal of US$3,350,000 in cash for 100% of the property. Consideration was given to the fact that the Company would be accepting risk in paying in full up front. However, given the positive impressions from due diligence and the fact that approximately US$15,000,000 has been spent on the property by previous owners, the Company felt very comfortable to proceed as this acquisition has potential to build value for shareholders as we advance it through 2022 and beyond.

The purchase price for the San Pietro Project is US$3,350,000 in cash payable at Closing.

The technical portions of this news release have been reviewed and approved by Brian McEwen, P.Geol., VP Exploration and Development to the Company and a Qualified Person as defined in National Instrument 43-101.

Golden Arrow Resources Corporation is a mining exploration company with a successful track record of creating value by making precious and base metal discoveries and advancing them into exceptional deposits. The Company is well leveraged to the price of gold, having monetized its Chinchillas silver discovery into a significant holding in precious metals producer SSR Mining Inc.

Golden Arrow is actively exploring a portfolio that includes an epithermal gold project in Argentina, a districtâ€‘scale frontier gold opportunity in Paraguay, a base-metal project in the heart of a leading mining district in Chile and more than 180,000Â hectares of properties in Argentina.

This news release may contain forward-looking statements. Â Forward-looking statements address future events and conditions and therefore involve inherent risks and uncertainties. All statements, other than statements of historical fact, that address activities, events or developments the Company believes, expects or anticipates will or may occur in the future, including, without limitation, statements about the Companyâ€™s plans for its mineral properties; the value, resource potential and exploration upside of the San Pietro Iron-oxide Copper Gold (IOCG) Project; the ability to advance the Project to pre-feasibility; the potential opportunity for shareholders; the role of various minerals in expected Project economics; the 2022 work program; the Companyâ€™s business strategy, plans and outlooks; the future financial or operating performance of the Company; and future exploration and operating plans are forward-looking statements.Â

Forward-looking statements are subject to a number of risks and uncertainties that may cause the actual results of the Company to differ materially from those discussed in the forward-looking statements and, even if such actual results are realized or substantially realized, there can be no assurance that they will have the expected consequences to, or effects on, the Company. Factors that could cause actual results or events to differ materially from current expectations include, among other things: the impact of COVID-19; risks and uncertainties related to the ability to obtain, amend, or maintain licenses, permits, or surface rights; risks associated with technical difficulties in connection with mining activities; and the possibility that future exploration, development or mining results will not be consistent with the Companyâ€™s expectations.Â  Actual results may differ materially from those currently anticipated in such statements. Readers are encouraged to refer to the Company’s public disclosure documents for a more detailed discussion of factors that may impact expected future results. The Company undertakes no obligation to publicly update or revise any forward-looking statements, unless required pursuant to applicable laws.