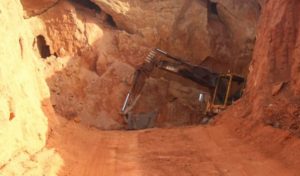 Shares of Goldex Resources Ltd. [GDX-TSXV], a company that recently attracted the attention of regulators in Germany and British Columbia, have resumed their upward march on the TSX Venture Exchange. On Thursday, April 19, the shares were up 32% or 35 cents to $1.45 on volume of 149,447, regaining some of the ground that wasÂ  lost when the British Columbia Securities Commission issued a halt trading order on March 20, the day that the shares reached a 52-week high of $2.56. On Friday, Goldex shares were up 17.2%, or $0.25, to $1.70.

Goldex is a junior exploration company with properties in Mali, West Africa and Guatemala.

On March 1, the BCSC said it had become aware that the Federal Supervisory Authority of Germany (BaFin) had issued a warning to investors about Goldex, stating that “buy recommendations are currently being issued for shares in Goldex via e-mail market letters.”

According to the BCSC, BaFin had evidence indicating that the buy recommendations contained false and misleading information and/or that existing conflicts of interest are wrongfully concealed.

It should be noted that neither the BCSC nor BaFin have implied any wrongdoing on the part of anyone connected with Goldex, its management team or board of directors.

On February 28, 2018, Goldex said it was aware that BaFin had issued a notice stating that it has initiated an investigation into suspected market manipulation of the shares.

On March 20, 2018, the BCSC issued a halt trading order that remained in effect until it expired on April 13, 2018. However, trading did not resume until four days later, on April 17.

In its press release on February 26, 2018, Goldex said signatories to the joint venture are Geo-Sys-Tech S.A.R.L. and RexMetal S.A.R.L.

Goldex said GEO has the right to acquire a 90% interest in the license for 750,000 Euros, of which 350,000 Euros has been paid. It went on to say that GEO had established an exploration program over the Korokoro license area and has obtained a small-scale mining license under which it can produce up to 15 kilograms of gold per month.

Under the terms of the small scale mining license, GoldexÂ  said GEO has set-up, and is operating a pilot plant capable of processing 10 tonnes per hour.

Under the terms of the joint venture, GEO and REX agreed to transfer their interests in a new company to be incorporated, while Goldex would become the operator with a 51% interest in the joint venture and the license.

“It is the intention of the joint venture to further develop the property and apply for a large-scale mining license,” Goldex said.

On March 19, 2018, Goldex released another update saying that the company set out to identify a project in West Africa with the potential to create the foundation for a significant gold mining company.

It noted that Mali is the third largest gold producer in Africa and hosts several world class mines with greater than four million ounces of gold in resources and has a strong mining culture.

“With exploration drilling having been completed to a 30-metre depth, GEO’s development plan for the Korokoro property calls for a simple conventional open pit mining and gravitational processing of heavy mineral ores with a mobile beneficiation plant to enable ecological and low-cost production,” Goldex said.

The Korokoro property is located by 54 km from Randgold Resources Ltd. [GOLD-NASDAQ, LSE] Morila Mine, which has produced over seven million ounces of gold. Other mines in the area include Iamgold Corp.’s [IMG-TSX, IAG-NYSE] Sadiola Mine.