Yannis Tsitos, President, commented, “These first deeper drill holes at Salbora improve our understanding of the previously announced high-grade results, which included trenching and shallow sonic core drilling. Surface projection of gold mineralization to depth is apparent and remains open in all directions. These diamond drilling results indicate the potential to delineate a near surface, wide, high-grade gold deposit at Salbora which would expand the current resources at Eagle Mountain. Hole EMD18-053 is the Company’s best drill hole to date on the Project. The Company is starting a step out diamond drilling program on 50 to 100 metre centres along the suggested strike of Salbora to test continuity of high-grade mineralization and further increase our understanding of the overall grade and size of this discovery.”

The following table sets out the detailed results for the Company’s first two diamond core holes EMD18-052 and 53 (uncut, undiluted): 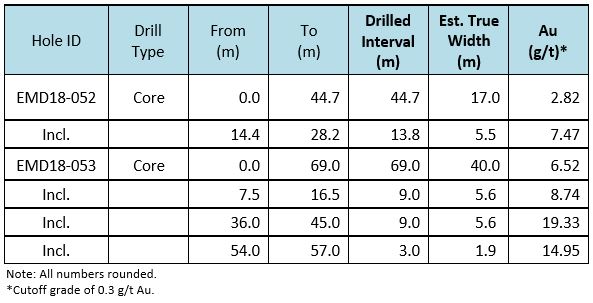 All geochemical analyses were completed by Actlabs Guyana Inc. in Georgetown, Guyana.

The Salbora discovery is located within a northwest-southeast regional structural trend several kilometres in length. Locally, the high-grade mineralization at Salbora is found within a wide near-vertical shear zone hosted in Guyanese Shield greenstones of metavolcanics and metasediments, intruded by granitoids. Gold mineralization is associated with quartz veining, stockwork and breccia within the shear zone and appears to generally correlate with disseminated sulphide (primarily pyrite) content within the hard rock, which is mainly mafic volcanics. At Salbora, saprolite is an estimated 15 to 35 metres thick.

To date, Goldsource has completed two diamond core holes (173 metres) as presented in this news release, 14 sonic shallow core holes (161 metres), 113 shallow auger drill holes (436 metres) and 11 horizontally and vertically sampled trenches (928 metres) at Salbora. Please refer to 2018 news releases dated May 24, July 12, and October 25 for previous results on Salbora. All results with gold mineralization are considered near surface and several drill holes ended in gold mineralization. Several additional auger and sonic core holes are pending results and will be reported, once they are received and compiled. Step out diamond core drilling of approximately 1,500 metres (10 to 15 holes) is planned for Salbora in H1, 2019.

The Qualified Person under National Instrument 43-101 – Standards of Disclosure for Mineral Projects for this news release is N. Eric Fier, CPG, P.Eng, Executive Chairman and Chief Operating Officer for Goldsource, who has reviewed and approved its contents.