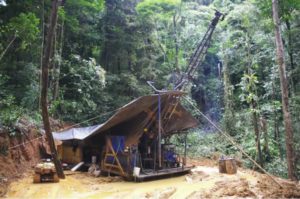 Goldsource Mines Inc. [GXS-TSXV] reported on Phase I commissioning activities at its 100%-owned Eagle Mountain Gold Project located in Guyana, South America. Outlined below is a summary of the most significant activities completed year to date including start of commissioning, the first metal pour and first gold sale.

Phase I is based on a Preliminary Economic Assessment (PEA) dated June 15, 2014, which calls for a 1,000Â tonnes per day (tpd) open pitÂ – gravity plant with post-commissioning and ramp up cash operating costs of US $500 to US $600 per ounce of gold.

Yannis Tsitos, President, said, “We are very pleased with our progress during Q1, 2016. All major equipment continues to operate well in both dry and wet conditions. Onsite personnel have been able to maintain infrastructure with minimal cost and disruption to operations. The Company expects to add a second excavator in Q2, 2016 and with planned installation of a larger feed pipe to the scrubber, the Phase I design rate of 1,000 tpd of continuous production at Eagle Mountain should be achieved in Q2, 2016. We currently have CAD$1.4 million to meet our working capital requirements and complete planned expansion over the next several months.”

Commercial production is anticipated in the second quarter of 2016, which will require achieving 80% of the 1000 tpd nameplate capacity and 45% recovery in gold concentrate on average over a period of 30 days.

Highlights for Year to Date (Commissioning-Stage)


Management continues to optimize the operation with peak daily throughput of approximately 777 tonnes processed. Estimated gravity recovery to concentrate increased from an estimated 40% in February to currently 50%. The average tpd from April 1 to April 17 was 470 or 47% of nameplate capacity. Significant increased capacity is anticipated in the next 30 days with the installation of a re-designed larger diameter feed chute to the scrubber, which is currently limiting daily production.

The average grade of the compliant saprolite resource is 1.2 g/t gold. As anticipated, the current grades are lower at 0.6 to 0.8 g/t gold as tonnes were mined from areas close to the scrubber for testing and commissioning purposes. Mine grades should start to increase over the next 30 days as mining transitions into a higher grade portion of the resource.

The tailings storage facility is expected to be sufficient to support operations for the next six months before expansion is required. In addition, the Company has constructed a clarification pond to reduce water turbidity prior to planned recycling or discharge.

The company continues to evaluate the potential to utilize low impact intensive cyanide leaching of the gold concentrates to improve the overall gold recovery and production for the Eagle Mountain Gold Project.