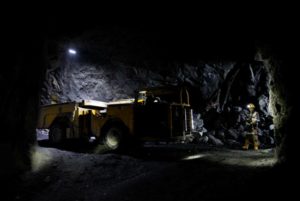 Gran Colombia Gold Corp. [GCM-TSX; TPRFF-OTCQX], the largest underground gold and silver producer in Colombia, has two producing mines in the South American country. Together, the flagship Segovia operation 130 kilometres northeast of Medellin, and the Marmato Mine, 80 kilometres south of Medellin, produced 55,260 ounces of gold in the fourth quarter of 2018, up 7% over Q4-2017. This brings total annual gold production for 2018 to 218,001 ounces, up 25% over 2017. Fuelled by its high-grade Segovia Operations, the company expects to produce between 210,000 and 225,000 ounces for 2019.

Exploration and development activities are continuing at both the Segovia and Marmato mines with a view to expanding mineral reserves and resources and ultimately increase production and mine life. At Segovia, there are 24 known veins not currently being mined, on which very little exploration was carried out historically. Some 27,000 metres of drilling were completed at Segovia in 2018. This has paid off as the company reported that in-fill drilling at Segovia identified a new high-grade structure at the Sandra K Mine, interpreted as a splay off the Techo Vein and termed the 6640 Vein. Multiple high gold grades were generated from 23 drill holes (2,394 metres) drilled from underground on the main vein system with maximum grades of 17.18 g/t gold and 33.6 g/t silver over 0.71 metres on the Sandra K Techo Vein, and 175.15 g/t gold with 1,223.0 g/t silver over 0.50 metres on the 6640 Vein, the new splay off the Techo Vein.

In addition, multiple high gold grades were intersected from two underground stations on the Providencia vein system west of the current mine development with assays ranging up to 110.96 g/t gold and 80.8 g/t silver over 2.34 metres. The Company will be completing another 20,000 meters of drilling at Segovia in 2019, focusing increasingly of Segovia’s blue sky potential.

At the 100%-owned Marmato Mine, drilling has also returned encouraging assays. For example, in mid-December 2018, the company reported high gold grades generated from nine drill holes totaling 2,923 metres including drill hole MT-IU-009 which intersected 74.78 metres of 4.26 g/t gold and 5.5 g/t silver from 323.60 to 398.38 metres. This drilling has confirmed and extended the high-grade zone of Deeps-style mineralization over 450 meters along strike and to more than 300 vertical metres below the deepest level of current mining operations.

At the company’s Zancudo Project 27 km south of Medellin, IAMGOLD Corp., which can earn a 70% interest, has identified a promising new manto structure in the North Zone and is continuing their drilling campaign.

Gran Colombia made its first step outside Colombia in 2018, acquiring an approximately 17% equity stake and board seats in Sandspring Resources Ltd. (SSP-TSXV), adding exposure to its 10.4 Mozs undeveloped gold deposit at its Toroparu Project in Guyana.

With Gran Colombia now upgraded from B- to B by Fitch Ratings, increased production, revenue, earnings and resources, coupled with stable costs, the company is well poised for continued success.