Great Atlantic Resources Corp. (TSXV-GR)  announced today it has completed initial rock and soil sampling during May to early June at its Golden Promise Gold Property in central Newfoundland. A total of 62 rock sample and 158 soil samples have been submitted for analysis. The Company has also surveyed sites for an excavator trenching program scheduled to begin in two weeks, being part of a budgeted 2017 $700,000 exploration program on the property. The company has received a trenching permit from the Newfoundland and Labrador Department of Natural Resources. Diamond drilling is scheduled to begin on the property in July pending receipt of a diamond drilling permit. The Golden Promise Property was recently expanded to the current approximate 16,500 hectares. 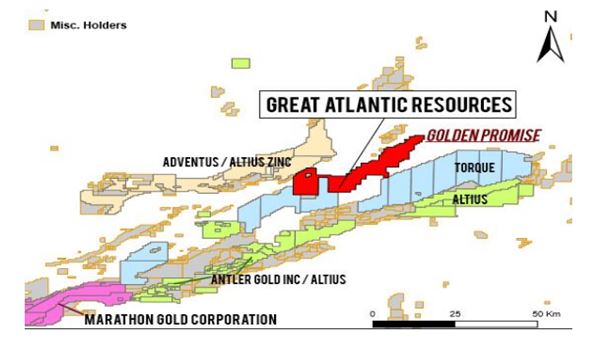 The Golden Promise Property hosts multiple gold-bearing quartz veins and gold-bearing float boulders. The majority of historic work has been conducted at the Jaclyn Main Zone in the central region of the property. A National Instrument (NI) 43-101 compliant inferred resource of 921,000 tonnes at an average grade of 3.02 g/t Au (89,500 ounces contained gold) was reported in 2008 for the Jaclyn Main Zone. Gold recovery from a 2,241 tonne bulk sample collected in 2010 at the Jaclyn Main Zone was reported to average 4.47 g/t Au. The average tails grade for the sample was reported to be 1.12 g/t Au. A “back-calculated head grade of 5.59 g/t Au” was reported for the bulk sample. The Jaclyn Main Zone has been reportedly traced for a strike length of approximately 800 meters (northeast to east striking) through trenching and diamond drilling and locally to approximately 420 meters vertical depth.

Trenching at the Jaclyn North Zone will test the extension of the gold bearing veins along the projected strike northeast of previous drill holes and trenches. The northeast striking Jaclyn North Zone has been reportedly traced by diamond drilling (13 holes) for approximately 450 meters and locally to a vertical depth of 175 meters.  The zone is reported to contain 3 quartz veined sub-zones.  Reported drill hole intersections include:

The Company collected samples of quartz float boulders during early June in the area of the planned Jaclyn North trenches.

Trenching at the Jaclyn South Zone will test the extension of gold bearing veins along the projected strike northeast of previous drill holes and trenches. The Jaclyn South is reported to strike slightly northeast consisting of two subparallel quartz veins. Previous diamond drilling in this zone consisted of four holes.  The best reported drill hole intersection was in hole GP03-31 (44.59 g/t Au / 0.30 m). The Company collected one quartz float boulder sample at the location of a planned trench.

The Company also collected rock samples and soil samples in multiple additional areas within the property during May to early June. One area of sampling was the area of reported gold bearing quartz boulders in the northern part of the property referred to as the Branden Zone. Historic float samples were reported to return 20.5, 22.6, 62.6, 72.1 and 80.0 g/t Au. The source of these reported gold bearing boulders has not been determined. Great Atlantic collected quartz float boulder samples and soil samples in this region. The Company collected bedrock grab samples from a trench at the Jaclyn West Zone (also referred to as the Christopher Zone). The Jaclyn West Zone is reported to be approximately 400 m west-southwest of the Jaclyn South Zone. A historic grab sample of quartz vein subcrop at this zone was reported to return 3.8 g/t Au. A historic grab sample of quartz vein outcrop from the trench was reported to assay 1.96 g/t Au. The quartz vein in the trench was reported to have a 35 metre strike length. Two historic diamond drill holes at the Jaclyn West Zone were reported to intersect quartz veining but with insignificant amounts of gold. The Company collected a chip sample across the Shawn’s Shot quartz vein and collected soil samples in this area. High grade gold has been reported at the Shawn’s Shot occurrence including a historic grab sample reported to return 100.5 g/t Au.

The Company collected float boulder and outcrop grab samples plus soil samples in the central region of the property north and south of the Jaclyn Zones. Analyses are pending for all 2017 rock and soil samples.

The 2008 NI 43-101 Technical Report states the style of veining, mineralization, alteration, host rock and tectonism at Golden Promise most closely resembles other turbidite-hosted (or slate belt) gold deposits throughout the world.

Access is excellent with a paved provincial highway transecting the property. The property is located near the town of Badger and approximately 50 kilometres northeast of the Valentine Lake Property of Marathon Gold Corp.