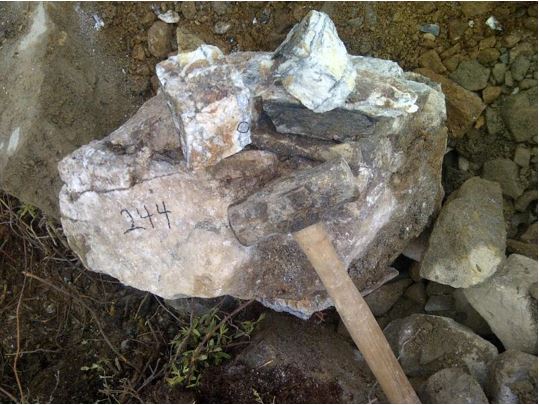 The recent trenching program was conducted in areas of gold bearing quartz vein zones at the Jaclyn North and Jaclyn South Zones. The Jaclyn North Zone is reported approximately 250 metres north of the Jaclyn Main Zone. Four trenches were completed testing the extension of the Jaclyn North Zone east of historic trenches and diamond drill holes along the projected strike of the reported gold bearing veins. Trench 1 (western most of the four trenches) is located approximately 30 metres east of the eastern-most drill hole.  Trenches 2, 3 and 4 were excavated approximately 40, 75 and 230 metres east of Trench 1. Overburden encountered in these three trenches was deep (at least 3 to 4 metres deep) with only minimal sporadic bedrock intersected. Quartz vein boulders were locally intersected within the overburden in these trenches. Samples were collected from multiple boulders. Ten quartz vein boulder grab samples from the trenches exceeded 1.0 g/t gold, listed in the following table:

Visible gold was observed by Company personnel in samples GP-R-17-209, 239, 244 and 245. Company management has prioritized the area of Trench 4 given the multiple high grade angular quartz boulders observed within this trench. This trench is also a significant distance east (approximately 260 meters) of the eastern-most historic Jaclyn North drill hole. Company management are interpreting the area of Trench 4 as a distinct new gold target.

Although bedrock was not intersected for most of Trench 1, it did expose bedrock hosting a quartz vein in one location. This approximately east striking, north dipping quartz vein was measured to be up to 1.24 metres wide in the trench. Channel samples were collected across this vein. A 0.20 meter channel sample across one section of the vein returned 0.691 g/t Au. The other channel samples returned anomalous values for gold of 0.01 to 0.141 g/t. Angular quartz boulder sample GP-R-17-245 (208.51 g/t Au) was collected at this location in Trench 1 within 1 meter of bedrock and the quartz vein. 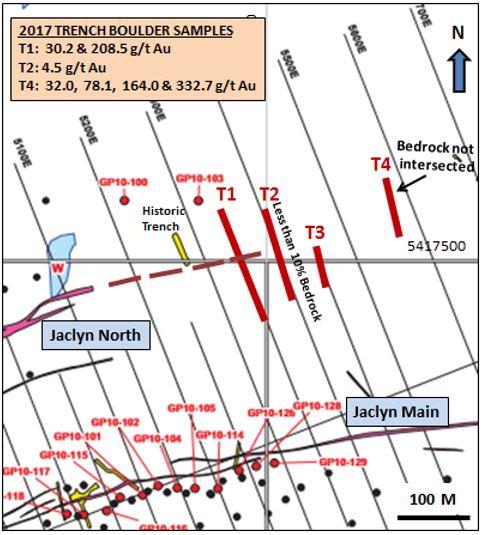 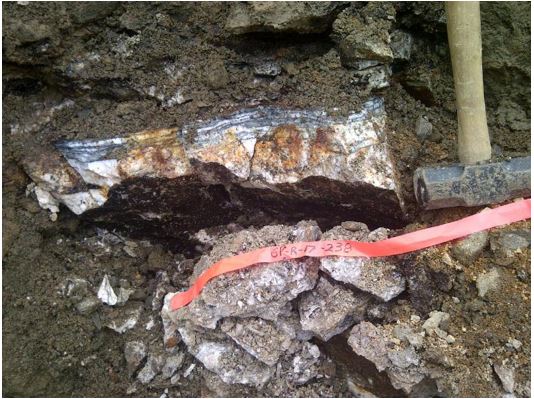 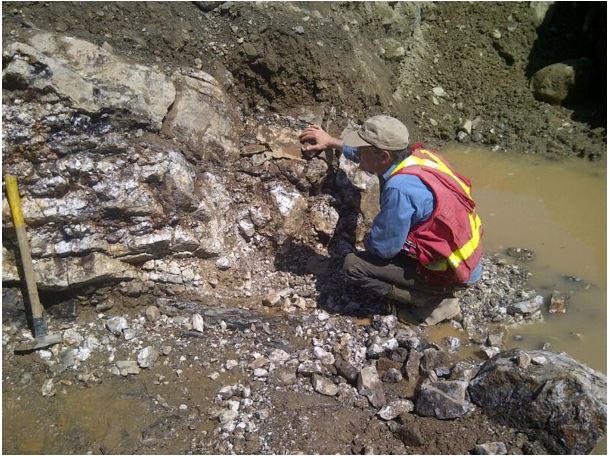 The northeast striking Jaclyn North Zone has been reportedly traced by diamond drilling (13 holes) for approximately 450 meters and locally to a vertical depth of 175 meters.  The zone is reported to contain 3 quartz veined sub-zones. Reported drill intersections include (core length):

Two trenches were excavated during the recent program at the Jaclyn South Zone testing the area east-northeast of historic diamond drill holes and trenches along the projected strike of the reported gold bearing veins. The Jaclyn South Zone is reported approximately 300 meters south of the Jaclyn Main Zone consists of two sub-parallel quartz veins, one of which is reported to have been traced approximately 200 metres along strike. Previous diamond drilling in this zone consisted of four holes.  The best reported drill hole intersection was in hole GP03-31 (44.59 g/t Au / 0.30 metre core length). The two trenches did not intersect bedrock.

All rock samples collected during the 2017 trenching program were submitted to Eastern Analytical (Springdale, Newfoundland) for preparation and analysis. Most samples (including quartz vein boulder and quartz vein channel samples) were analyzed for gold by Total Pulp Metallics – Fire Assay. Additional host rock samples (with plus or minus minor quartz veining) were analyzed by Fire Assay – AA.  The sample submission included gold standard and blank samples. 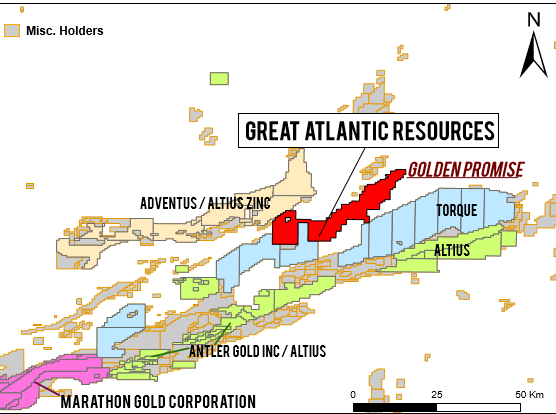 The 2008 NI 43-101 Technical Report states the style of veining, mineralization, alteration, host rock and tectonism at Golden Promise most closely resembles other turbidite-hosted (or slate belt) gold deposits throughout the world.

Access is excellent with a paved provincial highway transecting the property. The property is located near the town of Badger and approximately 50 kilometres northeast of the Valentine Lake Property of Marathon Gold Corp.

David Martin, P.Geo., a Qualified Person as defined by NI 43-101, is responsible for the technical information contained in this News Release.