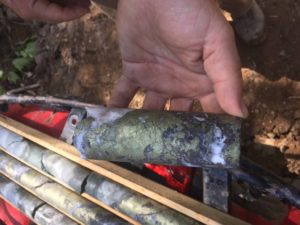 The results are from 13 holes completed in 2018 on the northwest region of the property, approximately 1.5 km northeast of the historic Keymet Mine, which operated in the mid-1950s, producing copper, lead, zinc and silver. Production at this mine was terminated due to a fire at the site.

Investors reacted by sending Great Atlantic shares up 36.36% or $0.02 to 7.5 cents on volume of over 3.0 million, making Great Atlantic the volume leader Friday on the TSX Venture Exchange. The stock is trading in a 52-week range of 15 cents and 4.5 cents.

The company’s focus since acquiring the Keymet property has been the northwest region of the property in the area of reported polymetallic veins. Most of the work has been conducted in the area of the Elmtree 12 copper-lead-zinc-silver bearing vein system.

Citing information obtained from the New Brunswick Dept. of Energy and Resource Development Mineral Occurrence database, Great Atlantic said at least seven vein occurrences with lead, zinc and +/- copper, silver, and gold have been reported in this region of the property in addition to polymetallic veins reported at the historic Keymet Mine.

Great Atlantic said the 2018 drilling program (13 holes or 1,484 metres) tested the Elmtree 12 vein system as in-fill drilling and along strike, with some holes testing deeper than previous drilling.

Earlier drilling intersected zinc, copper, lead and silver-bearing polymetallic veins. Two holes (Ky-18-19 and Ky-18-20) tested the continuation of another base metal and silver-bearing vein southwest of the Elmtree 12 vein system. It was discovered in 2017.