The global energy transition will be bumpy to say the least with the Russia/Ukraine war adding additional roadblocks as well as incentives.

Electric vehicles (EVs) are a key facet of the transition, and the disruptions to key minerals supply could slash EV production targets and keep more internal combustion engines (ICE) on the road, thus propping up crude oil demand and prices for longer.

The spike in crude oil prices in the wake of the Russia/Ukraine war is slamming petrochemicals and plastics margins in Europe and Asia in particular, as these producers rely on crude-based naphtha feedstock. If oil prices stay higher for longer, this would exacerbate their structural disadvantage versus US and Middle East producers which predominantly use natural gas liquids (NGLs) feedstock.

A slower EV transition also has implications for chemicals companies developing battery materials as well as specialty polymers and adhesives for EVs.

The big issue is nickel and cobalt, critical components in EV batteries. Russia’s Norilsk Nickel (Nornickel) is the world’s largest producer of nickel with 236,000 tonnes/year of capacity, according to Visual Capitalist’s Elements newsletter.

On 8 March, the London Metal Exchange halted trading in nickel as prices doubled to over $100,000/tonne on Russia supply fears as well as a reported short squeeze.

Cobalt, much of which is produced as a byproduct in nickel refining, may be a bigger issue than nickel itself, according to a chemical company senior executive familiar with the situation.

Most nickel is used in stainless steel, so if there’s a major shortage, the material would go to the higher value EV battery side at the expense of lower value stainless steel production, the executive noted.

BASF’s CAM project in Schwarzheide, Germany broke ground in November 2020 and is slated for start-up in 2022. It would be able to supply around 400,000 EVs/year, according to the company. It would use precursor CAM (PCAM) materials from BASF’s plant in Harjavalta, Finland under construction and also scheduled to start up in 2022.

The Harjavalta, Finland facility is being built next to Russia-based Nornickel’s nickel and cobalt refinery at the same location, and the companies in 2018 signed a long-term supply agreement for nickel and cobalt feedstocks from the refinery.

“This also applies for Nornickel where we do have existing contracts that are fulfilled in line with applicable laws, regulations and international rules. Currently there is no impact on supplies from Nornickel’s refinery in Finland,” said the spokesperson, who also added that BASF will evaluate these decisions and other matters related to the evolving situation on an ongoing basis.

If nickel and cobalt supply from Russia is disrupted and prices become prohibitively expensive, this will threaten global automakers’ aggressive EV production targets.

US-based Ford is targeting over 2m EVs in 2026, or about a third of its total global production. By 2030, it expects EVs to comprise half of production. US-based GM plans to completely phase out gasoline and diesel vehicles by 2035. Germany-based Volkswagen sees EVs making up half of sales by 2030, and zeroemission vehicles comprising almost the entire fleet by 2040.

Morgan Stanley’s auto analyst Adam Jonas said investors should cut their expectations for EV penetration in the coming years based on the nickel price surge, which could add about $1,000 to the cost of producing an EV.

UBS battery analyst Tim Bush raised his nickel/iron battery cost assumptions by 17-24% to reflect price increases, and estimates EV producers would have to raise prices by around 3% to offset inflation.

While nickel prices are rising on fears of Russia supply disruptions, the long-term impact may not be as severe if Russia can continue selling into China.

“Russia accounts for 17% of battery grade nickel output and at this stage we do not see issues with China continuing to buy from Russia,” said Bush in a research note.

“In the next few years we expect significant growth in battery grade nickel supply from Indonesia and could see rebalancing where China consumes more class 1 nickel from Russia and the West relies more on alternative sources,” he added. 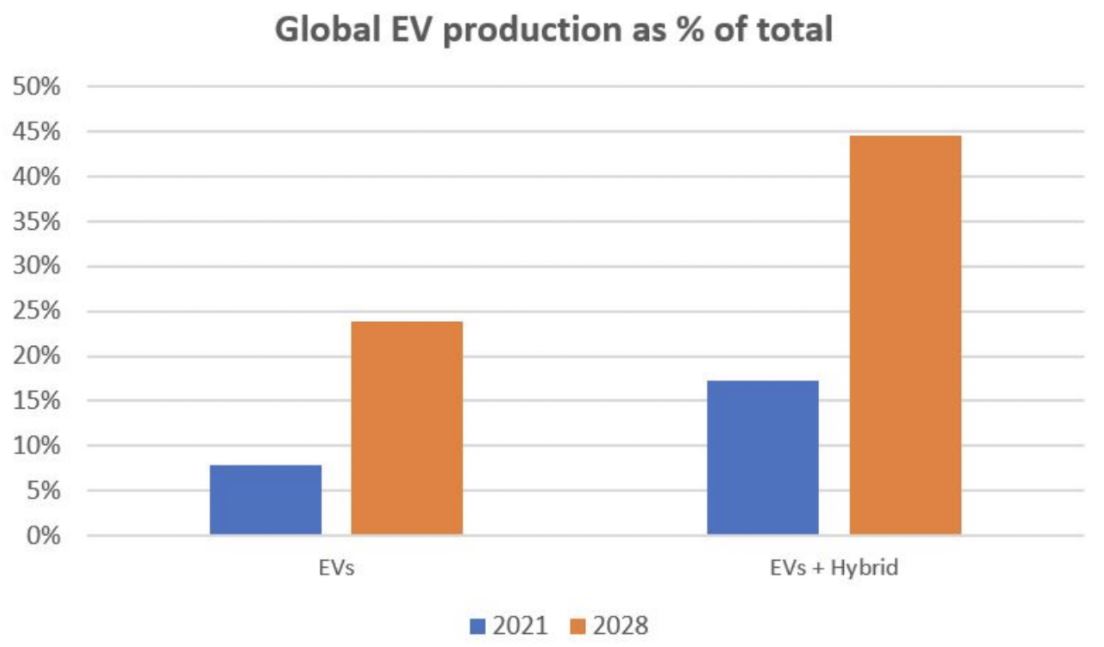 That would take a good chunk of oil demand out of the system, as auto transportation fuels drive about half of oil demand.

However, if this EV transition is delayed, a greater number of traditional internal combustion engine (ICE) vehicles on the road would keep transportation demand for oil elevated for longer.

For the automotive market overall, the Russia/Ukraine war stands to cause or exacerbate supply constraints in neon gas for semiconductor production, palladium for catalytic converters, aluminium and steel for auto bodies, and more immediately, wire harnesses which are the cable and wiring that makes all the electrical connections.

“The most imminent problem for the car producers is that the wire harness supply that is needed for European cars is currently on hold in Ukraine, and Ukraine makes up a significant part of European wire harness production,” said Patrick Hummel, European auto analyst at UBS, on a 9 March UBS podcast on the Russia/Ukraine impacts across sectors.

However, the good news is that since wire harnessing is a low capital intensity (and high labour intensive) business, supply chains can be reshuffled in several weeks or a couple months with other regions boosting production, he added

“But right now this is the biggest bottleneck for the European industry,” said Hummel.

Thus far, major automakers have not sounded the alarm on nickel, aluminium, palladium or other material supplies “but if anything were to happen on these fronts with supply slowing down significantly, we would see a global production impact”, the analyst pointed out.

The global automotive market has been undersupplied for the past 18 months, largely on semiconductor constraints. Worldwide car production of 75m units in 2021 was well below normal levels of about 90m, said the UBS analyst.

“So I’m not sure how much additional volume destruction we’re going to see from these current levels, even with a more bearish macro outlook,” said Hummel.

However, already one automaker is being directly impacted by sanctions.

Russia’s Lada, whose parent company AvtoVAZ is owned by France-based Renault Group, has shut down production on lack of parts and supplies because of international sanctions, reported the Wall Street Journal on 9 March.