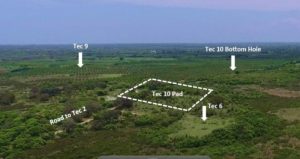 “Having EDC as a financial partner is an important step in the ongoing growth of IFR and we look forward to building on this strategic relationship,” said Steve Hanson, IFR’s President and CEO.  “IFR is honored to be the first Canadian oil and gas exploration and production company to be backed by EDC in Mexico.”

Mexico denationalized its oil and gas sector in 2014.

“IFR’s early success in Mexico provides a great example of the world-class expertise that Canada’s junior oil and gas companies have to offer in emerging markets,” said Mark Senn, regional Vice-President, Western region, EDC. “With the energy reforms taking place in Mexico right now, we believe there are tremendous opportunities to be had in that sector, and IFR has just proven that Canadian companies have what it takes to compete and win in the market.”

On Aug. 25, 2016 Tonalli met all the terms and conditions and signed a licence contract with the Mexico Comision Nacional de Hidrocarburos (CNH) for the onshore oil and gas development block 24 (Tecolutla), granting Tonalli the right to develop and produce hydrocarbons. Tonalli is a Mexican company with the share ownership split equally between IFR and Mexican petrochemical leader Grupo Idesa.

The Tecolutla block was awarded to Tonalli as part of the first round and third call of Mexico’s oil and natural gas “mature fields” bid round (Round 1.3), the first in almost 80 years. Each of the blocks offered in Round 1.3 attracted multiple bids.