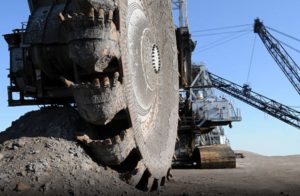 The differential between West Texas Intermediate (WTI) and the Canadian Crude Index (CCI), often referred to as Western Canadian Select, has recently hit discount levels that are at an all-time high.

Calgary-based price tracker Auspice Capital said the CCI has recently traded near US$20 per barrel, or 60% less than WTI, a discount greater than US$40 per barrel. That compares to the average of US$18 since 2010.

The reasons cited for the steep discount include growing production from the Alberta oilsands and a reduction in demand due to U.S. refinery maintenance slowdowns. Oil industry analysts and officials say the lack of available pipeline infrastructure is also a contributing factor.

“We haven’t built the infrastructure on a global scale to optimize the price,” said Auspice Capital founder Tim Pickering. “At the end of the day, we are giving away our resources too cheaply.”

The view is shared by major oil sands players, including Cenovus Energy Inc. [CVE-TSX, NYSE]. Cenovus said a shortage of pipeline capacity is contributing to a huge gap between the price of Canadian crude and the American benchmark.

In an email to the CBC, Cenovus said the magnitude of the price gap is causing significant losses for many producers,

“Our inability as a country to build critical new pipeline projects means we are now in a situation where we can’t get our growing oil production to market,” the company said.

During an Energy Round Table Conference in Calgary this week, Natural Resources Minister Amarjeet Sohi admitted that there have been setbacks for the Canadian oil and gas sector, notably the court’s overturning of the Trans Mountain pipeline expansion approval.

The proposed $7.4 billion Trans Mountain Pipeline expansion is a twinning of the existing 1,150-kilometre pipeline between Edmonton, Alberta and Burnaby, British Columbia. It is designed to open up alternative markets in Asia for Alberta bitumen.

However, pipeline construction was recently stalled when a Federal Court of Appeal quashed the approval of the project on the basis that Canada’s efforts to meaningfully consult with indigenous people fell short.

When the ruling was announced, the court also criticized the lack of attention given to how increased tanker traffic of about one ship per day off the cost of British Columbia would affect the resident killer whale population.

Sohi said he feels frustrated that no new oil pipelines have been built to take Alberta resources to markets other than the U.S.

“The amount of revenue we are losing as a country because we don’t have access to non-U.S. markets is absolutely unacceptable and we need to do better and we are committed to do better,” he said.

Earlier this month, the oil patch was hit with another setback when a U.S. Federal Judge rescinded the Presidential Permit of TransCanada Corp.‘s [TRP-TSX] Keystone XL Pipeline.

On November 6, 2018 U.S. District Judge Brian Morris, issued the landmark ruling in favour of the Indigenous Environmental Network (IEN) and the North Coast Rivers Alliance (NCRA), and other groups in the litigation to stop the Keystone XL Pipeline.

TransCanada has said the Keystone XL is a pipeline that will safely deliver crude oil from Canada and the U.S. to refineries on the Gulf Coast.Â  The company said it represents a safe, reliable and environmentally sound way to transport the energy needed to fuel the daily lives of Americans.

However, in Judge Morris ruled that President Trump violated federal environment laws when his Administration claimed that the KXL Pipeline was consistent with the public interest. In his ruling, he also said the approval of the pipeline violated the U.S. National Environmental Policy Act and the Administrative Procedure Act.

In an interview, Pickering said Trans Mountain is probably one of the most important energy projects in Canadian history.Â  “Adding capacity to the Trans Mountain pipeline to get more energy to tidewater is an important issue [for the country],” he said.

The approach includes further consultations with Indigenous groups on issues that are important to them. Ottawa has also instructed the National Energy Board to review the Trans Mountain pipeline expansion to consider the project’s impact on the marine environment.