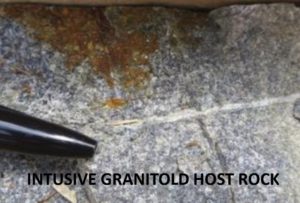 The 2017 drilling program included both infill and step out holes and has provided a better understanding of the nature of the gold mineralization discovered in 2014 trenching and the 2015 drill campaign.

Highlights of the 2017 work program:

Strike Extent – Mineralization is at least 125m in strike length, and remains open both east and west and at depth.

The analytical results from the 2017 drill program confirmed the presence of a shallow, well defined high-grade gold mineralized body starting at shallow depths, located within a broader halo of lower grade gold. The mineralization is hosted by a pervasive east-west trending structural zone within a reduced non-magnetic granite.  The widest high-grade gold zone is the Main Saddle Zone. This mineralized body is subvertical and approximately 10-30m wide, and has a known minimum strike extent of 125m.  Visible gold has now been identified in 3 of the 15 holes drilled in the Saddle Zone and therefore combined with the 2014 trenching indicates the presence of significant quantities of coarse gold.

In addition, two new higher grade zones have been identified; a new 1.5-4.5m wide high-grade zone (South Saddle Zone) parallel to the Main Saddle Zone 75m to the south and also a far less well defined zone 50m to the north (North Saddle Zone). Both the Main and South Saddle Zones remain open along strike and at depth. The mineralization intersected to date starts at shallow depths, is open to depth, with the deepest hole drilled to date terminated at 158.5m.

The 2017 soil sampling program was successful in identifying the surface expression of the 3 three main zones Saddle, North Ridge and Southwest Spur and is interpreted to outline some additional anomalous trends to the west.

The 1,232 metres of diamond core drilling in 11 holes confirmed the presence of a high- grade gold mineralization within a broad halo of low grade gold hosted east-west trending structures open in both directions along strike. A total of 181 new grid auger soil samples were collected over an area of 600 hectares. The samples were taken from the western side of the Property (West Marsh Area) and some infill sampling between the 2014 sample lines. The 2017 soil sampling results range from below detection limit to 68.2 ppb and confirm the exceptional contrast of the Saddle, North Ridge and Southwest Spur from background of below detection limit. The results have shown some unexplained low-level anomalies on the boundaries of the West Marsh Area. The soil sampling around the West Marsh area was incomplete during the current program due to weather conditions. This sampling program is anticipated to be completed in the third quarter of this year. In addition, infill soil samples in the North Ridge-Southwest Spur area will be collected to ensure a complete dataset ahead of defining drill targets for 2018. All soil samples to date have been collected over the unglaciated areas primarily above the 750m elevation level contour elevation.

Additional prospecting and mapping has been completed over the central part of the property close to the Saddle Zone with one area, North Face that warrants further follow up. Located about 1.2km south of the Saddle Zone, North Face is an intrusive of similar style to the Saddle Zone. The extent and nature of further investigation will partly depend on the analytical results from rock samples taken but the area has already been slated for trenching.

The work to date clearly demonstrates that the Wels discovery is significant. In addition to the Main Saddle Zone location, there are at least four targets, two of which are adjacent to Saddle, North Ridge and Southwest Spur and two that are less well developed, West Marsh Area, and North Face Intrusive.

Additional drilling is warranted along strike of the Main Saddle Zone to locate the boundaries of mineralization.

Stephen Swatton, CEO, stated, “We are excited to discover that we have additional multiple, shallow parallel high grade gold zones at the Saddle Zone Area. The discovery of the ‘South Saddle Zone’ and lesser defined North Saddle Zone increases the potential for the recognition of further additional high-grade zones. The strike potential of the Main Saddle Zone is still unknown as it is open in all directions and is an obvious drill target for a future campaign.”

The company is reviewing options for continuing work at Wels for the remainder of the 2017 field season. The Wels camp is serviced from a 3km long airstrip 24km west of Wels. Refer to company press release for more details.