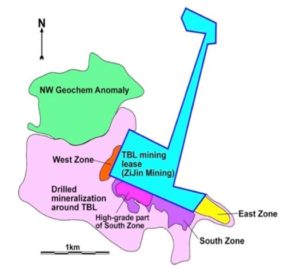 Kenadyr Mining (Holdings) Corp. [KEN-TSXV] reports that drilling at the South Zone of its Borubai licence in the Kyrgyz Republic has intersected widespread gold mineralization, including 40 metres at 6.17 g/t gold. The project is 100 road-km from Bishkek, capital of the Kyrgyz Republic. The property is also served with power.

Initial drilling was designed to intersect an area which was previously drilled by the Soviets between 1970 and 1990, and which intersected significant gold mineralization. The current drill hole provides support for the validity of the historical Soviet results and indicates that widespread gold mineralization may exist on Kenadyr’s licence directly adjacent to (within 100 metres of) the TBL Mine.

The South Zone is open in three directions and to depth, and there are strong indications that it connects to the TBL deposit. Core recovery is greater than 95%, and all intervals have been assayed using fire assay methods at an internationally accredited laboratory (ALS Global).

The hole has reached its target depth of 850 metres, and the remainder of the hole is being split by diamond saw and prepared for assay.

Partial assay results received to date are listed in the table below:

Readers are cautioned that the results from a single drill hole may not be representative of the mineralization on the Borubai project. Complete drill results will be announced once they become available.

Kenadyr is in a strong position having a robust balance sheet, no debt nor significant payments owing, and a supportive institutional shareholder base. The management team has extensive in-country operational experience and merger and acquisition expertise.

Dr. Alexander Becker, Kenadyr’s CEO, stated, “Partial results from our initial 2017 drill hole at Borubai have exceeded our expectations. Based on the geometry of the adjacent TBL orebody, it is the corporation’s interpretation that these intersections are close to true widths. Subject to obtaining additional drill results, the corporation believes that the mineralization encountered in our initial drill hole validates and supports the findings reported in historic drilling, and indicates that the mineralization being mined at the adjacent TBL mine may continue onto Kenadyr’s Borubai licence.”

Kenadyr’s Borubai project comprises a 100%-owned exploration licence covering a contiguous 164-square-kilometre land package that encircles the Zijin/Kyrgyz/Altyn newly constructed and operational TBL Mine in northern Kyrgyz Republic. Zijin, the majority owner of the TBL mine, is one of China’s largest gold producers, the second-largest copper and zinc producer, as well as a major producer of tungsten and iron ore. In 2015, Zijin’s sales revenue and net profit attributable to the parent company reached US $11.44-billion and US $255-million, respectively, ranking first and second, respectively, among 14 major global public gold miners (Source: Zijin’s website). According to a news release published by Zijin on Aug. 15, 2011, the national resources table of the Kyrgyz Republic stated that the TBL field contains (C1 plus C2) 8,906,100 tonnes of gold ore (the average grade is 7.23 grams per tonne), and the gold metal volume is 64,420.5 kilograms, among which the C1 grade (initial mining reserve) is 4,949,754 tonnes of gold ore (the average grade is 7.02 g/t) and the gold metal volume is 34,754.6 kilograms. The TBL Mine is designed to produce 125,000 ounces of gold/year. The TBL Mine deposit is directly adjacent to Kenadyr’s initial drill target, the South Zone, which was previously drilled by the Soviets, with drilling on the Bourubai licence exceeding 98,000 metres.