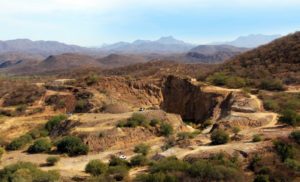 Kootenay Silver is a Canadian and Mexico-based silver company. It is focused on developing two major silver projects in Mexico, including the La Cigarra Silver Project in Chihuahua and the Promontorio and La Negra silver discovery in Sonora.

The La Negra discovery was made in the fall of 2014 and is one of several new prospects recently identified within a 25 by 15-km mineralized corridor referred to as the Promontorio mineral belt. La Negra has been compared to Pan American’s Alamo Dorado Mine, which is located 190 km to the south. Like Alamo Dorado, La Negra is thought to be amenable to a low strip, open pit mining situation.

Results released on Monday are the final 10 holes from a 2017 drill campaign. Highlights include 1,161 grams per tonne silver over 5.15 metres.

Kootenay CEO James McDonald said he is pleased with the excellent grades and continuity encountered in the La Negra mineralized breccia. “We are looking forward to the 2018 exploration program which is entering the third year of our agreement with Pan American Silver and will focus on testing additional targets,” he said.

It is anticipated that the 2018 program conducted by Pan American Silver will focus on developing drill targets outside the La Negra discovery. Drilling is currently under way on one such target area a few kilometres north of La Negra. Additional mapping and sampling area required on other target areas prior to drilling.