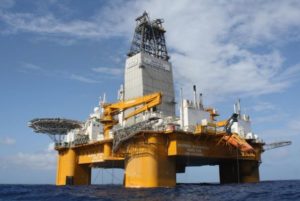 The company said the discovery is on the Brulpadda prospects, which are located on Block 11B/12B in the Outeniqua Basin, 175 km off the southern coast of South Africa. The block covers an area of 19,000 km2 with water depths ranging from 200 to 1,800 metres.

A Financial Times report said the Brulpadda prospect find is a boost for South Africa, which has long been reliant on oil imports to meet its domestic needs.

Africa Energy is a member of the Lundin Group of companies. Adam Lundin, son of resource financier Lukas Lundin, is a company director. Holding exploration assets in South Africa and Namibia, the company is focused on high-impact exploration in Africa and may look to acquire producing assets to fund its ongoing exploration program.

French multinational Total SA is the project operator. Its first attempt to drill the Brulpadda Prospect in 2014 was suspended prior to reaching the target due to difficulties experienced by the drilling rig in the harsh deep water environment.

After an extensive review of the challenging surface conditions, Total contracted the Odfjell Deepsea Stavanger semi-submersible rig to drill the Brulpadda-1AX re-entry well in December, 2018.

The Brulpadda well was drilled in approximately 1,400 metres of water. The well targeted two objectives in a deep marine fan sandstone system within combined stratigraphic/structural closure. Following the success of the main objective, the well was deepened to a final depth of 3,633 metres and was successful in the Brulpadda-deep prospect.

The well encountered a total of 57 metres of net gas condensate pay over two Lower Cretaceous high-quality reservoirs. Core samples were taken in the upper reservoir, and a comprehensive logging and sampling program was performed over both reservoirs.

As a result, Africa Energy holds a 4.9% effective interest in the exploration right for Block 11B/12B.

In Thursday’s press release, Soden said the success at both the Brulpadda primary and secondary targets significantly de-risks four other similar prospects already identified on the existing 2D seismic.

The Block 11B/12B partners plan to acquire 3D seismic this year, followed by up to four exploration wells.

Recovery is a long way off for oil and gas industry, experts say

Recovery is a long way off for oil and gas industry, experts say