Mako Mining Corp. (TSX-V: MKO; OTCQX: MAKOF) (“Mako” or the “Company”) is pleased to report positive drill results from the San Pablo zone at the Las Conchitas-North (“LC-N”) area of its wholly-owned San Albino-Murra property. The LC-N area is located approximately 750 meters (“m”) south of the San Albino gold mine (“San Albino”) which is currently in commercial production.

Initial drilling in 2018 targeted a mineralized structure exposed in the historic San Pablo working where seven drill holes, totaling 260 m were drilled. No additional drilling had been completed in the area until this year, which has resulted in the discovery of two new veins, the Mina Francisco and the Tirado vein.

Highlights of the recent drilling

Akiba Leisman, CEO of Mako states, “the discovery of the Mina Francisco and Tirado veins are the first results back from our recently announced $17.2 million exploration program, which is being funded through cash flow from the San Albino mine 750 meters to the north. Mina Francisco has already been extended to 200 meters of strike and nearly 330 meters of dip, beginning from surface, open in all directions, with grades and thicknesses very similar to that of San Albino. These results have great potential to yield additional open-pittable mineral resources. Now that we have seven core rigs at site, further exploration results are expected to be delivered throughout the year, with the goal of making additional discoveries.”

To date, a total of 4,670 meters in the 2022 drilling campaign have been completed in 35 drill holes at Las Conchitas North resulting in the discovery of the Mina Francisco and Tirado veins as well as further delineation of the San Pablo vein (see attached drill plan and table below). The three mineralized structures are located at the northern portion of the Las Conchitas area in Nueva Segovia, Nicaragua which is interpreted to be the southwest portion of a new emerging orogenic gold camp with over 28 kilometers of relatively unexplored strike length.

Past drilling had returned good indications of San Pablo gold mineralization, but the recent drilling below the known mineralization represents a significant, new discovery of the Mina Francisco vein in the area.  An initial drill program consisting of 26 scouting exploration holes were designed to test a large geochemical soil anomaly (500m x 250m), targeting the portion of the zone where no previous drilling had been completed.

The discovery drill hole, LC22-515, collared below the known mineralization at San Pablo, intersected an interval of 12.72 g/t Au and 8.6 g/t Ag over 1.70 m (1.50 m ETW), starting at vertical depth of 151 m (see attached cross section). This hole confirmed the presence of the Mina Francisco vein in the area approximately 270 m down dip of a surface expression of the vein (historical Mina Francisco Tunnel), across a ravine previously interpreted to be a fault boundary.

An additional five separate mineralized intervals were intersected in hole LC22-524, approximately 233 m up-dip from the discovery hole, including thus far the highest gold values in the Mina Francisco vein of 51.80 g/t Au and 29.8 g/t of Ag over 0.90 m (ETW), starting at vertical depth of 47.2 m, and corroborating continuity along dip.

The current intersects of the TD vein vary in widths from 0.5 m to 3.3 m, and are considered to be an important part of a larger vein system, including the San Pablo and Mina Francisco veins, which have excellent potential for open pittable gold mineralization, very similar to San Albino.

The Company has completed nine condemnation drill holes totaling 1,402 m within the proposed waste dump area. Gold mineralization was intersected in three drill holes with the best results in hole CNB22-01 of 10.97 g/t of Au and 23.2 g/t of Ag over 3.50 m (3.30m ETW). The condemnation holes intersected the TD vein below open pit depths and do not affect the location of the proposed waste dump; however, they indicate the potential for mineralization that could be accessed from underground.

In 2022, the Company intends to complete environmental, metallurgical and engineering studies, and to initiate the mine permitting process for Las Conchitas. A maiden resource estimate for the entire Las Conchitas area is planned for Q4 2022 – Q1 2023. 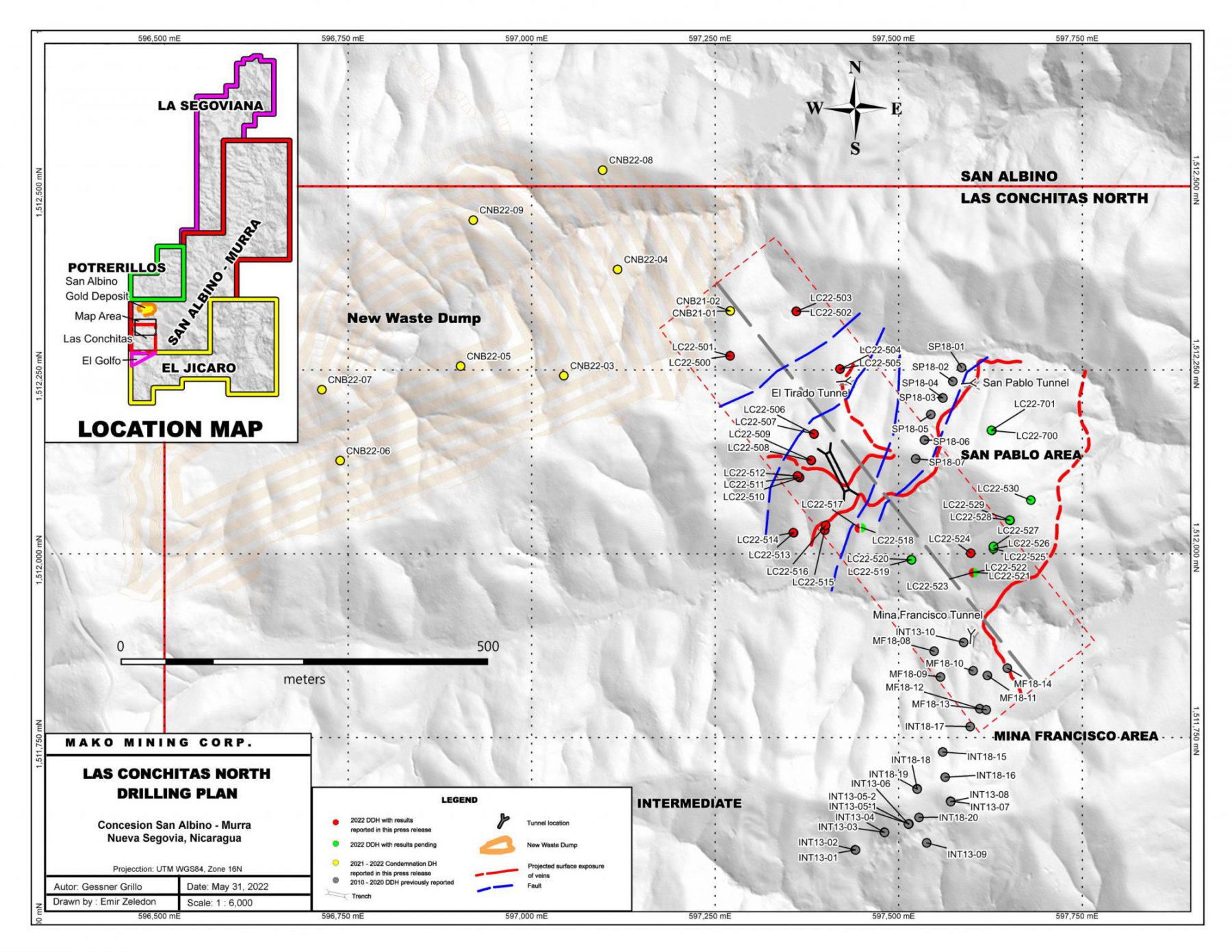 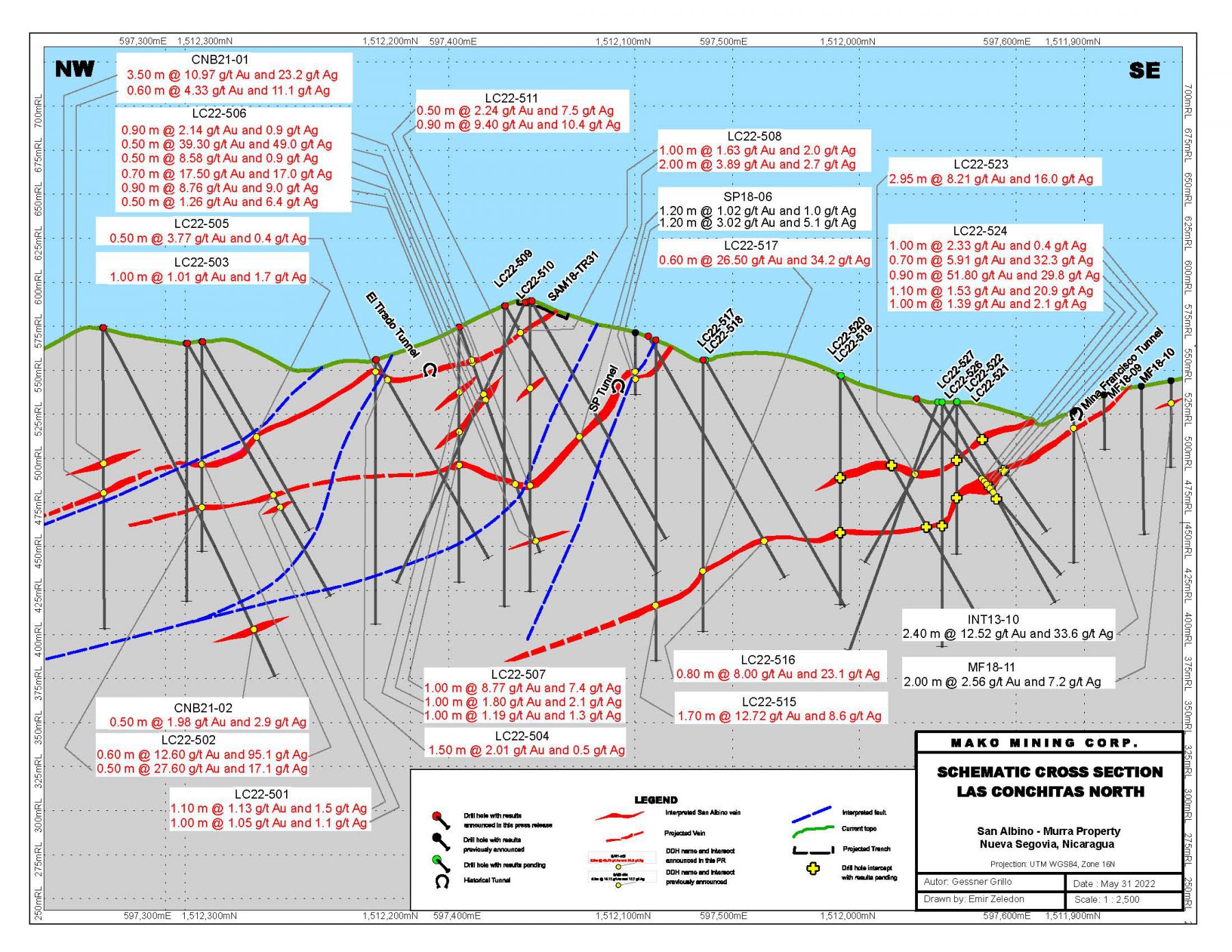 Drill core was continuously sampled from inception to termination of the entire drill hole. Sample intervals were typically one meter with a minimum sample width of 50 cm. Drill core diameter was HQ (6.35 centimeters). Geologic and geotechnical data was captured into a digital database, core was photographed, then one-half split of the core was collected for analysis and one-half was retained in the core library.

Samples were kept in a secured logging and storage facility until such time that they were delivered to the Managua facilities of Bureau Veritas and pulps were sent to the Bureau Veritas laboratory in Vancouver for analysis. Gold was analyzed by standard fire assay fusion, 30-gram aliquot, AAS finish. Samples returning over 10.0 g/t gold are analyzed utilizing standard Fire Assay-Gravimetric method. The Company follows industry standards in its QA&QC procedures. Control samples consisting of duplicates, standards, and blanks were inserted into the sample stream at a ratio of 1 control sample per every 10 samples. Analytical results of control samples confirmed reliability of the assay data.  No top cut has been applied to the reported assay results.

John M. Kowalchuk, P.Geo, a geologist and qualified person (as defined under NI 43-101) has read and approved the technical information contained in this press release. Mr. Kowalchuk is a senior geologist and a consultant to the Company.

On behalf of the Board,

Mako Mining Corp. is a publicly listed gold mining, development and exploration company. The Company operates the high-grade San Albino gold mine in Nueva Segovia, Nicaragua, which ranks as one of the highest-grade open pit gold mines globally. Mako’s primary objective is to operate San Albino profitably and fund exploration of prospective targets on its district-scale land package.

Statements contained herein that are not historical fact are considered “forward-looking information” within the meaning of applicable securities laws. Forward-looking information is based on management’s current  expectations, beliefs and assumptions, and includes: the objective of the LC-N drilling campaign noted herein, including the potential to yield additional open-pittable mineral resources and the goal of making additional discoveries; that the northern portion of the Las Conchitas area in Nueva Segovia, Nicaragua, is interpreted to be the southwest portion of a new emerging orogenic gold camp with over 28 kilometers of relatively unexplored strike length;  that in 2022, the Company intends to complete environmental, metallurgical and engineering studies, and to initiate the mine permitting process for Las Conchitas; that a maiden resource estimate for the entire Las Conchitas area is planned for Q4 2022 – Q1 2023; results of drilling to-date will confirm the Company’s expectations and that addition drilling to confirm continuity will be carried out in the future; and that the Company meets its object of operating San Albino profitably while continuing to fund exploration of prospective targets.  Such forward-looking information is subject to a variety of risks and uncertainties which could cause actual events or results to differ materially from those reflected in the forward-looking information, including, without limitation, the risks that additional satisfactory exploration results will not be obtained; the risk that the Company will not delineate a maiden resource at the Las Conchitas area later this year or ever; that exploration results will not translate into the discovery of an economically viable deposit; risks and uncertainties relating to political risks involving the Company’s exploration and development of mineral properties interests; the inherent uncertainty of cost estimates and the potential for unexpected costs and expense; commodity price fluctuations, the inability or failure to obtain adequate financing on a timely basis and other risks and uncertainties disclosed in the Company’s public filings at www.sedar.com. Forward-looking information contained herein is based on management’s best judgment as of the date hereof, based on information currently available and is included for the purposes of providing investors with the Company’s plans and expectations at the Las Conchitas area, and may not be appropriate for other purposes.