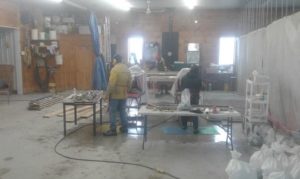 Manganese X Energy Corp.Â [MN-TSXV] wants to be a supplier of secure, ethically sourced manganese from its Battery Hill deposit, which is located near Woodstock, New Brunswick.

Its aim is to produce a high purity (plus 99.9%) battery grade manganese product for the production of lithium ion batteries in the growing electric vehicle, energy storage and steel sectors.

It is why the company’s CEO Martin Kepman has said he is pleased that Manganese X, in collaboration with Kemetco Research Inc., has been able to produce manganese sulfate with a purity exceeding 99.6% and with very low levels of base and alkali metals.

Manganese X and KemetcoÂ  are moving forward with the purification process and are currently outlining the next phase of the project aimed at producing high purity (plus 99.9%) battery grade manganese compounds for use in different types of battery chemistries, including Lithium-ion and alkaline.

Why manganese?Â  Manganese is among the most widely used metals in the world, fourth after iron, aluminum and copper. Yet there are currently no producing manganese mines in North America.

As electrolytic manganese (EMM) production outside China is minimal, Manganese X has an opportunity to become one of the few Western players in the EMM sector, said Christopher Ecclestone of Hallgarten & Company in a research report.

Ecclestone said lithium ion manganese batteries are a promising technology as their manganese-oxide components are earth-abundant, inexpensive, non-toxic and provide better thermal stability. Historically, the demand, and hence the price of the metal is closely tied to demand for iron ore in China.

Because manganese sells for US$0.85 a pound, the company says using manganese can significantly bring down the manufacturing cost of lithium ion batteries, a major factor in the high cost of electric vehicles. Cobalt, by comparison, is selling for US$16.10 a pound.

Manganese X is aiming to produce battery-grade manganese from ore extracted from its Battery Hill project, which spans 1,228 hectares in Carleton County. The property covers a significant portion of the known historic manganese-bearing horizons in an area approximately 6.3 kilometres northwest of Woodstock, southwestern New Brunswick.

Bryan Way, in his Master’s Thesis on the Woodstock area manganese occurrences, reports that the area hosts of series of banded iron formations that collectively constitute one of the largest manganese resources in North America. The resource is estimated to be 194 million tonnes.

Exploration in the region dates back to 1836, when an iron-manganese deposit was discovered in the Woodstock area and then mined for almost 40 years, starting in 1848. According to a technical report, 70,000 tons, primarily from a mineralized zone named Iron Hill, was mined. This material was reported to have been sent to the U.K. for use in armour plating Royal Navy gun-boats due to its exceptional quality.

Three of the main historic manganese occurrences, plus at least two additional showings are located on claims located in an area known as license 5816.

Approximately two kilometres north of the Iron Ore Hill occurrence, the Maple Hill showing is reported to have grades of 13.9% iron and 6.97% manganese.

Highlights from drilling on the Shape Farm and Moody Hill areas of the deposit include 17.37% MnO over 23.6 metres within a broader zone assaying 13.9% Mn0 over 44.6 metres.

Manganese X said it is planning a fall drill program at Battery Hill to complete a NI-43-101 resource estimate with the intention of upgrading its existing classification of mineralization to the indicated resource status. The program will focus on near surface, higher grade areas of the deposit such as the Moody Hill sector.

Meanwhile, the company said it is proceeding with a non-brokered private placement financing to raise $360,000. The placement will consist of 3.0 million units priced at 12 cents per unit. Each unit is comprised of one common share and one common share purchase warrant, each of which will entitle the holder to acquire one warrant share at 14 cents for a period of three years after the closing date.

In a recent news release, the company said it raised $338,030 from a warrant incentive program.