The drilling intersected broad zones of near-surface green copper oxide mineralization in all holes. As with the first infill results (see release from March 28, 2022), these holes confirmed the mineralized zones as interpreted in the existing Mineral Resource Estimate (MRE) (released December 2019) area for the MOD, but with several zones encountering higher grades than expected. Furthermore, several intercepts were extensional, falling outside the 2019 MRE block model, with positive implications for future resource updates. There is also evidence of extensions to the recently discovered MAMIX zone (see press release dated October 13, 2021).

A video summarizing today’s results is available for viewing.

“These ten drill holes from our infill campaign have continued to highlight the excellent continuity of mineralization at the MOD. We intersected the expected mineralization in all holes. Of note were several areas with grades exceeding those expected in the MRE models, which we anticipate will positively impact our future resource estimations.

“The results of LAR-87, drilled in an area interpreted and modelled as a thinner zone of lower grade, peripheral mineralization, are especially positive and point to potential for further resource growth in this area. The intersection of a relatively continuous column of 288 metres significantly extends the overall mineralized envelope on the south-western edge of the deposit. Of particular interest were the zones of higher-grade material at the bottom of the drill hole, which significantly exceeded the expected grades for this area. These results point to a potential extension of the high grade MAMIX zone discovery, made in 2021.

“We are awaiting the first drill holes from the MAMIX infill program, which is focused on stepping out from the original discovery and should be available imminently. Drilling has been delayed due to the previously announced operational issues with our drilling partners. We have contracted additional rigs to make up the lost time and hope to have completed the program in early July.”

The initial results of the infill program (see press release dated March 28, 2022) extended the known mineralized envelope, especially along the southern margin of the deposit and encountered grades above those interpreted in previous MREs. This is expected to positively impact the MRE update in the second half of 2022.

The current results have confirmed the geological and resource modelling, with mineralization encountered in the expected areas. Once again, there have been positive surprises. Several zones encountered grades exceeding expectations in the MRE models and interpretation, with zones extending well beyond the previously interpreted mineralized envelope. 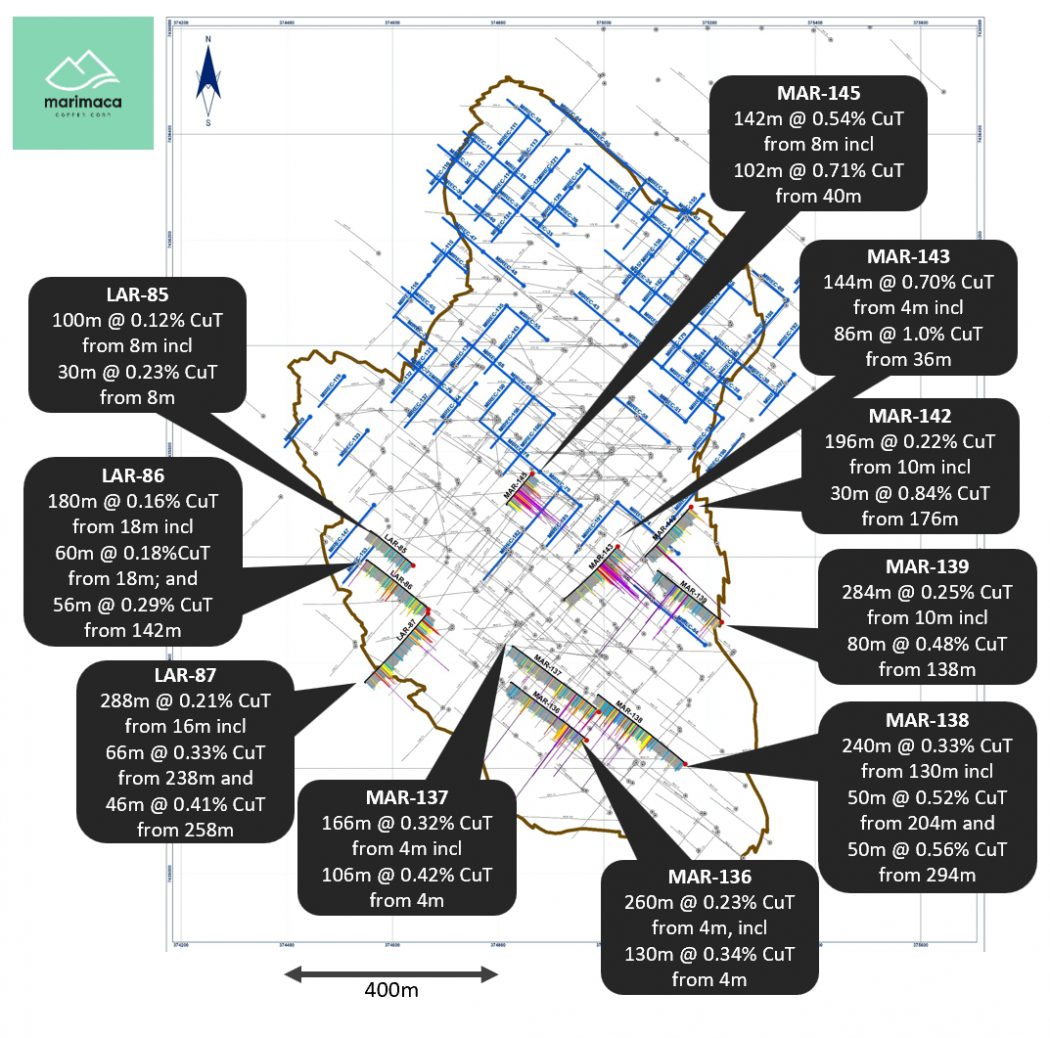 Drill holes LAR-85, LAR-86 and LAR-87 are located on the south-western limit of the MRE which was previously interpreted to be of lower grade and with limited opportunities for resource expansion. LAR-87, which intersected a broad zone of mineralization from surface, is particularly interesting. Based on the MRE interpretation, it is expected that this intercept will provide a good basis for further resource growth towards the south-west, outside of the current MRE area limits. Additionally, the higher-grade zones encountered at the bottom of the drill hole are interpreted as a northern extension of the previously discovered MAMIX zone. 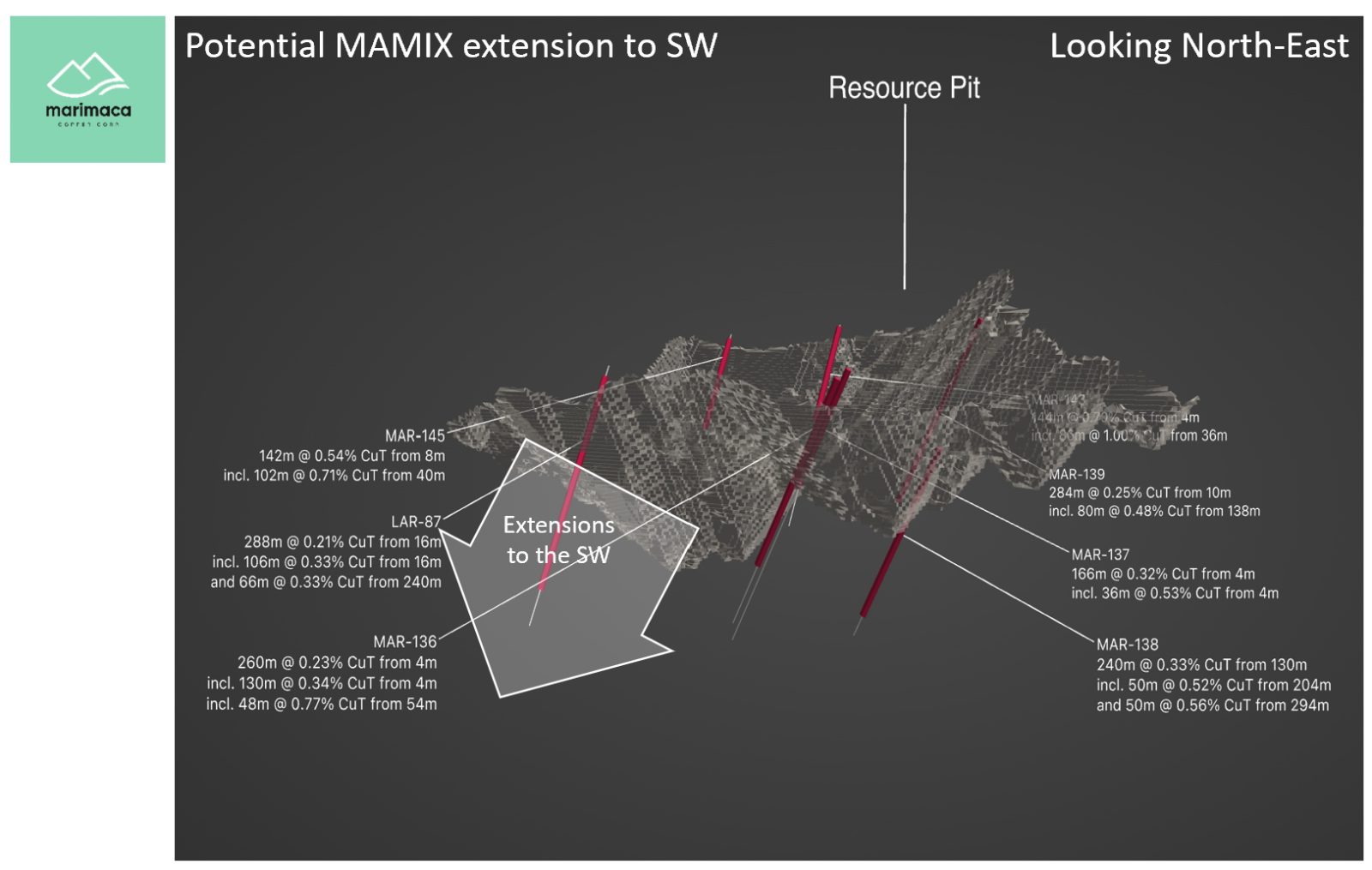 Holes MAR-139, MAR-142, MAR-143 and MAR-145 are located at the central to eastern limit of the deposit. Once again, results confirm mineralization expected from the MRE interpretation and PEA block model. MAR-142 and MAR-139 are located towards the edge of the deposit in an area interpreted to be lower grade. Results confirm broad low-grade oxide from surface but with several higher grade zones which exceeded those expected from the block model. MAR-142 intercepted 30m of mixed mineralization at @ 0.84% CuT from 176m, MAR-139 with 28m @ 0.61% CuT from 138m and 34m @ 0.57% CuT from 184m.

Holes MAR-143 and MAR-145 are located in the higher-grade core of the project, representing the first five years of the PEA mine plan and as expected, intersected broad, continuous zones of mineralization from surface, with strong grades. MAR-143 intercepted 144m @ 0.7% CuT and MAR-145 intercepted 142m @ 0.54% CuT. 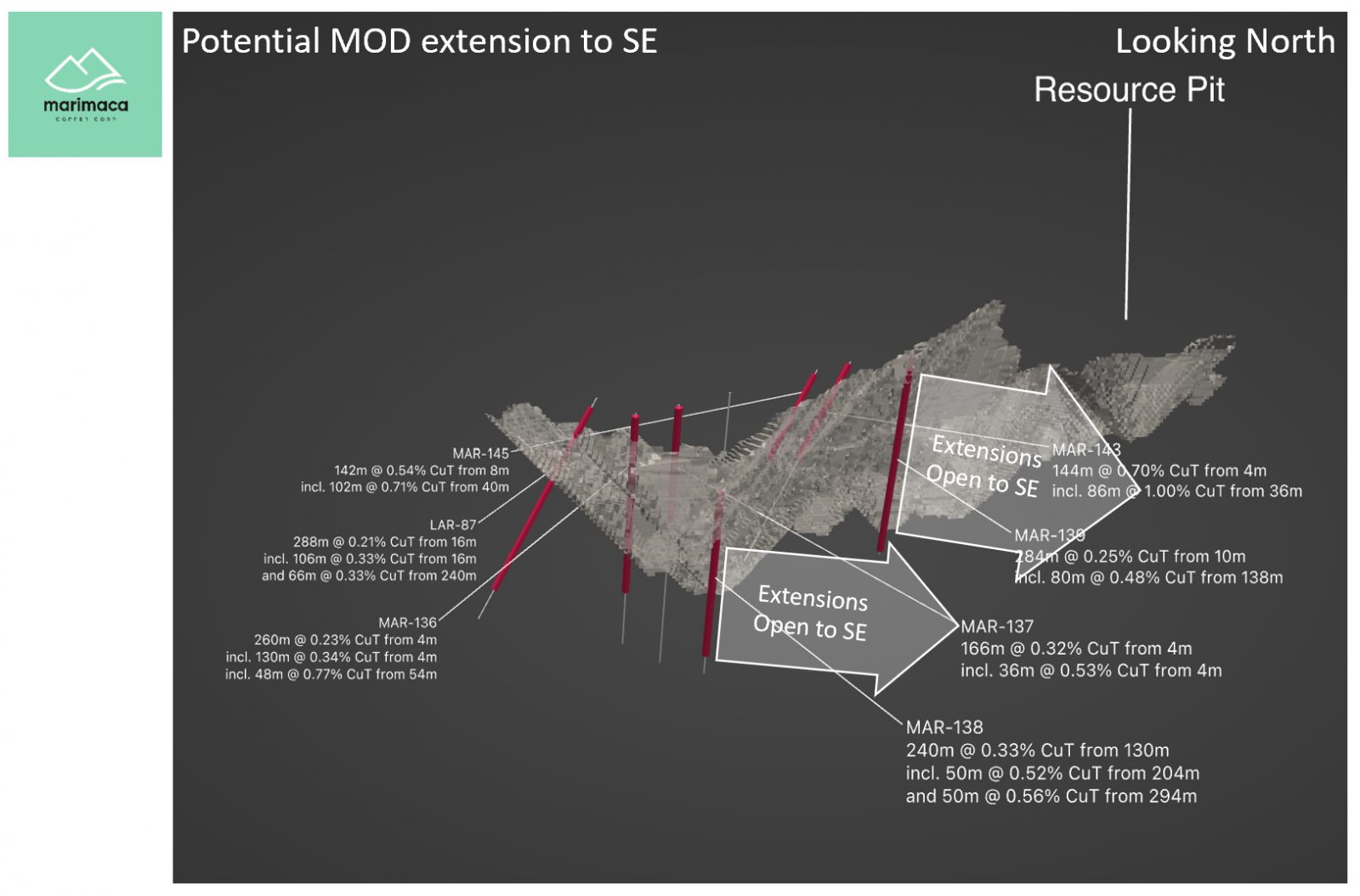 The updated Mineral Resource Estimate (“MRE”) is planned for early Q3 2022, immediately following the completion of the current drilling program.

True widths cannot be determined with the information available at this time. RC holes were sampled on a 2m continuous basis, with dry samples riffle split on site and one quarter sent to the Andes Analytical Assay preparation laboratory in Calama and the pulps then sent to the same company laboratory in Santiago for assaying. A second quarter was stored on site for reference. Samples were prepared using the following standard protocol: drying; crushing to better than 85% passing -10#; homogenizing; splitting; pulverizing a 500-700g subsample to 95% passing -150#; and a 125g split of this sent for assaying. All samples were assayed for %CuT (total copper) and %CuS (acid soluble copper) by AAS. A full QA/QC program, involving insertion of appropriate blanks, standards and duplicates was employed with acceptable results. Pulps and sample rejects are stored by Marimaca Copper for future reference.

The technical information in this news release, including the information that relates to geology, drilling and mineralization was prepared under the supervision of, or has been reviewed by Sergio Rivera, Vice President of Exploration, Marimaca Copper Corp, a geologist with more than 36 years of experience and a member of the Colegio de Geologos de Chile and of the Institute of Mining Engineers of Chile, and who is the Qualified Person for the purposes of NI 43-101 responsible for the design and execution of the drilling program.

The QP confirms he has visited the project area, has reviewed relevant project information, is responsible for the information contained in this news release, and consents to its publication.

This news release includes certain “forward-looking statements” under applicable Canadian securities legislation. There can be no assurance that such statements will prove to be accurate, and actual results and future events could differ materially from those anticipated in such statements. Forward-looking statements reflect the beliefs, opinions and projections on the date the statements are made and are based upon a number of assumptions and estimates that, while considered reasonable by Marimaca Copper, are inherently subject to significant business, economic, competitive, political and social uncertainties and contingencies. Many factors, both known and unknown, could cause actual results, performance or achievements to be materially different from the results, performance or achievements that are or may be expressed or implied by such forward-looking statements and the parties have made assumptions and estimates based on or related to many of these factors. Such factors include, without limitation: risks related to share price and market conditions, the inherent risks involved in the mining, exploration and development of mineral properties, the uncertainties involved in interpreting drilling results and other geological data, fluctuating metal prices, the possibility of project delays or cost overruns or unanticipated excessive operating costs and expenses, uncertainties related to the necessity of financing, the availability of and costs of financing needed in the future as well as those factors disclosed in the annual information form of the Company dated March 29, 2022, the final short form base prospectus and other filings made by the Company with the Canadian securities regulatory authorities (which may be viewed at www.sedar.com). Accordingly, readers should not place undue reliance on forward-looking statements. Marimaca Copper undertakes no obligation to update publicly or otherwise revise any forward-looking statements contained herein whether as a result of new information or future events or otherwise, except as may be required by law.

Neither the Toronto Stock Exchange nor the Investment Industry Regulatory Organization of Canada accepts responsibility for the adequacy or accuracy of this release.