it has entered into an option agreement to acquire two large claim groups the (“KLR” and “Walker”) from an arm’s length party. This positions Marvel in a highly advantageous position along the Key Lake fault adjoining both Cameco and Fission’s property boundaries. The two claim groups collectively cover 14,190 hectares along the East, North and Northwestern directions.

The project lies within the Wollaston-Mudjactic Transition Zone (“WMTZ”) of the eastern Athabasca Basin which is host to the highest-grade uranium mines in the world including:

The KLR, first claim group consists of 3,595 hectares (ha) and is contiguous to the former producing Key Lake Uranium Mine. The Key Lake Deposit consisted of two mineralized zones which historically produced a total of 4.2 million tonnes of product at an average grade of 2.1% U3O8 (Harvey, 1999). The Key Lake Property is now host to the Key Lake Mill, owned, and operated by Cameco which processes ore from the McArthur River uranium deposit.

The Walker Property, second claim group covers an area of 10,595 ha and is contiguous to Fission 3.0 Hobo Lake uranium properties. Hosted within WMTZ, the Walker Property lies along the Key Lake Shear Zone and hosts 10 uranium showings and multiple unexplored EM targets. Both properties are easily accessible by highway. Exploration to date on the Properties has been limited.

These 2 claims groups are in addition to Marvel’s recent acquisition of the Highway North Project and are directly tied on to the North and South property boundaries within the same WMTZ corridor which covers an area of 2,573 ha (See Press Release Feb 28, 2022) Marvel now has a controlling interest in the camp totaling 16,763 ha. 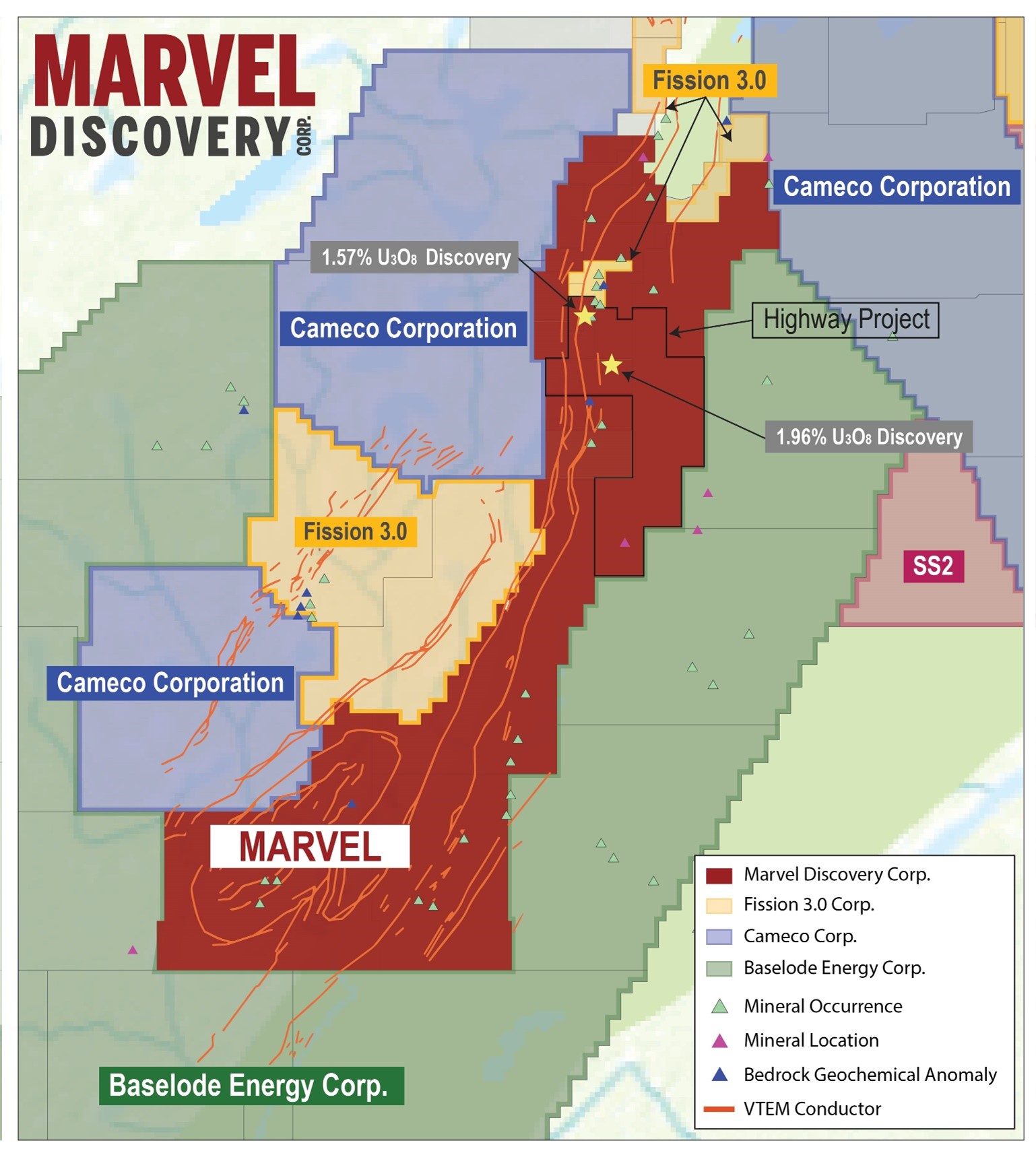 “We are extremely fortunate to have acquired the KLR and Walker claim groups being directly tied on to the north and south of our recently acquired Highway North Project. This brings our new total to over 16,000 hectares along a trend that hosts some of the highest-grade uranium mines in the world. Being next door to the former Key Lake Uranium Mine and Cameco’s Key Lake Mill is highly strategic move as we advanced the project.Â  This corridor along the Key Lake Shear Zone represents tremendous opportunity in mimicking the success of basement-hosted uranium deposits found on the western side of the Athabasca Basin like NexGen Energy’s Arrow Deposit.” Mr. Karim Rayani, President & Chief Executive Officer Commented.

In Saskatchewan, uranium deposits have been discovered at, above, and up to 300m below, the Athabasca Group unconformity within basement rocks. Mineralization can occur hundreds of meters into the basement or can be up to 100m above, in Athabasca Group sandstone. Typically, uranium is present as uraninite/pitchblende that occurs as veins and semi-massive to massive replacement bodies. Mineralization is also spatially associated with steeply-dipping, graphitic basement structures and may have been remobilized during successive structural reactivation events. Such structures can be important fluid pathways as well as structural or chemical traps for mineralization as reactivation events have likely introduced further uranium into mineralized zones and provided a means for remobilization (Jefferson, et al. 2007) (Figure 2). 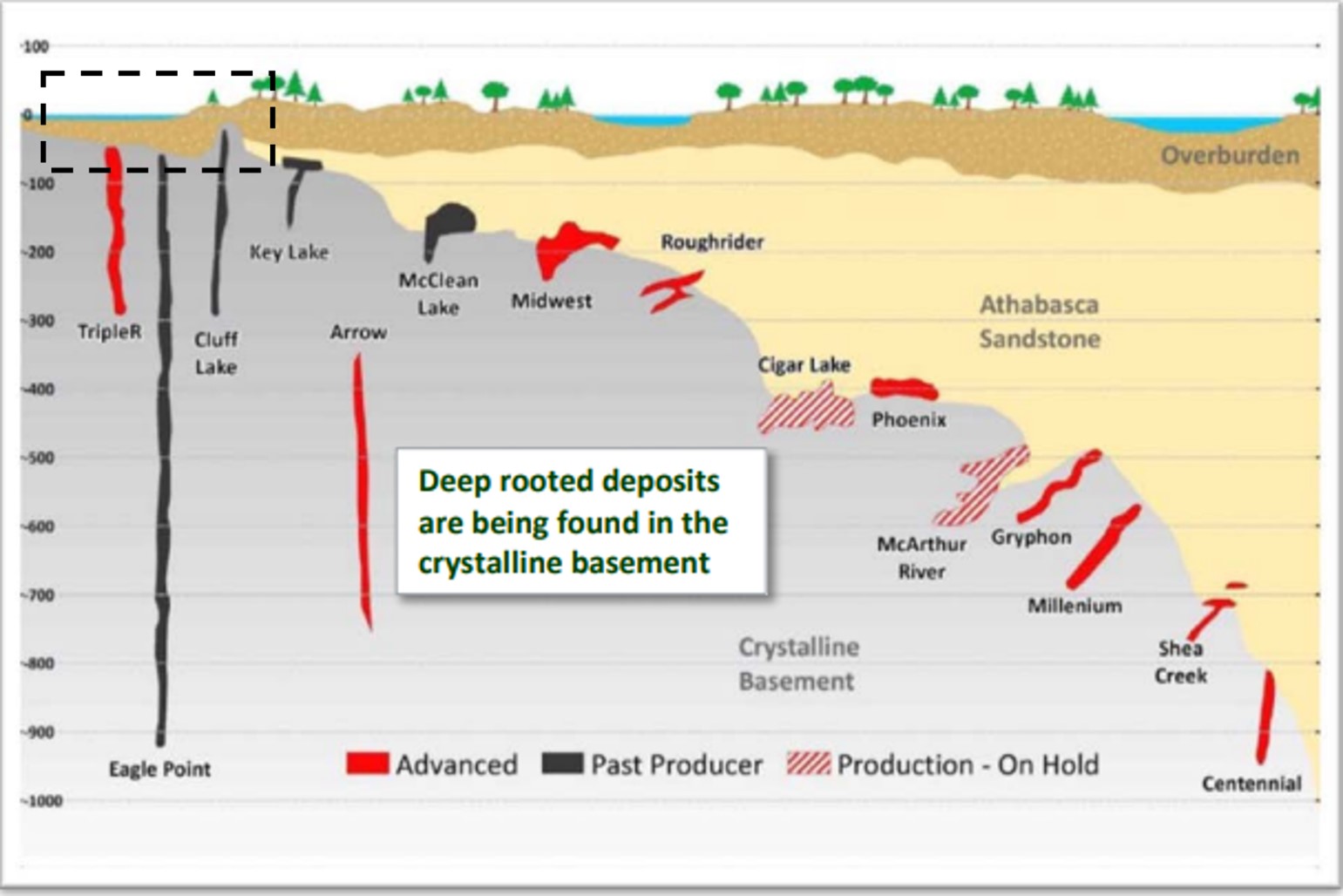 Both Properties straddle the Key Lake Fault Zone, an important corridor for structurally controlled Athabasca Basin type uranium deposits. The Arrow Deposit, owned by NexGen Energy lies along a similar structural corridor as the Marvel properties. The Arrow Deposit1, which has undergone a Positive Feasibility Study with robust economics contains Probable Reserves of 239.6 million lbs of U3O8 at an average of 2.37% U3O8 and Measured and Indicated Resources of 256.7 million lbs at an average grade of 3.1% U3O8. The Arrow Deposit is the largest undeveloped uranium deposit in Canada. 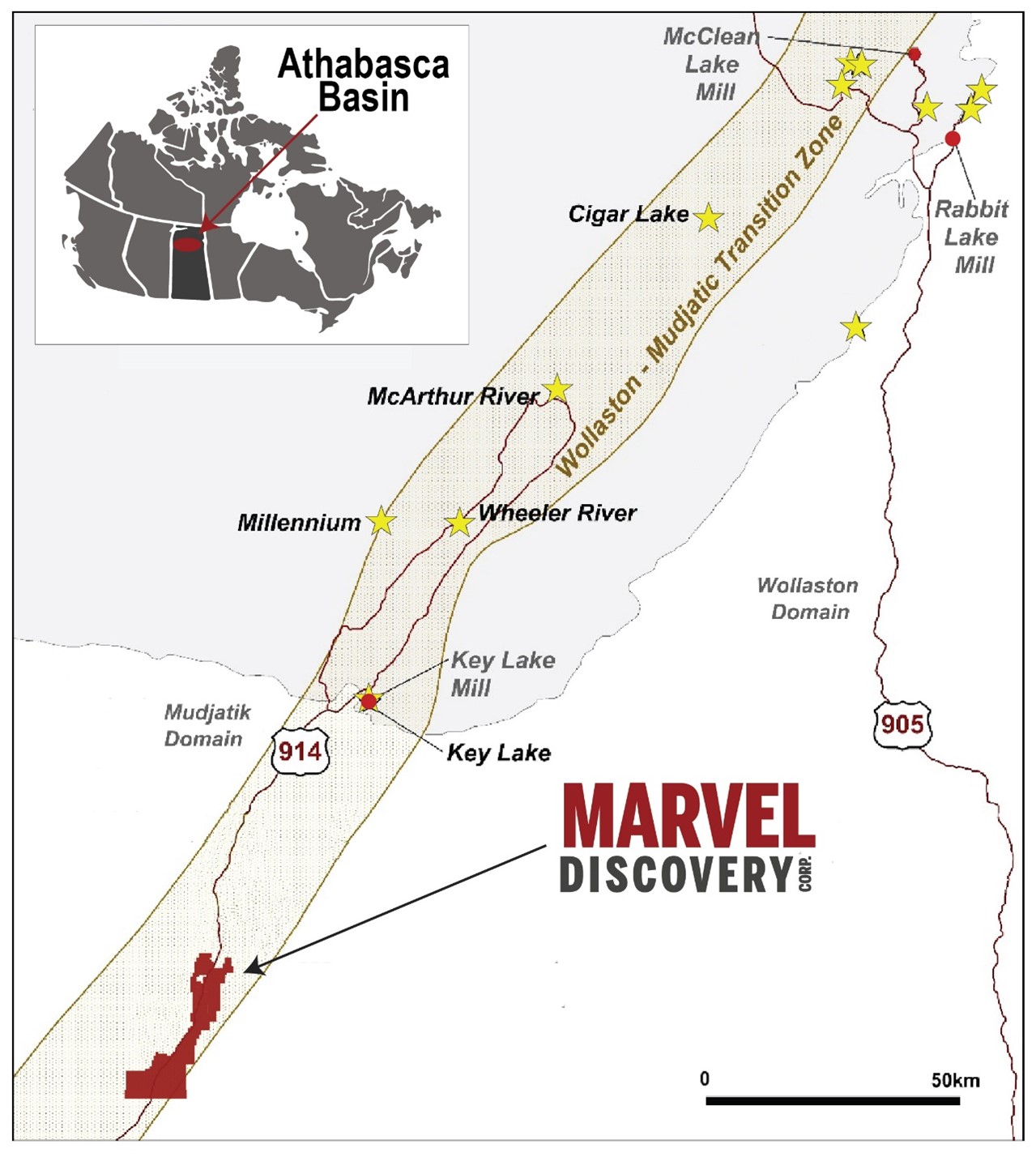 The technical content of this news release has been reviewed and approved by Mike Kilbourne, P.Geo., who is a Qualified Person as defined by National Instrument 43-101, Standards of Disclosure for Mineral Projects. The QP has not completed sufficient work to verify the historic information on the Properties, particularly regarding historical exploration, neighbouring companies, and government geological work. The information provides an indication of the exploration potential of the Property but may not be representative of expected results.

Marvel, listed on the TSX Venture Exchange for over 25 years, is a Canadian based emerging resource company.Â  The Company is systematically exploring its extensive property positions in: