Mayfair Gold Corp. [TSXV-MFG; OTC-MFGCF] announced the initial drill results from the Expansion Zone at the Fenn-Gib Project located in the Timmins region of northeast Ontario. The Expansion Zone lies below the shallow central section of the current conceptual open pit, which strikes east-west over approx. 1.25 kilometers. The drill results reported below are part of the fully-funded, ongoing 50,000-meter (m) Phase 1 drill program at the Fenn-Gib Project. Resource infill and expansion drilling is being supported by four drill rigs, and 32 holes have been completed to date for a total of 23,241m.

Mayfair Gold President and CEO Patrick Evans commented: “The western portion of the plus 2-million-ounce Fenn-Gib deposit was well defined by the previous operators Lake Shore Gold and Tahoe Resources, with disseminated mineralization constrained within a conceptual open pit up to 300m wide and to a depth of approx. 400m below surface. There was only limited wide-spaced resource drilling in the central and eastern sections of the deposit to a depth of approx. 200m below surface. Two of our four drill rigs are targeting this Expansion Zone. We are extremely pleased to be defining additional, higher-grade mineralization in the Expansion Zone, which increases our confidence in the potential to upgrade Fenn-Gib’s resource estimate to plus 3 million ounces by the end of 2021.”

Numerous historic drill holes in the upper portion of the Fenn-Gib deposit did not drill through the entire mineralized stratigraphy, with some holes ending in mineralization. The infill and expansion drill program within and below the current conceptual open-pit is designed to identify additional mineralization.

The Phase 1 drill program commenced at the western section of the Fenn-Gib deposit. Infill drilling in hole FG21-155 returned 241.1m at an average grade of 1.67 g/t gold (Au) from a downhole depth of 11.5m, including 46.4m grading 2.27 g/t Au (news release June 29, 2021). Expansion drilling has also confirmed the presence of a higher-grade Footwall Zone outside and to the north of the Fenn-Gib deposit. Hole FG21-139 intersected 1.94 g/t Au over 38m from a downhole depth of 529m, including 4.06 g/t Au over 15m and 6.45 g/t Au over 6m (news release June 1, 2021). Surface reconnaissance has identified historic trenches with geology that corresponds to the Footwall Zone, indicating that the Footwall Zone extends from surface to at least 500m below surface at a dip of approx. 75 degrees. The lateral extent of the Footwall Zone has been traced over at least 120m to the northeast and appears to remain open along strike. One of the four drill rigs at Fenn-Gib is continuing to delineate the Footwall Zone. 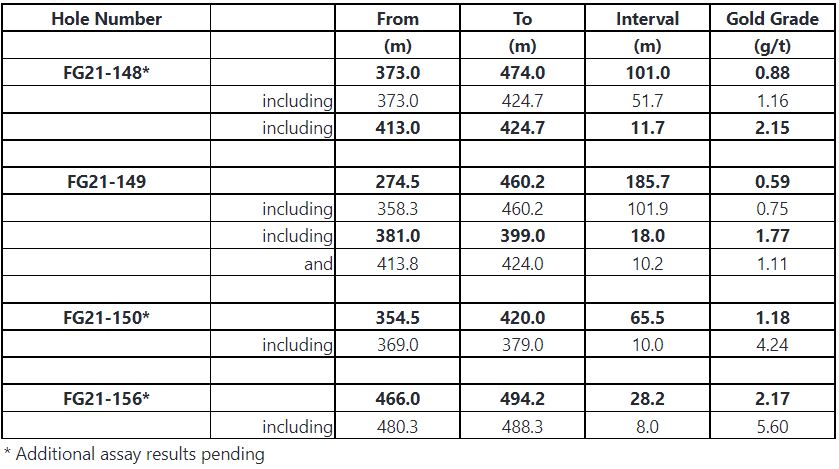