Monarch Mining Corporation (“Monarch” or the “Corporation”) [TSX-GBAR; OTCQX-GBARF] is pleased to announce that it has intersected significant gold mineralization in several diamond drill holes approximately 1 km south of the McKenzie Break deposit, located 25 kilometres north of the Corporation’s wholly owned 750 tonne-per-day Beacon mill. This drilling is part of Monarch’s regional exploration program to test targets on the larger McKenzie Break property, outside the limits of the known deposit.

“This new discovery has the potential to become a game changer for the development of the McKenzie Break property, as it has similar geological characteristics and follows a clear high MAG trendline over a 1-kilometre stretch from the deposit,” said Jean-Marc Lacoste, President and Chief Executive Officer of Monarch. “The next steps will include testing the discovery at depth and along the proposed trendline to confirm its continuity.”

Monarch has tested the current target area, located 1 km south of the mineral resource envelope, with seven drill holes totalling 1,419 metres. Full assay results are available for the three completed holes and partial results for the remaining four holes. A list of significant assay results is presented in Table 1. Best assays include 3.93 g/t Au over 2.83 metres, followed by a second zone 85 metres further down the hole that returned 3.93 g/t Au over 5.45 metres, including 11.58 g/t Au over 1.30 metres (MK-21-281). A second hole, located 125 metres to the north, intersected 1.52 g/t Au over 8.80 metres (MK-21-287). All the remaining holes in the target area for which assay results are available have intersected anomalous gold mineralization; additional assay results for these holes are pending.

The holes were drilled to test shallow targets, typically less than 100 metres below surface, along the same intrusive/volcanic contact that hosts the McKenzie Break deposit. The property covers 9 km of this favourable contact, which is clearly defined in a recent high-resolution helicopter airborne magnetic survey completed by the Corporation (see Figure 1 and Figure 2). Follow-up drilling is warranted along the contact between the current resource and the recent results, as well as to the south.

Monarch will continue exploration drilling on the property to the end of 2021, with one drill rig drilling holes every 50 metres to extending the limits of the current McKenzie Break deposit, and also testing additional regional exploration targets. 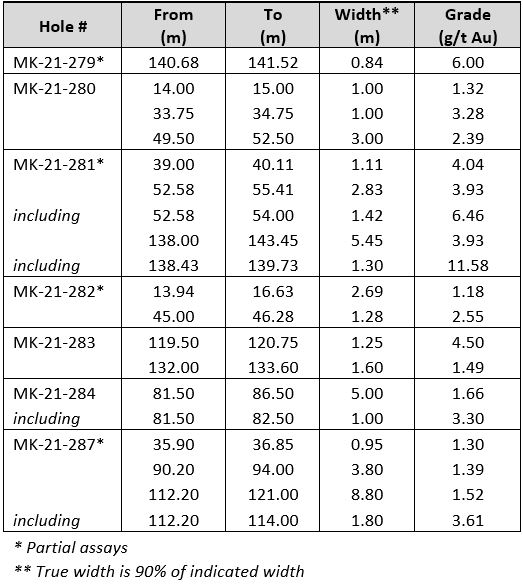 Gold mineralization occurs in an elongated diorite unit or lens within a shallow embayment of the Pascalis Batholith. Monarch continues to have drilling success beyond the limits of the recent resource update provided by Geologica and GoldMinds (see Table 3 and press release dated February 8, 2021). The mineralized envelope currently measures 800 metres by 650 metres and has been tested down to a vertical depth of 400 metres. The Corporation will continue drill testing the limits of the defined mineralized envelope as well as other priority targets on the property, including targets on the newly-staked claims to the south (see press release dated March 8, 2021), with its 20,000-metre drilling program, with approximately 15,765 metres drilled to date, in 45 holes. Drilling has been ongoing since April 2021, with one or two drill rigs, and is expected to continue into 2022. 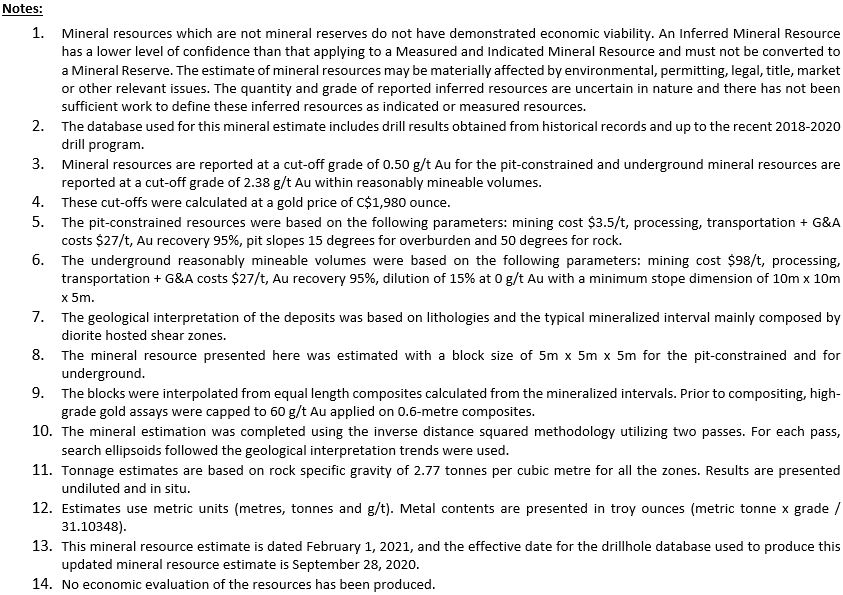 Sampling consists of sawing the NQ-size core into equal halves along its main axis and shipping one of the halves to AGAT Laboratories in Mississauga, Ontario, for assaying. The samples are crushed, pulverized and assayed by fire assay, with atomic absorption finish. Results exceeding 3.0 g/t Au are re-assayed using the gravity method, and samples containing visible gold grains are assayed using the metallic screen method. Monarch uses a comprehensive QA/QC protocol, including the insertion of standards and blanks.

The technical and scientific content of this press release has been reviewed and approved by Louis Martin, P.Geo., the Corporation’s qualified person under National Instrument 43-101.

Monarch Mining Corporation (TSX: GBAR) is a fully integrated mining company that owns four projects, including the past-producing Beaufor Mine, which has produced more than 1 million ounces of gold over the last 30 years. Other assets include the Croinor Gold, McKenzie Break and Swanson properties, all located near Monarch’s wholly owned Beacon 750 tpd mill. Monarch owns 28,702 hectares (287 km2) of mining assets in the prolific Abitibi mining camp that host 478,982 ounces of combined measured and indicated gold resources and 383,393 ounces of combined inferred resources. 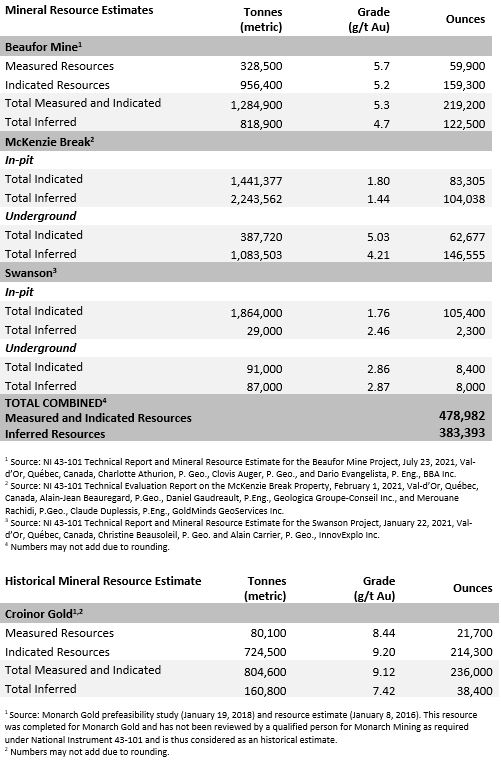