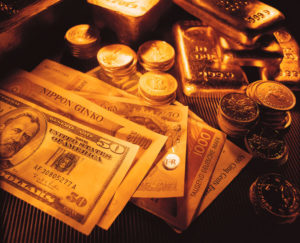 As a gold and silver advocate, I like to recall an earlier era when business was transacted in gold and when workers were paid in gold as well. Not only are the days of private gold coinage gone, but a powerful new trend is developing in nation after nation which may see the end of cash itself. When this trend is combined with yet another, an international move toward negative interest rates on bank deposits, I believe the implications for gold and silver could be enormous.

The move toward a cashless society is well underway in many nations including Germany, Sweden, Norway, Canada, China and the USA. Anyone who doubts the growing power of this movement should consider some of the following information.

In Germany, strong moves are already underway toward limiting cash transactions. According to one of their leading business newspapers, Handelsblatt, Germany’s coalition government has proposed a limit of 5,000 Euros on all cash transactions and the elimination of the 500 Euro note.  The country was told that these moves would, “discourage foreign criminals and laundering would be severely limited.”

Sweden is already far advanced towards a cashless society. As an example, The New York Times reports that the Abba Museum now prohibits cash payment for entry into the museum, which is ironic since the musical group Abba recorded the hit song, Money, Money, Money.

In other ways, Sweden has advanced far along the cashless society path as many banks no longer accept or dispense cash and bill and coin transactions now represent only 2% of Swedish commercial activity.

While the elimination of cash is not yet a government policy in Canada, many people within the country are voluntarily moving toward credit and debit card payments at a remarkable rate and 77% of responders to a recent survey preferred to eliminate cash.

Elsewhere, in China, people are signing up for payment by mobile phone “apps” such as WeChat and Apple Pay in mind-boggling numbers which have recently passed the 400,000,000 mark.  In America, the Bloomberg News Service summarized many of the presumed benefits of a cashless society including, “…inhibiting terrorist financing, money laundering, fraud, tax evasion and corruption.”  However, they did suggest that in order to protect privacy, a rule should be implemented, “…that a person’s transaction history could be accessed only with a court order.”  In Norway, cash usage has declined to just 6% of all such business activities.

Along with this trend, another massive change is coming in the form of negative interest rates on private or commercial bank deposits.  Governments have indicated strong interest toward initiating negative rates as a means of stimulating economic activity.  The logic behind these moves is that if people see their bank holdings diminish in value over time because portions of their balances are being confiscated by negative rates, they will have an incentive to remove the funds from banks and spend them, thereby stimulating economic activity.

However, government economists anticipate a problem if people can remove their money from banks by accepting cash and then hoarding those bills and coins. Therefore, in order to accomplish the goal of stimulation via negative rates, it becomes expedient to advocate the transition to a cashless society – and that is precisely the momentum we are now witnessing.

There are, however, several problems which must be addressed. First, an entirely cashless society would lead to the elimination of privacy in financial transactions as all electronic deals would be permanently recorded. Second, the ability to transact cashless business via computers and business terminals would be vulnerable to power failures – perhaps on a massive scale.  And, in addition, the vast storehouses of data would make an inviting target to cyber-hacking by criminal or foreign forces which has already happened – remember Sony and Target.

Due to these developments, many people are already turning to gold and silver as a means of holding truly private wealth in transferable form and it appears likely that as this de facto confiscation of coins and bills advances, the move toward gold and silver should accelerate, leading to bullish market forces. However, it must also be anticipated that governments would be well aware of this “escape hatch” and gold and silver purchasers must realize the possibility of anti-gold and silver legislation – perhaps such as the Roosevelt laws of 1933 prohibiting the private holdings of precious metals “for the public good.”

It is impossible to forecast all the possible ramifications within these twin moves, but one concept can be stated with some certainty and that is the realization that historic changes in the way we live may be in the offing – and not in the distant future either.

Our only advice is to watch important developments as closely as possible and be prepared.