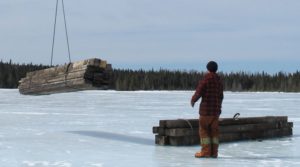 Nickel One Resources Inc. [NNN-TSXV] shares were active Thursday April 4 after the company announced a proposed name change, revisions to a proposed share consolidation, and an increase in the size of a proposed financing.

Nickel One is a platinum group metals, nickel and copper exploration and development company. Its portfolio consists of the Lantinen Koillismaa (LK) PGE-nickel-copper project in north-central Finland, as well as the Tyko nickel, copper, platinum group element property near Marathon Ontario.

On Thursday, the company said it plans to change its name to Palladium One Mining Inc.  The proposed name change is in conjunction with the announcement of revisions to a proposed share consolidation that was initially announced on January 22, 2019.

Earlier in the day, the company said planned to proceed with a private placement offering of up to eight million units priced at $0.08 per unit, with each unit consisting of one share and one full warrant exercisable at $0.12 for 24 months from the date the units were issued.

But in a subsequent press release the company said that due to over-subscribed demand, the offering will now consist of 17 million post-consolidation units priced at $0.08. The gross proceeds are expected to be $1.36 million, up from the previously planned $640,000.

The company said it plans to close the private placement following the completion of the share consolidation and proposed name change.

“The company has two nickel, copper and palladium-rich projects, which have been languishing in recent years as a result of insufficient working capital,” said Nickel One President and CEO Derrick Wayrauch. “The share consolidation will better position the company to raise the funds it requires to finance its ongoing business activities, while the name change will focus the company on its LK Project, to take advantage of market appetite for advanced palladium-dominant investment opportunities.”

Wayrauch went on to say that with a palladium structural supply deficit expected to continue for years, coupled with limited scope for producers to increase near-term supply, palladium has surpassed gold as the highest priced precious metal.

“The company is one of the few exploration companies with an advanced exploration stage palladium project located in the superior, politically safe, mining friendly, jurisdiction of Finland,” he said.