Nicola Mining Inc. [TSX.V: NIM], is pleased to announce and confirm the presence of a previously unexplored mineralized zone north of the historic Craigmont open pit.  The near-surface zone is located within the boundaries of Nicola’s active Mine Permit M-68.  Nicola targeted the area after historic data and recent mapping from the Company’s 2017 and 2018 Exploration Programs revealed the potential of mineralization north of the pit.

The second exploratory diamond drill hole (CC-18-02) targeting the northern extension of the Craigmont Pit Halo (the “Mineralized Halo”) (Figure 1) was located approximately 100 metres from the pit and intercepted 1.05% Copper over 73.6 meters.  The results confirm the existence of an in-situ mineralized halo adjacent to the Craigmont pit that is within the Craigmont Central exploration area. The mineralization within the hole appeared unique because, in addition to chalcopyrite, the presence of bornite was seen for the first time.    Bornite often occurs closer to the source of high-temperature source of copper mineralization.

Frank Hogel, Chairman commented, “It is becoming increasingly clear that this is a very special project.  The Company understands the importance of combining the zones to create one large consolidated deposit.  We look forward to providing additional exploration and operational updates in subsequent news releases.”

Nicola continues to follow up by drilling additional holes to the east and west along the predicted strike orientation in a previously un-drilled area within Craigmont Central. 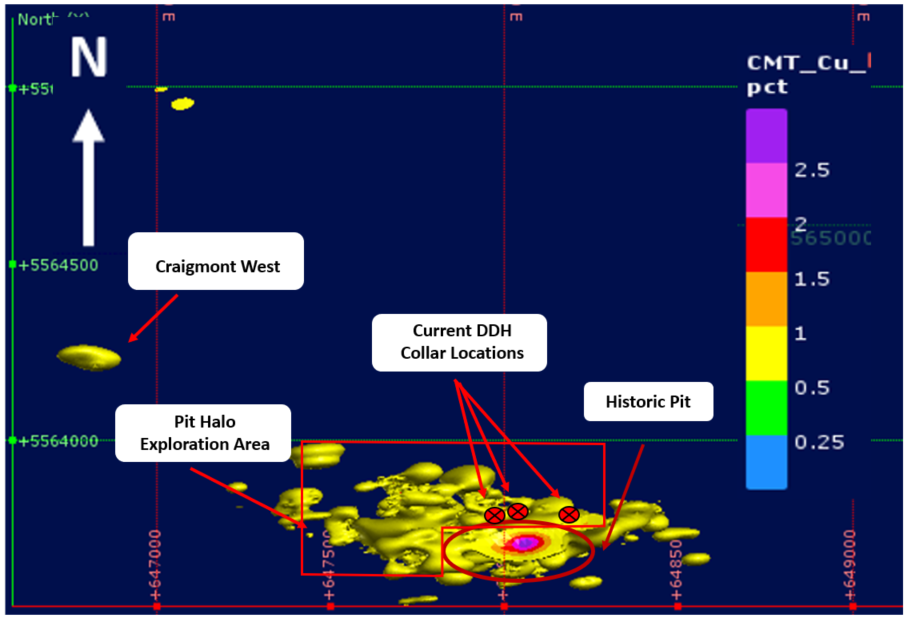 A key target planned for Nicola Mining’s 2018 Exploration Program is exploration of a Mineralized Halo, which represents an outward zonation of mineralization within the altered wall rock of the skarn deposit, particularly along the contact between the Guichon and the Nicola group rocks.

A diamond drilling program is currently underway in a previously undrilled area, 100 meters north of the Historic Craigmont open pit. Continuity of mineralization along strike to the East of hole CC-18-02 has been observed in hole CC-18-03 (assays pending) and step-out hole CC-18-04 is currently being drilled to the west of CC-18-02

This mineralization occurs within an unexplored zone that is within the active mine permit.  While historic Craigmont ore bodies are well-delineated and documented, previous operators conducted minimal exploration beyond proven ore bodies grading below 2.0% copper. The Company’s exploration program continues to target known mineralized zones within the skarn units that were under explored by previous operators. In addition, the Company plans to drill untested porphyry targets which may represent the source of the known skarn hosted copper mineralization of the historic Craigmont mine.

Within Craigmont Central, the western extension of the Pit Halo is well documented in various historic reports including a report produced by Jim Bristow P Eng., which documents a mineralized halo of approximately 50.0 million tonnes surrounding the underground workings, grading over 0.4% Cu. This mineralized halo was never mined by previous operators.

The 2018 Exploration Program focuses on testing previously unexplored sections of the property with the intention of working towards a maiden resource estimate for New Craigmont.

The exploration program announced in the Company’s July 19, 2018 news release is on track, with diamond drilling, reverse circulation drilling and an induced polarization geophysical survey underway. The objective of the program is to test the following five key zones:

The Company does not view the five targets as standalone programs, but, rather, all five targets add to the overall viability and resource of the New Craigmont Project as a whole.

Upon completion and releasing news on the other five 2018 Exploration target zones, the Company will be able to provide a better picture of one substantial project.

Peter Espig, CEO commented, “The initial drill result is very exciting, not only because of the high-grade copper mineralization, but also because of the existence of bornite.  As highlighted by the Bristow Report, we are starting with a solid base that we will continue to add to with exploration.”

All information of a scientific or technical nature contained in this document, including sampling, analytical and test data has been reviewed and approved by Kevin Wells, P. Geo., a consulting Geologist to Nicola Mining. Wells is a Qualified Person as defined by National Instrument 43-101 – Standards of Disclosure for Mineral Projects.

Nicola Mining applies a thorough quality assurance/quality control program at the New Craigmont Project compliant with industry best practices. A qualified geoscientist has logged and sampled all core and samples have been delimited according to lithologic, alteration and mineralization characteristics. This includes systematic insertion of blank, duplicate and certified reference materials into the sample batches by Nicola’s geological staff. Core is then halved, where the sample is placed in a labelled sample bag with sample tag and the other half of the core is retained on site as a physical record. Samples are placed in sealed bags and transported to Actlabs (ISO 17025 Certified) in Kamloops, British Columbia for analysis, following a Chain of Custody. Samples are crushed up to 80% passing 2mm, rifle split (250 g) and pulverized to 95% passing 105 µm. Samples are analyzed using Aqua Regia-ICP-OES 38-element (1E3) packages. All samples greater than 10,000 ppm Copper are tested using over-limit mass spectrometry methods (8-AR). All results included in this release have passed the QA/QC procedures as described above and have been reviewed by Kevin Wells, P.Geo. There are no known factors that could materially affect the reliability of data collected and verified. No quality assurance/quality control issues have been identified to date.

Nicola Mining Inc. is a junior mining company listed on the TSX Venture Exchange and is in the process of recommencing mill feed processing operations at its 100% owned state-of-the-art mill and tailings facility, located near Merritt, British Columbia. It has already signed four mill profit share agreements with high grade gold producers. The fully-permitted mill can process both gold and silver mill feed via gravity and flotation processes. The Company also owns 100% of Treasure Mountain, a high-grade silver property, and an active gravel pit that is located adjacent to its milling operations.

The New Craigmont Project is a wholly-owned copper property with an active mine permit (M-68), located within the world-class Highland Valley porphyry district. It benefits from excellent infrastructure. The Property is at the corner intersection of the Nicola and Guichon batholiths, of which the latter is the precursor to mineralization at Highland Valley. In November of 2015, Nicola became the first group in decades to consolidate ownership of the Property and has been actively conducting mineral exploration since.

There are currently no mineral resource estimates on the Property. Historical “non-NI 43-101” resource calculations are recorded in internal memos and geological reports for Placer Development. An internal memo written by J.F. Bristow on October 30, 1985 to Craigmont Mines Ltd. reported a zone known as Body No. 3 containing a historic estimate of 1,290,000 tons (1,170,268 metric tonnes) of copper grading1.53% copper.  This estimate assumes a 0.7% copper cut-off and a 20-foot mining width between drill sections 6565E and 8015E. The material in Body No. 3 contains mineralization primarily in silicate-rich rocks.