Dr. Michael Byron, President & CEO commented, “We are very pleased to see that the consistent strength and continuity of mineralization hosted by the Colomac and Goldcrest sills continues to deliver strong resource growth. It is notable that to date, the deposit has only had 141,013 metres of drilling, yet is tracking to exceed 3 million ounces with an abundance of real estate not yet explored. The grade sensitivity table illustrates the deposit’s robust nature by revealing that modest changes in cutoff grades result in substantial variations in contained ounces but with limited variations to the average grade. Given that the current resource contains over 50 million tonnes of mineralized material, a number that may only account for less than half of its near surface potential, we believe that assessing a heap leach opportunity for Colomac is not only warranted, but if proven, could drastically change the nature of the opportunity.

“Recent advancements in our understanding of the deposit’s controls on mineralization has led to important revisions to the Colomac geological model. Within the Goldcrest and Colomac sills, the change to a more broadly distributed mineralization model, instead of a constrained and steeply dipping one, has resulted in a more refined and accurate resource estimate, and a substantial increase in resource tonnes. In addition to the ongoing exploration at Colomac, we are also drilling several of our regional gold deposits and showings, building on the gold camp’s vastly underexplored potential beyond Colomac. The first property we drilled prior to consolidating the camp, the Damoti Lake Gold Deposit, will be drilled this summer, in preparation for delivering a maiden resource estimate in early 2019.”

Management will host a conference call and webcast to discuss the updated resource estimate on Wednesday June 13, 2018 at 10:00am ET. To access the webcast and for further details, please visit the Company website www.nighthawkgold.com.

Note: The reader is cautioned that the figures in this table are not a Mineral Resource Statement. The figures are only presented to show the sensitivity of the block model estimates to the selection of cut-off grade.

The mineral resource estimate was prepared by CSA Global, Toronto, Ontario, in accordance with NI 43-101 and has been reviewed internally by the Company. The full technical report will be available on SEDAR within 45 days of the date of this release. All resources have been assigned to the inferred category due to the historic nature of a significant portion of the data and the need for additional verification work. Mined volumes of the Colomac Main Sill have been deleted from the current resource model.

The current study incorporates an updated geological model refined by orientated core measurements collected by the company during its 2016 and 2017 drill campaigns. Initial measurements indicate that mineralized vein sets are generally shallow dipping. This contrasts with the 2013 resource modelling where steeply dipping shears and veins were considered the dominant controls to mineralization and were deemed best represented using a 0.50 gpt Au grade shell. However, based on the latest drill core orientation work this is no longer considered valid. Consequently, gold mineralization is modelled to be more broadly distributed and flat lying. This change has resulted in the delineation of mineral resources over a shorter down dip extent resulting in resource tonnage increases throughout the Colomac deposits. Increased drilling and the introduction of oriented core measurements has significantly advanced the understanding of Colomac mineralization, resulting in a much more refined and robust geological model, which in turn has generated a more accurate and representative mineral resource estimate to build upon.

The high-grade Zone 1.5 at Colomac was discovered by the Company in 2014, and since then 14,660 metres of drilling has led to the delineation of 5,347,000 tonnes at an average grade of 1.85 gpt Au for 317,000 ounces of gold. The new resource modelling method lacked the necessary information to delineate a constrained domain to the Zone’s central core of higher-grade mineralization.  Instead, the approach treats mineralization as being more broadly distributed over the width of the mineralized portion of the sill. Future modelling refinements are expected to allow domaining of the higher-grade core of this zone with future drilling.

Resource blocks at Zone 1.5 extend 490 metres below surface.  However, two holes drilled by Nighthawk in 2017 to explore the zone at depth intersected continuous mineralization to 900 metres below surface outside and below the current resource. Here the zone’s pervasive mineralization appears to triple in true width and remains open (see press releases dated September 18, 2017 and November 28, 2017).  New drilling at Zone 1.5 accounts for the majority of the 118% increase in gold ounces at Colomac North (Table 1) relative to the 2013 mineral resource estimate and demonstrates the dynamic resource expansion potential that high-grade zones represent at Colomac.

At Goldcrest Main (formerly referred to as Goldcrest South), 11,246 metres of new drilling extended the maximum depth of the resource model from 150 metres to 300 metres below surface, where it remains open. Infill drilling and the availability of new sample data has allowed the removal of partially assayed historical drill holes resulting in a higher average modelled thickness. The increase in the size of the model has added 2.20 million tonnes at an average grade of 1.50 gpt Au resulting in an additional 106,120 ounces of gold.

A minimum, 25,000 metre drill program was initiated in early March with three drills to be active on Colomac area resource expansion targets, as well as on several of the Company’s regional deposits and prospects.  At Colomac, exploration for additional high-grade zones is ongoing, as is drilling to infill areas in the current resource in preparation for a future resource update.  It is anticipated that the next resource estimate will include indicated resource numbers for Zone 1.5 and Zone 3.5. Expanded metallurgical testing is scheduled for 2018 with sampling of additional zones along the Colomac and Goldcrest sills. This program will also involve a greater number of tests to continue evaluating the deposit’s heap leach potential. 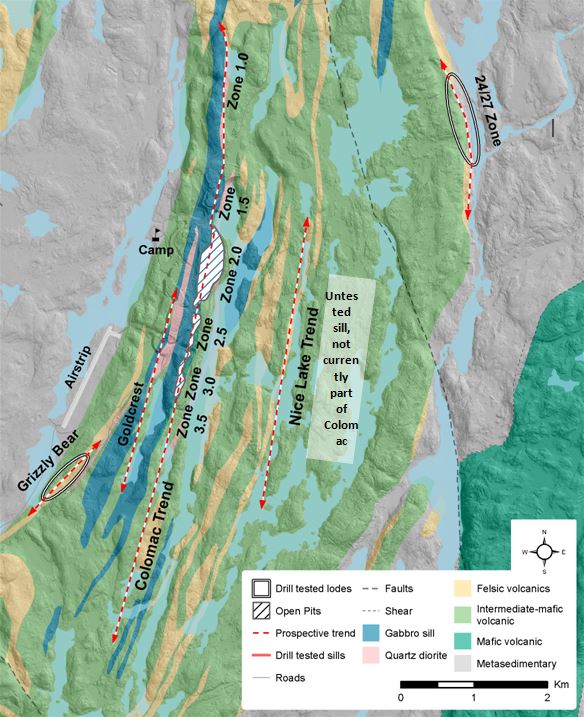 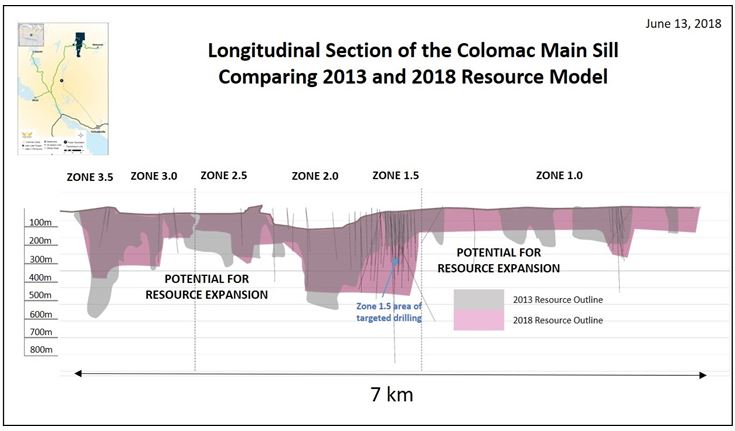 About the Colomac Gold Project

The Colomac Gold Project lies within the central portion of Nighthawk’s Indin Lake Gold Property, 220 kilometres northwest of Yellowknife, Northwest Territories. Access is by winter road from Yellowknife or year-round by chartered aircraft to a 5,000-foot airstrip at the former Colomac Mine site. Nighthawk has secured a contiguous land position fully surrounding the Colomac Gold Project by consolidating more than 90% of the Indin Lake Greenstone Belt including the related Indin Lake Gold Camp. The Colomac Gold Project contains at least five separate gold deposits open in all dimensions (Colomac Main Sill, Goldcrest Sill, Grizzly Bear, 24 and 27), only one of which, the Colomac Deposit, was historically mined. Intermittent mining from 1990 to 1997 was limited to three shallow open pits developed on a steeply dipping differentiated mafic intrusion (Colomac Main Sill). Historical production is reported to be 527,908 ounces gold with an average head grade of 1.66 gpt gold. Mining activities impacted only a small portion of the sill’s 7 kilometre mineralized strike length. All mining and processing equipment and infrastructure have been removed from the Colomac Property.

Technical information related to the mineral resource estimate contained in this news release has been reviewed and approved by Leon McGarry, B.Sc., a Senior Resource Geologist with CSA Global, who is an independent Qualified Person as defined by NI 43-101, with the ability and authority to verify the authenticity and validity of this data. The technical report supporting the mineral resource estimate will be filed on SEDAR within 45 days.

Dr. Michael J. Byron, Ph.D., P.Geo., President & Chief Executive Officer of Nighthawk, who is the “Qualified Person” as defined by NI 43-101 for this project, has reviewed and approved of the technical disclosure contained in this news release.

Nighthawk has implemented a quality-control program to comply with best practices in the sampling and analysis of drill core.  Drill core samples were transported in security-sealed bags for analyses at ALS Chemex Assay Laboratory in Vancouver, BC (“ALS Chemex”).  ALS Chemex is an ISO 9001:2000 certified laboratory. Pulp and metallics assaying for gold was conducted on the entire pulverized sample.

As part of its QA/QC program, Nighthawk inserts external gold standards (low to high grade) and blanks every 20 samples in addition to the standards, blanks, and pulp duplicates inserted by ALS Chemex.

Nighthawk is a Canadian-based gold exploration company with 100% ownership of a district-scale land position within the Indin Lake Greenstone Belt, located approximately 200 km north of Yellowknife, Northwest Territories, Canada. Nighthawk is focused on advancing the Colomac Gold Project with a current inferred resource of 2.613 million ounces of gold (50.305 million tonnes at an average grade of 1.62 grams per tonne), as well as advancing its other regional gold deposits and showings within this largely underexplored Archean gold camp.

Neither the Toronto Stock Exchange has neither reviewed nor accepts responsibility for the adequacy or accuracy of this news release.

Cautionary Note Regarding Estimates of Resources

This news release contains “forward-looking information” within the meaning of applicable Canadian securities legislation. Forward-looking information includes, but is not limited to, information with respect to the Company’s 2018 drill program including anticipated metres of drilling and budget, and the timing and results thereof; an anticipated resource estimate on the Damoti Lake Gold Deposit, and the timing and results thereof; updated resource estimate for the Colomac Gold Project, the anticipation of adding tonnes and ounces, and the possibility of upgrading inferred ounces to indicated ounces; and any potential development and production assumptions at Colomac. Generally, forward-looking information can be identified by the use of forward-looking terminology such as “plans”, “expects”, or “does not expect”, “is expected”, “budget”, “scheduled”, “estimates”, “forecasts”, “intends”, “anticipates”, or “does not anticipate”, or “believes” or variations of such words and phrases or state that certain actions, events or results “may”, “could”, “would”, “might”, or “will be taken”, “occur”, or “be achieved”.

Forward-looking information is based on the opinions and estimates of management at the date the information is made, and is based on a number of assumptions and is subject to known and unknown risks, uncertainties and other factors that may cause the actual results, level of activity, performance or achievements of Nighthawk to be materially different from those expressed or implied by such forward-looking information, including risks associated with the exploration, development and mining such as economic factors as they effect exploration, future commodity prices, changes in foreign exchange and interest rates, actual results of current exploration activities, government regulation, political or economic developments, environmental risks, permitting timelines, capital expenditures, operating or technical difficulties in connection with development activities, employee relations, the speculative nature of gold exploration and development, including the risks of diminishing quantities of grades of reserves, contests over title to properties, and changes in project parameters as plans continue to be refined as well as those risk factors discussed in Nighthawk’s annual information form for the year ended December 31, 2016, available on www.sedar.com.  Although Nighthawk has attempted to identify important factors that could cause actual results to differ materially from those contained in forward-looking information, there may be other factors that cause results not to be as anticipated, estimated or intended. There can be no assurance that such information will prove to be accurate, as actual results and future events could differ materially from those anticipated in such information. Accordingly, readers should not place undue reliance on forward-looking information. Nighthawk does not undertake to update any forward-looking information, except in accordance with applicable securities laws.