Nighthawk Gold Corp. (TSX: NHK; OTCQX: MIMZF) is pleased to announce results from the second generation of preliminary metallurgical test work on material from the Colomac deposit, part of the Colomac Gold Project. This second phase of testing focused on the high-grade mineralization and showed exceptional gold recoveries of up to 98.0%. 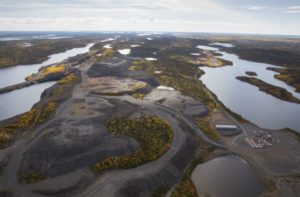 Testing was completed at Bureau Veritas in Richmond, BC, and audited by Starkey & Associates Inc. in Oakville, Ontario.Â  The current study involved mineral process test work on one higher grade sample from Zone 1.5, while the previous study reported on lower grade material consisting of three drill core composite samples from various areas of the Colomac Main Sill. Results show a relatively uniform hardness for material tested to-date and both studies indicate that the rock is amenable to all standard gold recovery technologies. Testwork indicated that when using a combination of gravity recovery and cyanide leaching, gold recoveries of up to 96.5% in the lower grade material (see press release dated April 19, 2017), and up to 98.0% were achieved in the higher-grade rock representing a significant increase in recovery over the historic production results of 88.1% (1994 to 1997).Â  Additional test work is being planned to further broaden investigations to include more of Colomacâ€™s other discrete mineralized zones.

Dr. Michael Byron, President & CEO commented, â€œResults from metallurgical testing to-date (both the low-grade and the high-grade material), although preliminary in nature, show the rock at Colomac to be exceptional in terms of grind characteristics, gold recoveries, purity, and responsiveness to all standard gold recovery technologies. We were particularly encouraged by the preliminary heap leach bottle roll test recoveries on the lower grade rock which showed recoveries of 81.8%. As such we have performed another bottle roll test on the higher-grade material and a more strenuous column percolation test, the results of which will be provided once available.â€

As we continue to advance the project, we will perform additional metallurgical testing on various zones and deposits within the Cololmac Project, including ongoing scrutiny of a potential heap leach option for the project.â€

A single drill core sample from Colomacâ€™s high-grade Zone 1.5, totalling 70 kilograms of split drill core, was submitted for mineral process test work. As in the previous study, the higher grade sample was assayed for gold (Table 1), tested for grindability using the SAGDesign methodology (Table 2) and for amenability to several gold recovery processes (Table 3). For comparison, results from both studies are summarized in the tables below. Preliminary grinding test results to-date indicate that all four samples exhibit a consistent high hardness, and minor variability, presenting no milling issues.Â  The average SAG grindability for the four samples was measured as 13.15 kWh/tonne (Grinding from F80 6â€ to P80 1.7 mm) and 14.48 kWh/tonne for the Bond Ball Mill Work Index on SAG ground rock. 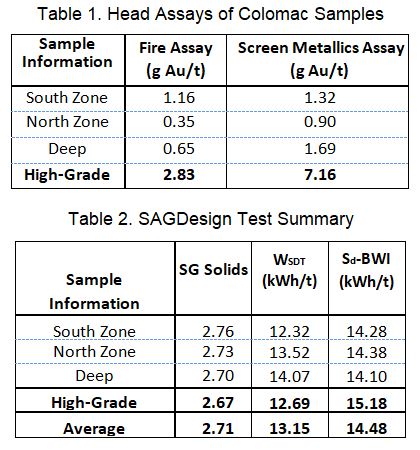 The high-grade sample had a head grade of 2.83 grams per tonne gold as determined by fire assay, was tested for gold recovery amenability, specifically by cyanide leaching, flotation, and gravity separation.Â  Favourable recoveries were achieved for all process options. Â Gold recoveries by flotation ranged from 90.7% – 94.6% with maximum recoveries achieved at a feed size F80 of 75 microns, while highest recoveries of 98.0% were achieved by a combination of gravity and cyanidation.

Preliminary test work indicates that the Colomac deposit is amenable to all standard recovery technologies, however future studies will be broadened to include samples from other gold zones within the mineralized sills, and to continue scrutinizing the heap leach potential of Colomac rocks. The main purpose is to confirm that metallurgical responses observed so far apply over a broader range of head grades and zone locations.

The technical information disclosed herein was prepared under the supervision of Dr. Alice Shi of Bureau Veritas and Mr. John Starkey of Starkey & Associates Inc., who is considered a â€œQualified Personâ€ Â as defined by NI 43-101 for the metallurgical testing performed on behalf of Nighthawk Gold Corp. Mr. Starkey has supervised the metallurgical work reported on and has reviewed and approved the technical disclosure contained in this news release with respect to such work.

Dr. Michael J. Byron, Ph.D., P.Geo., President & Chief Executive Officer of Nighthawk, the Qualified Person as defined by NI 43-101 for this project, has observed the collection of the samples for metallurgical testing, reviewed the progress on the metallurgical testing on multiple occasions and has reviewed and approved of the technical disclosure contained in this news release. Please refer to NI 43-101 technical report â€œTechnical Report and mineral resource estimate update on the Colomac Property of the Indin Lake Projectâ€, dated June 17, 2013, as filed under the companyâ€™s profile on www.sedar.com.

Nighthawk is a Canadian-based gold exploration company with 100% ownership of a district-scale land position within the Indin Lake Greenstone Belt, located approximately 200 kilometres north of Yellowknife, Northwest Territories, Canada. Nighthawk is focused on advancing the Colomac Gold Project with a current inferred resource of 2.1 million ounces of gold (39.8 million tonnes at an average grade of 1.64 grams per tonne), as well as advancing its other regional gold deposits and showings within this Archean gold camp.