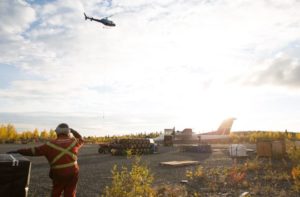 Nighthawk Gold Corp. (TSX: NHK; OTCQX: MIMZF) is pleased to announce that several new gold discoveries have been made within its 100% owned Indin Lake Gold Property in the Northwest Territories, Canada.  Summer field activities began in June shortly after the culmination of the 2017 winter drill program and ground geophysical surveys. Fieldwork focused on several priority target areas leading to the discovery of a high-grade gold showing at Treasure Island, a new mineralized gold zone within the Nice Lake Sill, a newly defined and extensive gold system associated with the Swamp prospect, and enhanced definition and expansion of the high-grade gold trend at Leta Arm (Figure 1).

Dr. Michael Byron, President & CEO commented, “Nighthawk is the first company to consolidate the Indin Lake gold camp, including all its gold mines, deposits, and showings.  We have been active in the area since 2009, but 2017 was our most ambitious campaign to-date. The 2018 program will build upon our 2017 initiatives and successes with increased drilling, ground geophysics, detailed geological mapping, structural studies, and prospecting. The camp has never seen this scale of activity, and given its largely underexplored state, additional near-surface discoveries are to be expected.

“Being well capitalized, we are fortunate to have been able to steadily expand our regional exploration activities outside of Colomac, and advance some of our other prospective Indin Lake area deposits and prospects. Colomac is already a multi-million-ounce gold deposit, with a new high-grade storyline that sits in the centre of an Archean gold camp populated with numerous near-surface gold deposits and showings.  Given the camp’s underexplored nature, we see tremendous opportunity for expansion of known prospects as well as for new discoveries.”

Treasure Island is located 11 km north of the Colomac Gold Project (“Colomac”), (Figure 1) along a 6 km mineralized corridor that hosts several gold showings. The Treasure Island Main Zone lies along the southern edge of the island and consists of at least four stacked mineralized panels in association with a sheared volcanic/sedimentary rock contact and felsic dyke. In 2011 Nighthawk drilled five holes into the Main Zone all of which intersected gold mineralization (see press release dated May 31, 2011, and March 21, 2018). Drilling confirmed historical accounts of gold along the disrupted contact, extended existing zones in all dimensions, and intersected new zones at depth.  Shallow mineralization was also intersected by all holes within mafic volcanic rocks immediately north of the Gamble Dyke, a quartz-feldspar porphyry dyke that runs parallel to the volcanic rock/sedimentary rock contact.  The east-west oriented zone was traced for over 150 metres and remains open in all dimensions.  The area between the Main Zone and the East Zone (located 600 metres to the east) remains untested, as does the 4 km that separates Treasure Island from the Laurie Lake gold showing to the west, where shallow historical drilling intersected narrow zones of mineralization along the volcanic/sedimentary rock contact up to 12.31 gpt Au. More than 75% of this mineralized corridor is yet to be explored.

2017 prospecting activities explored prospective regions outside of the Main Zone resulting in a new discovery, the “Seadog showing”, located along the island’s northwest shoreline (Figure 2), approximately 1 km north of the Main Zone where grab samples returned assays up to 27.80 gpt Au.  Channel samples from outcrops 160 meters to the west also returned several high-grade gold numbers.  Although a small bay separates the two locations, the showings are believed to be related given the trend of mineralized quartz veins, and the similarities in style of alteration and mineralization. Channel sampling at both locations has confirmed their high-grade nature with the best results of 19.85 gpt Au over 1.0 metre coming from the western outcrop area. A channel sample from the showing’s eastern extension returned a weighted average of 7.48 gpt Au over 1.5 metres, including 10.85 gpt Au over 0.5 metres. The true width of the zone remains unknown at this time. Select assay results from grab and channel sampling are presented in Table 1.

Surface grab samples taken by Nighthawk in 2011 at the historical Booty showing along the northern shore of the island (750 metres east of the Seadog showing), returned up to 13.35 gpt Au (Figure 2). These locations were resampled in the 2017 regional exploration program. Select assay results from that sampling are presented in Table 2. Ground geophysical surveys (Induced Polarization and Magnetometer) will be completed this winter over most of the island in preparation for exploration drilling later in the 2018 campaign.

The base of the Colomac and Goldcrest sills define its magnetic high nature. In 2016, prospecting east of Colomac focussed on several linear magnetic trends generated from the Company’s reprocessing of its proprietary airborne and ground surveys. A large linear anomaly 1.5 km east of Colomac showed similarities in magnetic intensity and anomaly shape to both sills.  Crews working the area discovered that magnetic highs corresponded to areas of quartz diorite bedrock similar to the Colomac and Goldcrest sills.  The Nice Lake sill was subsequently traced over 4.0 km in outcrop along a trend sub-parallel to the Colomac sill. Anomalous grab samples (up to 2.61 gpt Au) were collected over much of its length (see press release dated February 7, 2017).

In 2017 follow-up field work was directed at better delineating and characterizing the discovery and resulted in the delineation of a new zone, the “Nice Lake Trend”, where grab samples returned up to 4.19 gpt Au. Mapping carried out between Colomac, Nice Lake, and areas east of Nice Lake revealed that multiple smaller sills exist within this 2-km-wide corridor. Subsequent prospecting discovered that additional sills are present further north and south of that which was previously known, expanding the length of the corridor to over 10 km. Detailed geological mapping has shown that sills in the corridor exhibit the same intensity of deformation and alteration as that found in association with gold within the Colomac Sill.

The new Nice Lake Trend is exposed over a strike length of 160 metres and a minimum width of 20 metres. The grades reported in Table 3 are of the same scale as surface samples recently collected from the Colomac open pits; a strong positive indication of this area’s potential.

Prospecting in the 1940’s led to the discovery of the Swamp gold prospect located 7.5 km northwest of Colomac. Historical bedrock sampling in 1987 returned results as high as 17.47 gpt Au from quartz veins within a northeast trending shear zone. Gold occurs in association with a large deformation zone and intense iron-carbonate alteration; both are hallmark features of Archean lode-gold deposits similar to those found within the Timmins Gold Camp. An altered gabbro intrusion lies east of the main Swamp showing and hosts gold mineralization in 15 centimetre to 1.5 metre wide quartz-carbonate veins. Intense silicification as well as iron-carbonate define the alteration. Results from historical channel sampling report best values of 33.00 gpt Au over 35.0 centimetre and 10.68 gpt Au over 1.0 metre.

Nighthawk has defined the core of the showing has an across strike outcrop width of roughly 85 meters and its highly strained and altered corridor has been traced for approximately 400 meters to the southwest (Figure 3). Assays returned up to 44.00 gpt Au from sampling by Nighthawk in 2012 and up to 4.33 gpt Au from grab samples taken in 2017, with more than 45% of recent sampling returning anomalous gold.  Preliminary channel sampling has confirmed higher grades, returning 2.98 gpt Au over 1.0 metre. Detailed sampling has now revealed that a broad area of anomalous gold is associated with the showing with a minimum footprint of 1.6 km by 1.0 km. As such, this target has been upgraded and will see additional testing in 2018 to better define this new domain, including more extensive channel sampling and Induced Polarization (IP) and magnetometer ground surveys to assist with subsequent drill targeting. Select assay results from the sampling program at the Swamp Prospect are presented in Table 4.

Leta Arm is located 15 km southwest of Colomac, along the Leta Arm Fault Zone (“LAFZ”), a broad feature parallel to the northern extension of the West Bay – Indin Lake Fault Zone; a major regional structure hosting the former producing Giant and Con gold mines to the south (13 million ounces of historic gold production). In 2011 Nighthawk drilled 10,536 metres at Leta Arm, and an additional 1,314 metres in 2017 (see press release dated January 17, 2018). Results to date have confirmed the area’s exciting near-surface discovery opportunities, and the overall untapped potential of this extensive mineralized corridor. Leta Arm is discussed in more detail in the press releases dated January 17, 2018 and March 20, 2018.

Outcrop sampling in 2017 along the 10-kilometer long corridor continues to define the high-grade gold trend with assays up to 95.4 gpt Au and 29.4 gpt Au (Figure 4). Gold mineralization is associated with both flat lying and vertical quartz-carbonate veins found near and within the LAFZ. Select assay results from grab samples collected along the corridor are presented in Table 5.

Drilling in 2018 will focus on extending the deposits and exploring for a potential connection along strike, while actively searching for new deposits along the LAFZ.  Leta Arm remains a key area of interest for the Company. The abundance of its near-surface deposits and expansive mineralization, their largely underexplored state yet impressive mineralized widths, and proximity to Colomac, make them valuable assets as potential feed to augment possible future production at Colomac. 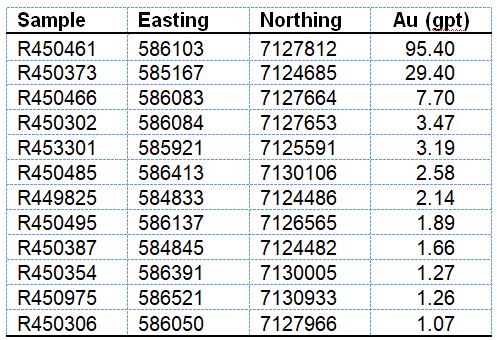 Within its 899 km2 land package Nighthawk has many other highly prospective and untested prospects.  Several of these (Damoti Lake, Fishhook, Echo-Indin, JPK, Andy Lake, Laurie Lake, West Cass) are candidates to be tested in 2018, as the Company continues to aggressively build on its regional gold camp strategy of discovering and evolving near surface gold deposits to augment its ever growing Colomac Gold Project. 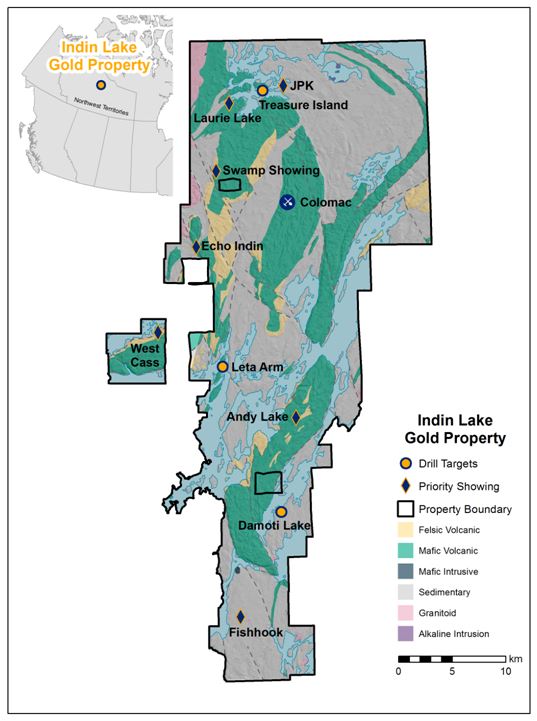 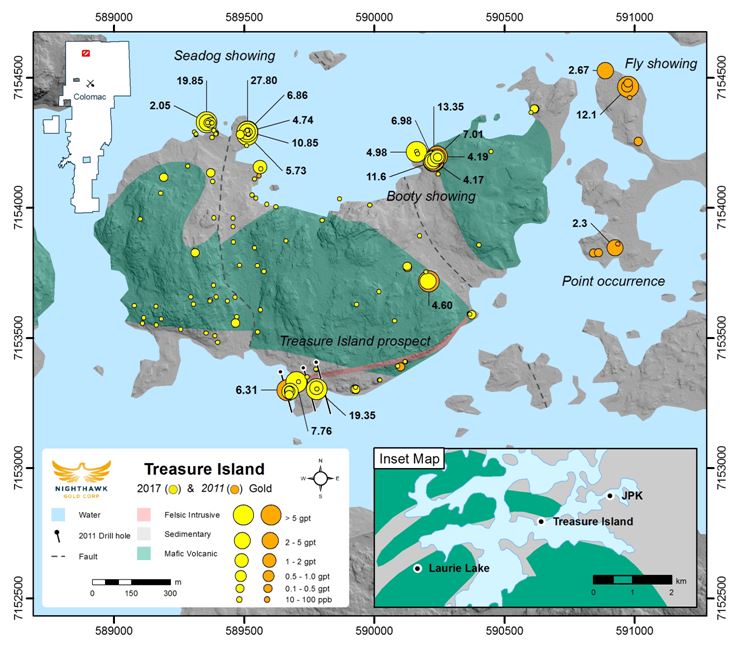 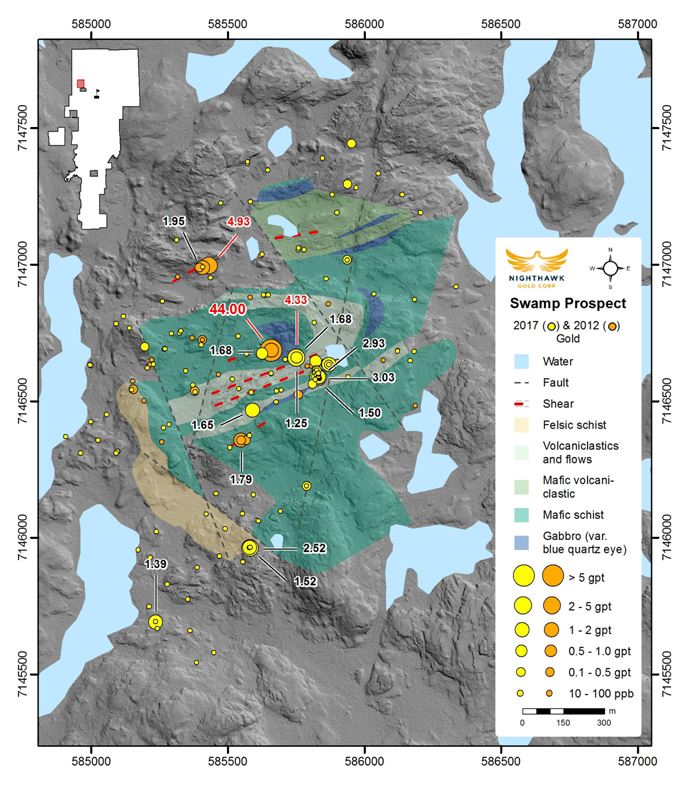 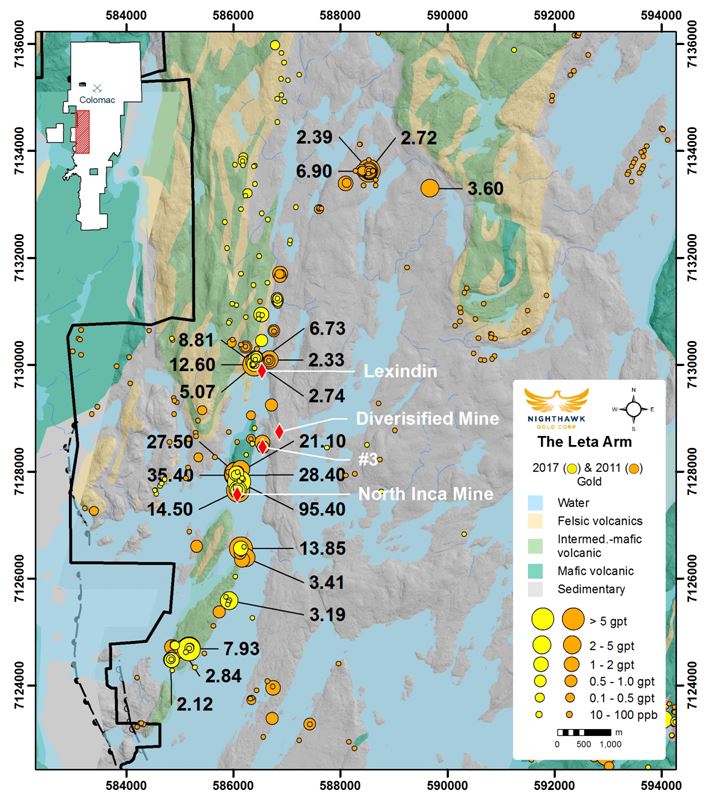 Nighthawk has implemented a quality-control program to comply with best practices in the sampling and analysis of drill core.  Drill core samples were transported in security-sealed bags for analyses at ALS Chemex Assay Laboratory in Vancouver, BC (“ALS Chemex”).  ALS Chemex is an ISO 9001:2000 certified laboratory. Pulp and metallics assaying for gold was conducted on the entire pulverized sample.

As part of its QA/QC program, Nighthawk inserts external gold standards (low to high grade) and blanks every 20 samples in addition to the standards, blanks, and pulp duplicates inserted by ALS Chemex.

Dr. Michael J. Byron, Ph.D., P.Geo., President & Chief Executive Officer of Nighthawk, who is the “Qualified Person” as defined by NI 43-101 for this project, has reviewed and approved of the technical disclosure contained in this news release. Please refer to NI 43-101 technical report “Technical Report and mineral resource estimate update on the Colomac Property of the Indin Lake Project”, dated June 17, 2013, as filed under the company’s profile on www.sedar.com.

Nighthawk is a Canadian-based gold exploration company with 100% ownership of a district-scale land position within the Indin Lake Greenstone Belt, located approximately 200 km north of Yellowknife, Northwest Territories, Canada. Nighthawk is focused on advancing the Colomac Gold Project with a current inferred resource of 2.1 million ounces of gold (39.8 million tonnes at an average grade of 1.64 grams per tonne), as well as advancing its other regional gold deposits and showings within this Archean gold camp.

Neither the Toronto Stock Exchange has neither reviewed nor accepts responsibility for the adequacy or accuracy of this news release.