To the east, Nunavut is the newest, largest, and northernmost territory of Canada. It was separated from the Northwest Territories on April 1, 1999 when the Nunavut Land Claims Agreement Act, which provided the territory to the Inuit people for independent government. Nunavut covers just over 1,877,787 km2 (725,018 sq. mi.), or not quite the size of Mexico.  For 2021, its population totalled 39,407 persons.

Nunavut includes part of the mainland, most of the Arctic Archipelago, and all of the islands in Hudson Bay, James Bay and Ungava Bay.

As might be expected, both territories have seen exploration and mining operations. The most exciting mineral discovery in decades was the 1991 discovery of diamonds in the Lac de Gras region about 300 km northeast of the NWT capital of Yellowknife. This led to diamond mine developments where three are still producing – Ekati (Dominion Diamond Mines), Diavik (Rio Tinto/Dominion Diamond Mines), and the Gahcho Kué diamond mine of Mountain Province Diamonds Inc. [MPVD-TSX]/De Beers located 280 km northeast of Yellowknife.

The diamond discovery that started it all by Dr. Charles Fipke, head of Dia Met Minerals, and Stewart Blusson, triggered a massive staking rush the size of Europe. Chuck Fipke, ex-wife Marlene, son Mark and their team paid their dues exploring the barrens and processing samples.

On the exploration side, Avalon Advanced Materials Inc. [AVL-TSX] has a positive feasibility study on its 100%-owned Nechalacho Rare Earth Elements Property, located at Thor Lake, 100 km southeast of Yellowknife. The property hosts a rich polymetallic rare metals resource, with potential for economic recovery of the rare earth elements (REE), lithium, zirconium, beryllium, niobium and tantalum. Avalon initially focused its work on the heavy REE-rich Basal Zone deposit (2008-2013), which was the subject of the 2013 Feasibility Study.

Equity Metals Corp. [EQTY-TSXV] has a JV interest in the Monument Diamond Project on the south shore of Lac De Gras. The project owners are Equity Metals (57.49%); Chris and Jeanne Jennings (22.11%); and Archon Minerals Ltd. [ACS-TSXV] (20.4%). Equity, De Beers and Archon have the nearby WO diamond exploration project.

North Arrow Minerals Inc. [NAR-TSXV], ~21%, has recovered 232 microdiamonds from the Anchor kimberlite at the LDG Joint Venture Diamond Project, a prospective property located just south of the Diavik Diamond Mine. Dominion Diamond is the operator with a ~79% interest.

North Arrow has also identified a compelling drill target at the head of a regional kimberlite indicator mineral train at its 100%-owned Loki Diamond Project in the Lac de Gras region.

Olivut Resources Ltd. [OLV-TSXV] has a 100% interest in the flagship HOAM Project in the Interior Plains region of the NWT near Fort Simpson where 29 kimberlite discoveries have been made.

However, there is more to the NWT than diamonds.

Fortune Minerals Ltd. [FT-TSX] has a 100% interest in the Nico Project. an advanced critical minerals project that comprises an open-pit and underground mine and mill 160 km northwest of Yellowknife,  and a related hydrometallurgical refinery in Southern Canada to treat concentrates from the mine and produce cobalt sulphate, gold doré, bismuth ingot and oxide, and copper precipitate.

Silver Range Resources Ltd. [SNG-TSXV] has gold projects in the Yellowknife region, all with high-grade gold showings, including Itchen, Sparta and Hare.

Sixty North Gold Mining Ltd. [SXTY-CSE] has an option to earn an 80% interest in the Mon Gold Project, subject to a 20% carried interest and a 2% net smelter returns royalty, by spending $6 million on the project prior to the end of April, 2021. The company is aiming to place the Mon mine back into production in the near future. See more details below.

On May 14, 2019 Agnico Eagle Mines achieved commercial production at their Meliadine Mine 290 km southeast of the Meadowbank Mine.

Agnico-Eagle recently acquired TMAC Resources Inc. which owned and operated the Doris underground gold mine on their Hope Bay property.

Aston Bay Holdings Ltd. [BAY-TSXV] has an option agreement with American West Metals (AWML), a private Australian company, and Tornado Metals Ltd., a wholly-owned subsidiary of AWML which has an option to earn an 80% interest in Aston Bay’s 100%-owned property Somerset Island, Nunavut which hosts the high-grade Storm Copper Project and the high-grade Seal Zinc Deposit.

Gold79 Mines Ltd. [AUU-TSXV] and Agnico Eagle have planned a drill program at the Greyhound Project in the Churchill region.

Blue Star Gold Corp. [BAU-TSXV] reported gold assay results for the Flood Zone at the advanced stage Ulu gold project that returned 14.95 g/t gold over 13.8 metres (upper zone) and 9.65 g/t gold over 6.00 metres (lower zone). The company significantly increased in its land holdings in the highly prospective and underexplored High Lake Greenstone Belt in Nunavut following an agreement to acquire a 100% interest in the Roma Project claims. Their Hood River gold property is adjacent to the Ulu property and 115 km north of the Lupin Gold Mine.

Norgold, [Private], through its Canadian subsidiary, Northquest Ltd., is the 100% owner of the high-grade Pistol Bay gold project on the west shore of Hudson Bay.

North Arrow Minerals Inc. [NAR-TSXV] has the 100%-owned Naujaat diamond project on the Melville Peninsula where the company has discovered a kimberlite field.

Sabina Silver Corp. [SBB-TSXV] has filed a positive Feasibility Study for its Goose Project in the Back River Gold District.

Solstice Gold Corp. [SGC-TSXV] has five well-constrained drill-ready target areas, which are up to 5km long and large enough to host significant potential gold deposits on its KGP Project15 km from Agnico’s Meliadine mine.

The Northwest Territories and Nunavut represent an outstanding exploration opportunity for major discoveries of a variety of minerals in a secure jurisdiction. The Northwest Territories government has several important infrastructure projects underway to improve access and logistics and continues to welcome mineral explorers. Diamond drillers, miners and other contractors have learned long ago how to cope with the extreme climatic conditions in the tundra.

Sixty North Gold Mining Ltd. [SXTY-CSE; SXNTF-OTC] offers a unique investment window on near term gold production at the past producing Mon Mine, which is located 40 kilometres north of Yellowknife, in the Canadian Northwest Territories. 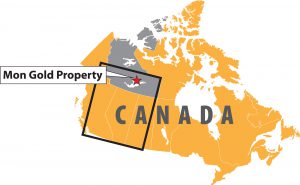 “We are a different kind of gold mining company in that we have a past producing gold mine that operated at 1 oz gold per tonne before shutting down in that late 1990s when the price of gold fell below US$300 an ounce,” said Sixty North President and CEO David Webb.

Basically, Webb and his team are hoping to pick up where they left off in 1997 by restarting production as early as this summer. Webb’s operating partner is Gerry Hess, the former Mon mine manager while Webb was the Chief Engineer and Chief Geologist at start-up.

The Mon Gold property consists of 11 contiguous mining leases and three mineral claims, consisting of 622 hectares, located in the South Mackenzie Mining District. The Mon Mine produced 15,000 ounces of gold from 15,000 tonnes of A-Zone ore between 1989 and 1997.

The project leases and claims are held by New Discovery Mines Ltd. (NDM), a private company owned and controlled by Webb.

Sixty North has an option to earn an 80% interest in the Mon Gold Project, subject to a 20% carried interest and a 2% net smelter returns royalty, by spending $6 million on the project prior to the end of April, 2021. 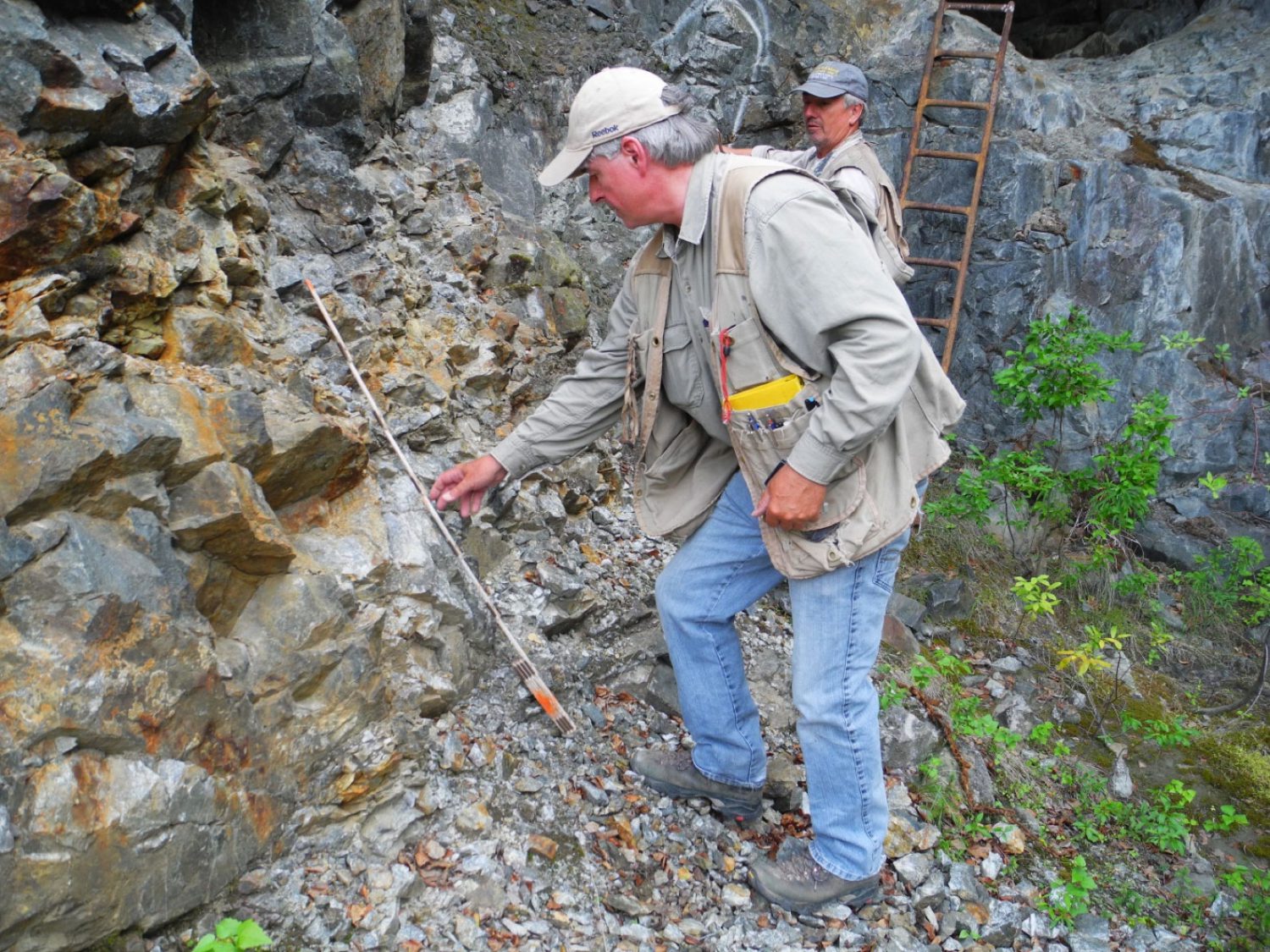 The company said drilling has confirmed that mineralization extends at depth below the old stopes. In addition, shear zone-hosted mineralization in multiple structures, some mineralized over 2 km, has been trenched at several locations on the Mon property. Trenching highlights include 7.22 g/t gold over 6.0 metres. The company said this mineralization is similar in nature to and hosted in the same rocks as the world class deposits at the Con and Giant mines in Yellowknife.

In addition, the company’s exploration led to discovery of a new 2,500 -metre long horizon hosting volcanogenic massive sulphide (VMS) mineralization on the Mon property enriched in silver, lead, zinc and gold. The VMS deposit has been trenched over a strike length of 120 metres, yielding results that include 203 g/t silver, 1.0 g/t gold and 1.55% combined lead and zinc over 0.45 metred.

A VTEM Plus geophysical survey designed to trace this discovery was completed and 3D inversions by Mira Geoscience Ltd. has clearly identified six additional larger and stronger conductive anomalies within the same strata, all of which are beneath lakes and swamps, the company said.  This has generated at least four drill targets.

The shear zone and VMS targets can be projected onto the adjacent Hangstone Property, which Sixty North has an option to acquire. Hangstone consists of 10 mineral claims that cover 2,394 hectares adjoining the Mon Property to the East and South. When the deal was announced in November, 2020, Sixty North said the substantial increase in size of the Mon Property covers extensions of known mineralized trends. 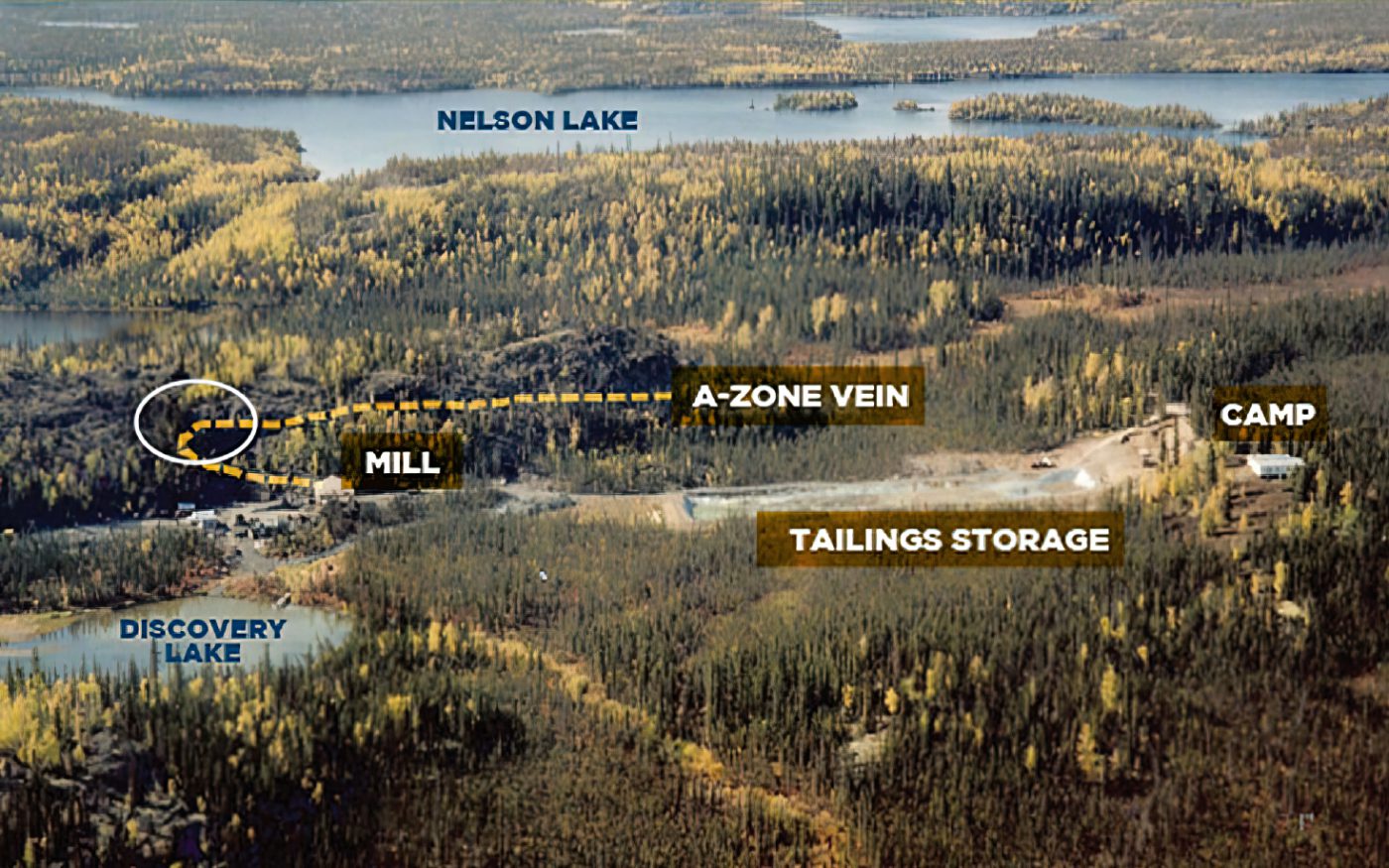 Under the agreement the vendors retain a 2% Net smelter royalty, half of which can be repurchased prior to the start of production for $1 million.

Mon is the only gold project in the Northwest Territories that is currently permitted for production. The company has permits which allow it to explore, mine and mill at a rate of 100 tonnes per day.

“The mine is the lowest risk because we have done it before. We know it’s there and we are going to do exactly what we did before,” Webb said.

It is expected that crews will be mobilized to the property to begin the underground ramp extension, accessing the gold-bearing quartz vein, and bulk sampling in the summer of 2021.

Personnel, food and materials are transported via a combination of float or ski-equipped aircraft and helicopters from the City of Yellowknife, a 15 to 20-minute flight. A winter road provides access for fuel and other heavy or bulky materials from Yellowknife via the Bluefish Hydro-Electric Dam, 20 kilometres south of the property.