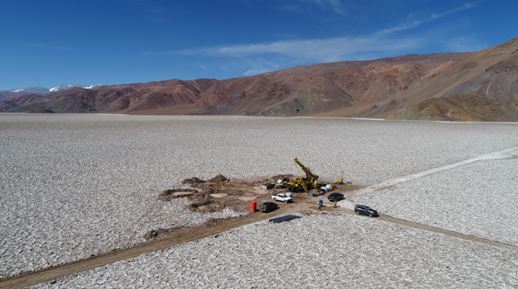 The improved economics of the project comes at an opportune time in the burgeoning lithium ion battery industry. Recent developments in the electric vehicle sector include solving the “range anxiety” challenge with better battery technology. This has now been bolstered by Tesla introducing its new semi tractor-trailer with a range of 800 km as well as delivering a giant battery to Australia to power a town of 30,000 people – the first time this has been possible.

Before these developments, global battery consumption was forecast to increase, on average, five times over the next 10 years. Today, lithium carbonate sells for over US $13,000/tonne for long term contracts and over US $20,000/tonne spot pricing in China.

These new advancements bode well for an increasing demand for lithium ion batteries – not just for electric vehicles but also for the growing consumer electronic device market. Neo Lithium is well positioned to participate in the increasing lithium ion battery demand with the construction of its lithium brine mining operation on the Puna Plateau at the southern end of the lithium Triangle in mining-friendly Catamarca Province.

Neo Lithium’s 3Q Project, which hosts one of the highest grade lithium deposits in the world, covers over 350 km2 with a salar (salt lake) of some 150 km2. The 16% CAPEX reduction decreased from US $588.7 million to US $490.2 million through the relocation of evaporation ponds, a cost savings of US $98.5 million. Updated economics are as follows: US $1.2 billion after-tax NPV at 8% discount rate, an Internal Rate of Return (IRR) of 27.9% and a payback period of one year and eight months.

When in commercial production, the mine will have an average steady-state production rate of 35,000 tonnes of lithium carbonate per year based on simple and proven solar evaporation technology. Starting with a three-year ramp up period commencing in 2021, the expected mine life is 20 years with a fully loaded operating cost of US $2,791/tonne of lithium carbonate.

The maiden resource estimate released on May 23, 2017 for the 3Q Project identified the following lithium carbonate resources: 1,339,546 tonnes of inferred resources at 713 mg/L and 714,242 tonnes of measured and indicated resources at 716 mg/L at a cut off of 520 mg/L lithium. At a cut off of 400 mg/L lithium, the 3Q Project hosts 2.23 million tonnes inferred resources and 1.22 million tonnes measured and indicated lithium carbonate equivalent with an average grade of 577 mg/L lithium. In addition, the resource has the lowest combined impurities of sulphate and magnesium of any known salar which directly translates into low cost operations.

Of note, 90% of the lithium resources are close to surface -100 metres in depth and above. However, the company has demonstrated there is a depth of 600 metres of potential brine-bearing sediments, which means resource can be increased and mine life could be significantly extended.

The current work program is fully permitted to feasibility. The current focus is on baseline studies and analysis for flora, fauna, limnology and microbiology for the summer, fall and winter has been completed. Social and archeology studies have also been completed. Soil, air, landscape and paleontology studies are expected to be completed shortly. These environmental studies are required to support the required full Environmental Impact Assessment (EIA) report, along with an economic study, to obtain a mine construction permit. The EIA report is expected to be delivered to the mining authorities in the first half of 2018 and is anticipated to be the final permit required before mine construction. An easement agreement has been granted for mine construction and road access to the site.

Neo Lithium will produce lithium carbonate with the extraction of brine through production wells. From the wells, the brine is pumped into large solar evaporation ponds where it will evaporate up to 6% Li concentration. From there, the 6% lithium brine will be transported to a processing plant to be built in the town of Fiambala, approximately 160 km from the 3Q project. Finally, the product is dried, classified and packed.

Neo Lithium Corp. represents an advanced-stage lithium brine project with attractive economics in a sector with an increasing demand for energy metals. The company has over $60 million in cash, no debt and 117.1 million shares outstanding.

While every effort has been made to ensure the accuracy of information contained in Resource World Magazine or on the ResourceWorld.com website, and the reliability of sources, the publisher in no way guarantees nor warrants the information and is not responsible for errors, omissions or forward looking statements made by advertisers.

Articles and advertisements in Resource World Magazine, are not solicitations to buy, hold or sell specific securities; they are for information purposes only.

Opinions and recommendations made by contributors or advertisers are not necessarily those of the publisher, its directors, officers or employees. Investors should be aware that risk is associated with any security, strategy or investment and are advised to seek the counsel of a competent investment advisor before making any investment, or utilizing any information contained in this publication.