Ophir Gold Corp. (TSXV: OPHR) (FSE: 80M) (OTCQB: KPZIF) (“Ophir” or the “Company“) is pleased to announce sample assays results for the first four (4) holes of the 2021 drill program at the Company’s flagship Breccia Gold Property (the “Property”). The Company holds an Option to earn 100% interest in the Property, which is located approximately 40 km southwest of Salmon, Idaho, and is accessible directly by road.

A total of 2,063.2 m (~6,769 ft) over ten (10) holes were completed as part of the program, which is now complete; crews have demobilized from site. The drill program targeted the Breccia Gold Zone, which is situated within the larger Meadows Fault Zone. Core sample assays for the first series of drill holes have been received and are reported herein for drill holes BG21-001, 002, 003A, and 004. Highlights include:

Company CEO Shawn Wescott commented: “We are very excited by sample assays from our initial series of drill holes from our maiden drill program at Breccia, as well as the textures and alteration we observed downhole. The drill results provide further support that we are in upper regions of a large low-sulphidation epithermal system, indicating considerable potential at depth and along strike. The high-grade hit in BG21-004 is precisely what we are chasing. We are very excited for follow-up drilling of this area in 2022.”

BG21-004 was the northernmost drill hole of the program; it returned the most well-mineralized intercept of the initial set of drill holes. The Breccia has been mapped over significant distance to the north where it is also coincident with a large Au-Sb in soil anomaly, as well as numerous surface rock gold occurrences. The results of BG21-004 (13.02 g/t Au and 46.6 g/t Ag over 7.4 m) suggest considerable potential to the north along the Meadows Fault Zone. This area of the Property is included in the drill plan submitted to the United States Forestry Service (USFS) for the Company’s five (5) year Plan of Operations which is anticipated to be approved for late spring / early summer 2022.

The gold mineralized intercept in BG21-001 – 3.23 g/t Au and 7.1 g/t Ag over 8.0 m – consists of a medium grey, variable clast sized breccia unit with fracture-controlled iron oxides. Narrow and vuggy quartz veins, ranging in size from 1 to 3 cm, along with bladed/drusy quartz iron and hematite infilling are also present. The interval also included a 57 cm vuggy quartz vein with hematite and manganese oxide infill that returned 40 g/t Au and 88.2 g/t Ag. This vein interval highlights the potential for high-grade at depth, and is similar to that found at surface (Photo 2).

This first series of drill holes all collared in the targeted breccia unit, which had initially been interpreted to reside further to the east. Further, the drilling to date has confirmed that the target breccia unit which crosses the Property is considerably wider than previously reported and extends a significant distance to the west of where it has been historically mapped (Figure 1). Although comparable mineralization was intersected in BG21-001 to that historically documented, the extent of the breccia suggests that the locations of the historically reported drill holes and mineralized intersections may be situated further west compared to the collared locations of BG21-001 to 004.

The drill holes completed to date by the Company at the Breccia Gold Zone have encountered significant clay alteration and occurrences of bladed and vuggy quartz, as well as wide zones of intense and heavily altered breccia with common quartz veining and negligible base metals. In addition, quartz veining and silicification are observed to increase with depth of the breccia zone intercepted in drill core as well as localized zones of propylitic alteration observed. Collectively these are characteristics consistent with the uppermost regions of a low-sulphidation epithermal system, and/or potentially related to an explosive diatreme breccia complex. The Company interprets the roots of the system have yet to be drill tested and are further encouraged by the magnitude of the brecciation, which is significantly larger than initially mapped (Figure 1), coupled with an increase of quartz veining at depth. In addition, results from drill holes BG21-001 through BG21-004 suggest significant potential to the north along the Meadows Fault Zone, which hosts numerous surface gold occurrences.

The Company has recently completed its final drill hole (BG21-009) of the program and, in accordance with its permit obligations upon the commencement of re-occurring snowfall, has completed the required program reclamation and demobilization of the drill equipment and crews from site. All drill core samples have been received by the analytical lab.

The Controlled Source Audio-frequency Magnetotelluric (CSAMT) survey over the Property has also recently been completed and a final interpretation of the dataset and report are expected to be received in the next couple of weeks.

The Company has submitted a five-year Plan of Operations to the United States Forestry Service for extended exploration of the Breccia Gold Property (see news release dated May 17, 2021). The permit, once received, will allow the Company to explore the Property for five consecutive years, under the same authorization, providing significant advantages and flexibility for follow-up aggressive and expanded diamond drilling on the Property in 2022. Coupled with the CSMAT data, the Company intends to continue delineating the near-surface breccia unit with significant more flexibility on pad locations, as well as targeting the roots of the system where silicification and quartz stockwork veining, associated with gold mineralization, are anticipated to be ‘mapped’ by the CSAMT survey.

A Quality Assurance / Quality Control protocol following industry best practices was incorporated into the program and included systematic insertion of quartz blanks and certified reference materials into sample batches, as well as collection of quarter-core duplicates, at a rate of approximately 5%. Drill holes BG21-001, 002, 003A, and 004 were sampled in their entirety and core samples shipped to Activation Laboratories in Kamloops, BC for analysis. No samples were collected from drill hole BG21-003 as was lost due to drilling conditions and recollared as BG21-003A.

Core samples were submitted for multi-element analysis, including silver, with ICP-OES finish (code 1F2), as well as gold by fire assay (gold 1A2B30). Over limits for gold (>10 g/t) were automatically determined by gravimetric. Standard drill core sample preparation was completed and comprised of crushing to 80% passing 10 mesh, followed by a 250 g riffle split and pulverizing to 95% passing 105 µ (package RX1). 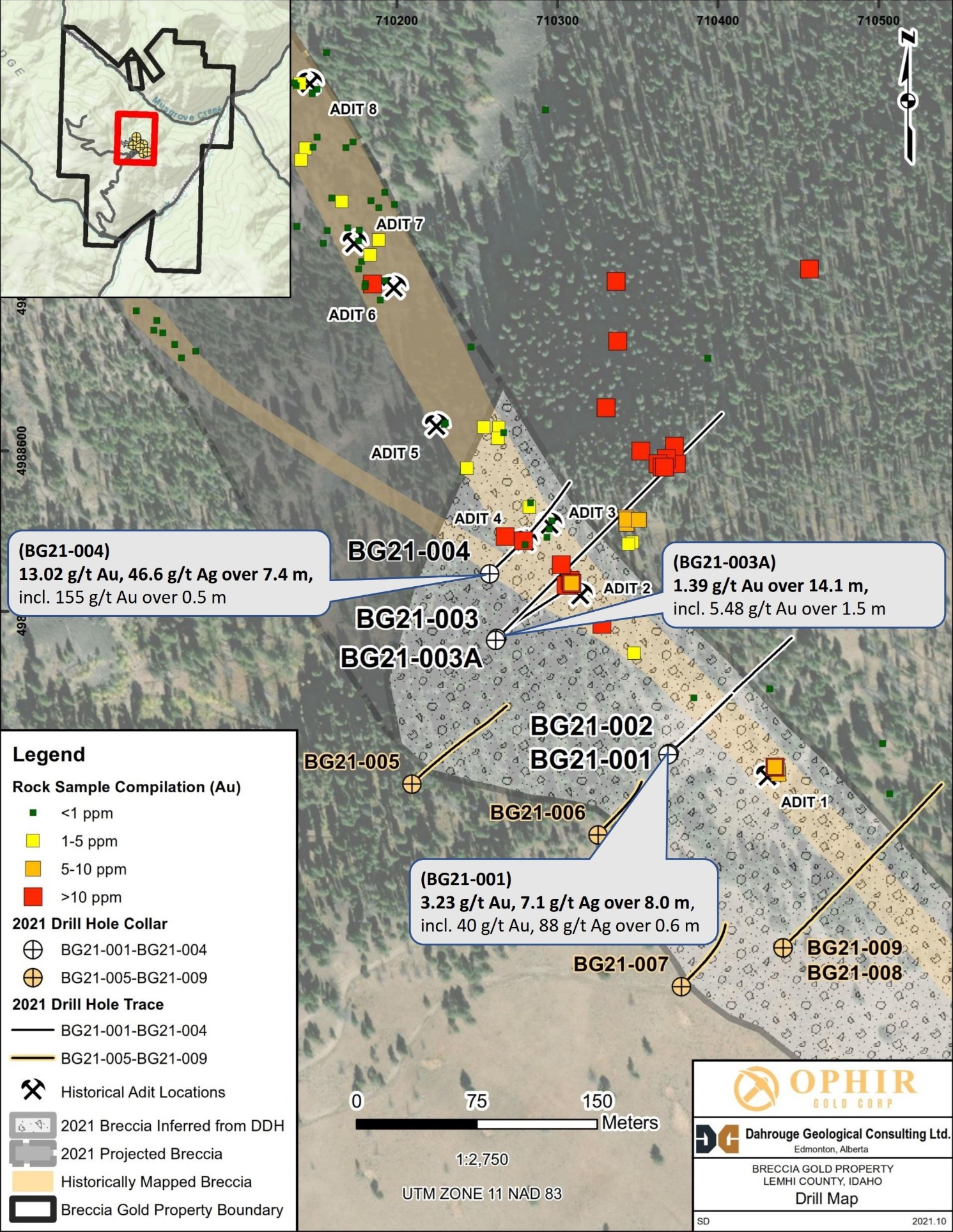 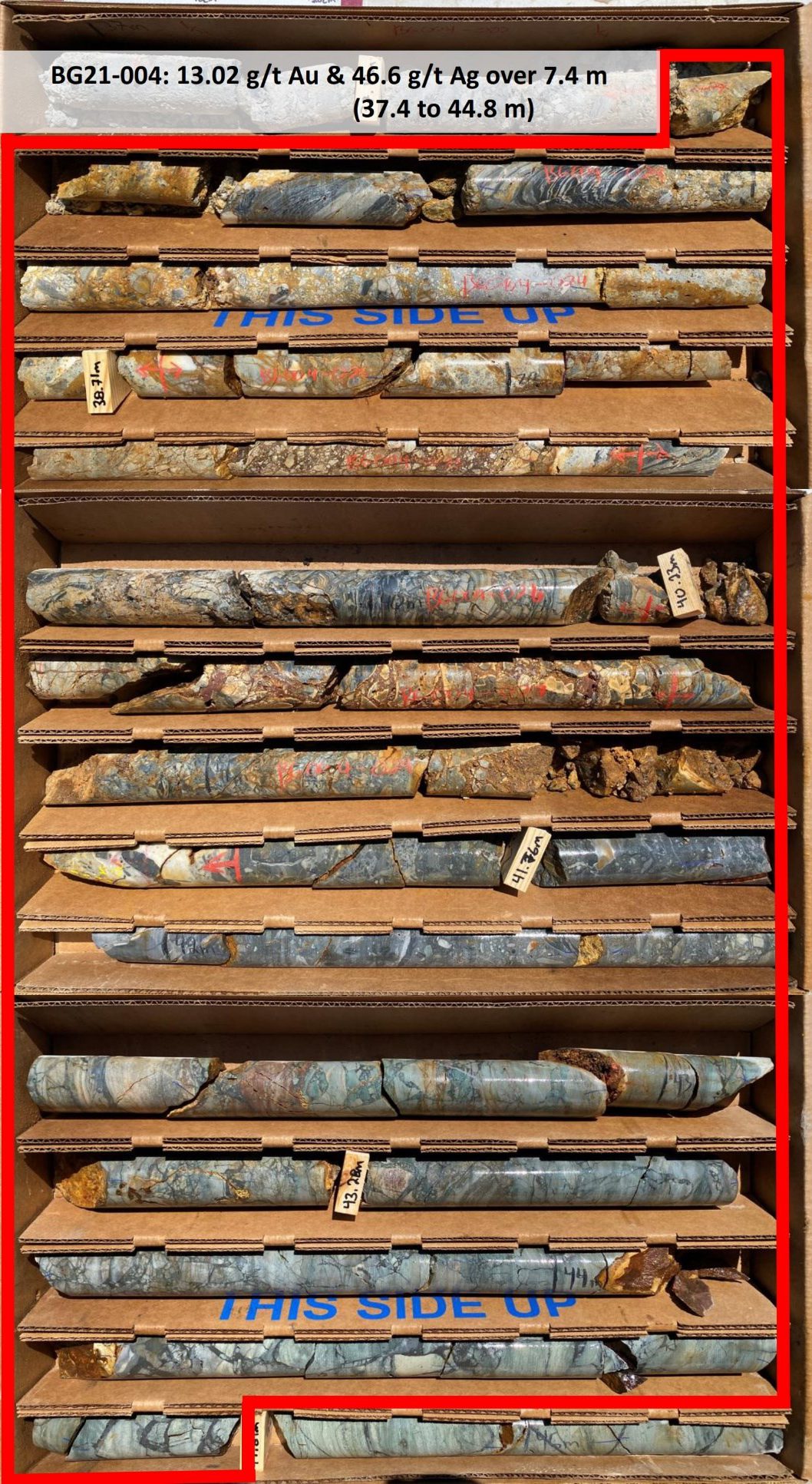 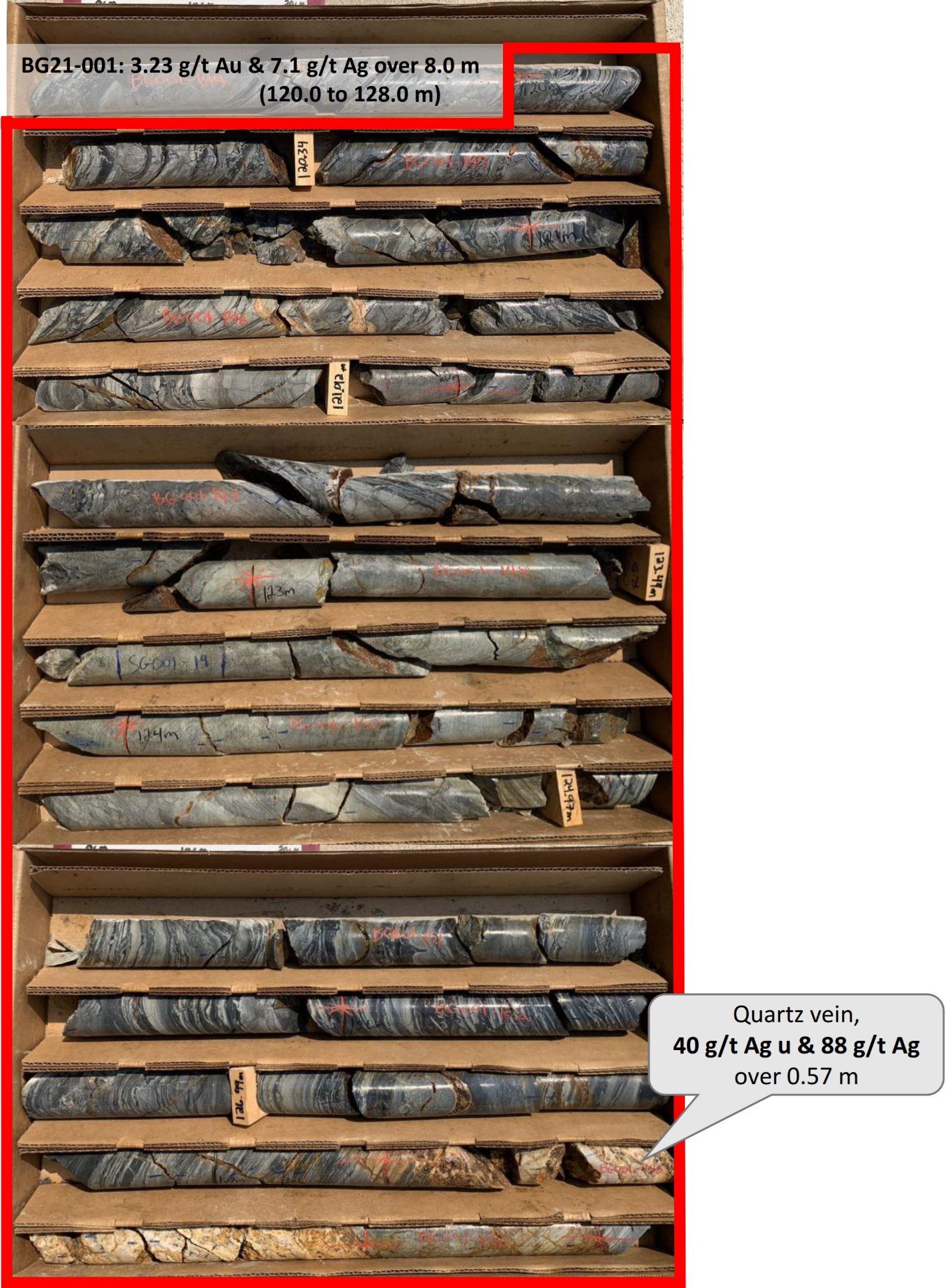 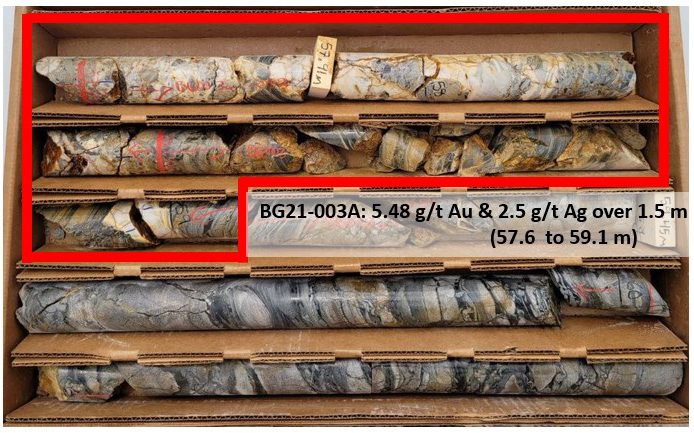 Darren L. Smith, M.Sc., P. Geo., Director and Vice President of Exploration for the Company, and Qualified Person as defined by NI 43-101, supervised the preparation of the technical information in this news release.

About the Breccia Gold Property

The Breccia Gold Property consists of 102 claims covering approximately 1,836 acres (743 ha) within the Blackbird Mining District, in Lemhi County, approximately 40 kilometres southwest of Salmon, Idaho, USA. The Property is accessible by paved highway and a network of well-maintained gravel roads and is host to the historical Gahsmith Gold Mine. Exploration and development activity on the Property dates back to the 1930’s and has been exploited by at least eight adits, with several thousand tons of mineralized quartz veined material extracted. In the 1980s, a bulk sample of 4,621 tons was completed with an average grade of 0.335 oz/t Au reported. The current Property includes the Meadows Fault Zone and the lesser explored, parallel Musgrove Mine Trend. Recent exploration carried out in 2018, 2019, and 2020 included the remapping and sampling of the Meadows Fault Zone and the results are suggestive of the existence of a significant low-sulfidation, epithermal gold system. Surface results include 57.6 g/t Au and 19.6 g/t Ag in outcrop, and 69 g/t Au and 27.5 g/t Ag in float.

Ophir Gold Corp. is a gold exploration company focused on the exploration and development of its flagship property, the past producing Breccia Gold Property located in Lemhi County, Idaho. The Company has an option to earn a 100% interest in the Property over a three-year period from Canagold Resources Ltd. (formerly Canarc Resource Corp.) and DG Resource Management Ltd.