The price of copper crashed in March this year following the global reaction to the outbreak of the coronavirus pandemic falling from around US$2.60/lb to just above US$2.00/lb over a one-week period. But it has since bounced back surprisingly well reaching a two-year high of just under US$3.00/lb this month on the back of resurging Chinese demand and supply disruptions. Demand is now outstripping supply reflected in a decline in treatment and refining charges. Treatment and refining charges paid by miners to smelters have fallen to an eight-year low, a sign of competition between refiners for available concentrates. 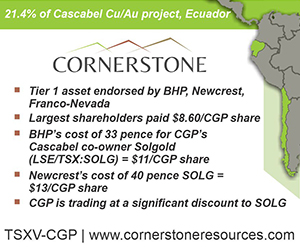 But the recovery may not be sustainable and the risk of a second Covid-19 wave — especially in the U.S. and China, the world’s two biggest consumers — may force downward pressure on copper prices during the coming quarter

The pandemic caused of thousands of workers in the Chilean copper industry to fall ill resulting in a marked drop in output from Chile, the world’s largest copper producer accounting for over a quarter of global supply. Many mines in South America reduced their labour force and postponed non-essential activities in an attempt to keep workers safe and as a result the world’s No. 2 producer Peru suffered a 40% fall in output in May.

Eleni Joannides, principal analyst in Wood Mackenzie’s copper team, recently told CNBC that the consultancy was forecasting stronger demand for copper in the second half of this year as economies and industries restarted. However, she noted that question marks remained around the degree to which the economy would bounce back before the end of 2020:

“There’s a whole slew of the population out there that is either furloughed, is losing their job or doesn’t know what’s going to happen to their job, so the risk is that they’re not going to be going out into the market buying some of the big ticket items that contain copper, so there’s a concern that whilst demand should, in theory, pick up, it may not pick up to the degree that we expect because people aren’t going to go out there and buy a new car or a new washing machine.”

Jonathan Barnes, senior copper analyst at Roskill, believes that copper prices will be influenced by continued pressure on supply in the coming quarters. In a recent phone call with CNBC he said it was “almost inevitable” that copper markets would continue to see more disruptions to production this year. The pandemic’s impact on production of newly-mined material was “just grazing the surface,” he added.

Barnes went on to say that secondary copper, particularly copper scrap — which makes up one third of the overall market — had been hit even harder by the crisis, estimating that global trade of copper scrap had fallen by around 30% in the first half of 2020. And China, which makes up around half of global demand for copper, had boosted imports of copper cathode in order to make up for a shortage of scrap metal.

“What this points to is a big cathode-replacing-scrap effect in the overall market, and this is really, I think, one of the main reasons why we’ve seen this unexpectedly quick recovery in the copper price, particularly for the past month. I think for the balance of this year, it’s very likely that we’ll continue to see an upward movement in the copper price. Of course, if we see the second wave of Covid-19, all bets might be off.”

Meanwhile, in China, which has carried out an environmental campaign against foreign garbage in recent years, progressively restricting scrap inflows and planning a ban on all solid waste imports by the end of 2020, the State Administration for Market Regulation (SAMR) published new standards for “recycled” copper in January after the metals industry successfully lobbied for high-grade scrap to be reclassified as a resource instead of waste, meaning it would not be affected by the ban. But only days before the new system was due to take effect on July 1, China had not yet released the customs codes for the materials, leaving foreign and Chinese firms abroad unable to send cargoes and denying China’s manufacturing sector a key source of supply. This could mean that the country will continue aggressively buying copper concentrates as well as copper cathode.

But copper price rises could be limited if copper scrap supply bounces back and Beijing eventually allows some scrap to be imported.