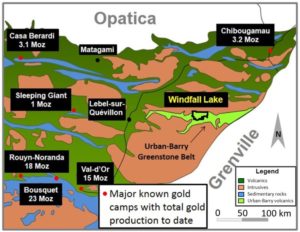 The 800,000-metre drill program combines definition, expansion and exploration drilling in and around the main Windfall gold deposit and the adjacent Lynx deposit, which is located immediately north of Windfall.

Significant new analytical results from 52 intercepts in 40 drill holes are presented below. They focused on infill, and expansion in the Underdog, Caribou, Zone 27 and Mallard corridors of the Windfall deposit.

The bulk of the mineralization occurs in the Main Zone, a southwest-northeast trending zone of stacked mineralized lenses, measuring approximately 600 metres wide and at least 1,400 metres in length. The deposit is well defined from surface to a depth of 500 metres, and remains open along strike and at depth.

Osisko also holds interests and options in a number of additional properties in northern Quebec and Ontario, including the Marban Project located in the heart of Quebec’s Abitibi gold mining district. The company continues to be well financed with approximately $220 million in cash and investments.

Osisko is one of the most active companies in the Windfall Lake camp. Back in August, when the company said it was expanding the program to 800,000 metres, it had 24 drills working on site, producing approximately 40,000 metres per month.

New exploration drilling is also planned for 2018 in the northeast and southwest Windfall/Lynx trend and to explore the recently defined geological structure known as the Bank Fault.