The purpose of the pre-concentrating test work is to evaluate potential, near-pit cost saving measures related to transportation and processing of mineralized material to a projected mill. Salient results are summarized below:

* Mass pull is a measure of the weight percentage of material mass recovered from the pre-concentration test, hence the smaller the number the higher the savings in transportation costs and processing volume to the projected mill.

Results indicate similar recoveries for both processes, but XRT is the preferred process as the end product is expected to be dry and easier to handle in northern weather conditions. Furthermore, machinery necessary for near-pit XRT sorting is also more mobile than DMS equipment, providing more operational flexibility to the future operation.

Jeff Hussey, P. Geo., Osisko Metals President and CEO, stated: “This round of test work expands upon previous material sorting studies and conclusively confirms Pine Point material is amenable to XRT pre-concentration. Indications are that roughly half of the waste rock material can be rejected near potential pit operations with less than 10 percent loss of both zinc and lead mineralization. The benefits of incorporating a pre-concentration process at Pine Point would be to significantly reduce haulage costs and reduce the material throughput in the mill. Based on the combination of these benefits, project economics would improve from substantial operating and capital cost savings.”

Mr. Hussey continued: “One of the key benefits of the Pine Point project is the proven high metal recoveries using conventional flotation. Historical results from the Cominco Ltd. era highlight that there is negligible deleterious elemental content and high recoveries for both the zinc and lead concentrates. We believe Osisko Metals is well positioned to leverage both this excellent response to preconcentration techniques and the premium quality of potential production of Pine Point concentrates.”

Two pre-concentration processes were evaluated: X-Ray Transmission material sorting and Dense Media Separation. The two processes rely on the significant density contrast between the sulphide material, composed of sphalerite and galena, and the barren dolomitic limestone waste rock. XRT is a dry process (opposed to the “wet” process of DMS) whereby crushed material is fed along a wide conveyor belt, analyzed by X-Ray to sort the materials before air jets are deployed to reject waste rock particles. DMS uses a liquid with a set density to separate sulphide material, which sinks, from waste material which floats on the liquid. Both processes greatly reduce the material to be handled and processed in the concentrator following pre-concentration, either method could further improve future project economics and operational benefits.

The pre-concentration test work was performed on a composited total of 800kg of representative Pine Point mineralized drill core samples from the summer 2017 and winter 2018 drilling campaign. Four separate head samples were prepared from this material and are listed below:

Metal recovery and mass pull were strongly linked to head grade in both the XRT and DMS results (summarized in the charts below). 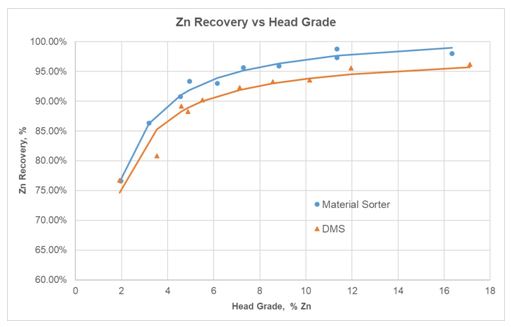 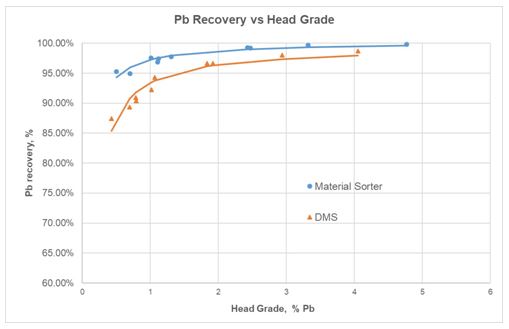 The material was prepared by hand in order to have a particle size range between -60mm and +10mm. Coarser particles were broken using a hammer and finer particles were removed using screens and stored.

The material sorter test work was performed at Steinert’s testing facility in Kentucky, USA. Several sensors were tested to investigate which technology would have the best response to Pine Point material. X-ray transmission sensors, which measure the density of the sample, were the most efficient at sorting mineralized material from barren host rock. If particles have a density that resembles limestone, they are rejected. The “mass pull” is the percentage of feed material that is recovered, or having a density that is typical of sulphide mineralization.

The XRT material sorter sample material was recombined with the fines before it was split. Half was sent for flotation test work and the other half was shipped to SGS laboratory in Lakefield for the Dense Media Separation test work. A dense media liquid with a density of 2.9 grams per cubic centimeter was used for the DMS test work.

One “rougher” or first float phase kinetic test was performed on each of the fourteen XRT Material Sorter concentrates to confirm that similar metal recoveries can be achieved as those listed in the historical records. The results from the test work have been partially received and are encouraging. Optimization results will be available shortly, and a complete flotation test work campaign is planned later this year to optimize recovery and operating parameters that would be closer to a full-scale concentrator performance forecast.

Osisko Metals is a Canadian exploration and development company creating value in the base metal space with a focus on zinc mineral assets. The Company controls Canada’s two premier historical zinc mining camps: The Pine Point Mining Camp (“PPMC”), located on the south shore of Great Slave Lake in the Northwest Territories, near established infrastructure, paved highway access and with 100 kilometres of mine haulage roads and power substation already in place. The PPMC currently hosts a NI43-101 Inferred Mineral Resource of 38.4 Mt grading 4.58% zinc and 1.85% lead, making it the largest near-surface, pit-constrained zinc deposit in Canada (please refer to the SEDAR-filed Amended Technical Report for further information). The 2018-2019 drill holes, once fully assayed, will be incorporated into the database with the objective of issuing a new resource estimate in H2 2019. The Bathurst Mining Camp (“BMC”), located in northern New Brunswick, with NI43-101 Indicated Mineral Resources of 1.96 Mt grading 5.77% zinc, 2.38% lead, 0.22% copper and 68.9g/t silver (9.00% ZnEq) and Inferred Mineral Resources of 3.85 Mt grading 5.34% zinc, 1.49% lead, 0.32% copper and 47.7 g/t silver (7.96% ZnEq) in the Key Anacon and Gilmour South deposits. In Québec, the Company owns 42,000 hectares that cover 12 grass-root Zinc targets that will be selectively advanced through exploration in 2019.

Metallurgical testing and analyses were performed at Steinert US Inc. in Walton Kentucky, SGS Mineral Services in Burnaby, British-Columbia and SGS Lakefield in Ontario, Canada. The QA/QC program utilized is consistent with NI 43-101 and industry best practice standards. This news release was reviewed and approved by Mr. Laroche and Mr. Clemmer.

Neither the TSX Venture Exchange nor its Regulation Services Provider (as that term is defined in the policies of the TSX Venture Exchange) accepts responsibility for the adequacy or accuracy of this news release. No stock exchange, securities commission or other regulatory authority has approved or disapproved the information contained herein.