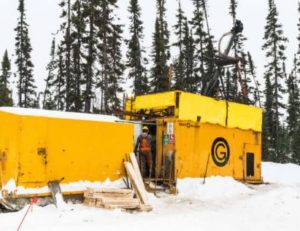 Osisko Mining Inc. [OSK-TSX; OBNNF-OTC] said Thursday August 16 that it has struck a deal with an underwriting syndicate to raise $68 million through a bought deal private placement of flow-through shares.

News of the financing deal comes after Osisko said it will acquire all of the remaining shares of Canadian explorer Beaufield Resources Inc. [BFD-TSXV], which owns a portfolio of projects throughout Ontario and Quebec, including the Urban-Windfall Project that is adjacent to Osisko’s Windfall/Lynx Project.

On Thursday, Osisko said it has entered into an arrangement with a syndicate of underwriters led by Canaccord Genuity Corp., and including Haywood Securities Inc., Macquarie Capital Markets Canada Ltd. and National Bank Financial Inc., in connection with a brought deal private placement financing of 26.2 million common shares that will qualify as flow-through shares.

The flow-through shares will be issued in two tranches.

Tranche one will consist of 14,035,088 flow-through shares to be issued at $2.85 per share to residents of Quebec, generating proceeds of $40 million.

Tranche two will consist of 12,141,383 flow-through shares to be issued at $2.30 a share to residents outside of Quebec, generating a further $28 million.

Gross proceeds from the placement will be used by the company to incur eligible Canadian exploration expenses that will qualify as flow-through mining expenditures.

Osisko is a mineral exploration company with a focus on precious metals in Canada.

The portfolio includes a 100% stake in the high-grade Windfall gold deposit located between Val-d’Or and Chibougamau, Quebec. It also holds a 100% undivided interest in a large area of claims surrounding the Urban Barry and nearby Quevillon regions (over 3,300 km2), and a 100% interest in the Marban Project located in the heart of Quebec’s prolific Abitibi gold mining district.

Results disclosed by Osisko since March 5, 2018 (representing 131 drill holes and approximately 40,000 metres of infill and extension holes principally in the Lynx and Underdog zones) were not incorporated in this mineral resource estimate.