The market outlook for 2016 presents significant challenges and opportunities that we have not seen for 40 years.

Since I began work on creating our first bullion fund in 1998, I have generally restricted my commentary to using precious metals for strategic portfolio allocation. Everyone agrees that investment portfolios should be diversified. Since gold is the most non-correlated asset class to traditional financial assets it provides important portfolio diversification. A strategic allocation of at least 10 percent reduces portfolio risk and improves returns over the long term.

This year I’d like to discuss a tactical opportunity, a market disparity that exists because of an artificial low in the gold price, and an unsustainable high in financial assets. Everybody understands buy low and sell high. The opportunity for 2016 is to sell high, buy low.

What is Driving Stocks? 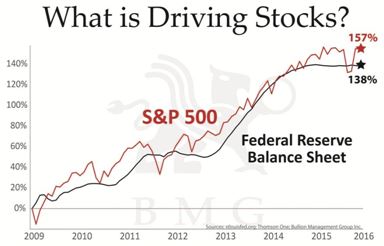 Many Canadians have profited by investing in U.S. equities since 2009 and, since 2011, they have also received a 32 percent bonus, because the Canadian dollar declined against the U.S. dollar. However, this rise in equities was largely a result of the U.S. Federal Reserve increasing its balance sheet.

The monetary policy of low interest rates resulted in trillions of dollars in stock buy-backs and mergers, using low-cost borrowed money. These monetary policies on the part of the world’s central banks have caused bubbles in stocks, bonds, real estate, art, and exotic cars. These are not likely to continue higher in 2016, and the risk of a major correction looms. In 2000, we had the tech sell-off that no one expected. Eight years later, we had the subprime sell-off that no one expected. In 2016, another eight years later, we will likely have an equity sell-off as global economies contract, and geopolitical tensions rise.

While it is clear that the global economy is contracting and there are numerous vulnerabilities, several valuation methodologies summarize current market fundamentals and provide an excellent indicator of future trends. They are the Buffet Indicator, the Shiller PE Ratio, and the Tobin Q Ratio. 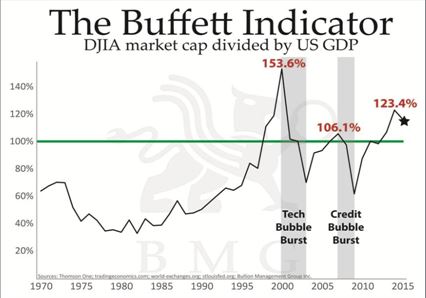 The Buffett Indicator uses the total market capitalization of U.S. equities divided by GDP. The only other times the Buffett ratio exceeded 100 was just prior to the tech crash in 2000, and the credit bubble in 2008. 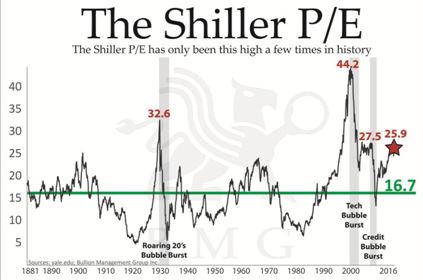 The Shiller PE is a popular indicator of stock valuation. The 134-year average P/E ratio is 16.7, whereas the current ratio is 25.9, or 55 percent overvalued. The ratio has only been this high on three other occasions: 1929, 1999, and 2007. Each time it happened, stocks dropped by over 50 percent, and didn’t recover for years. 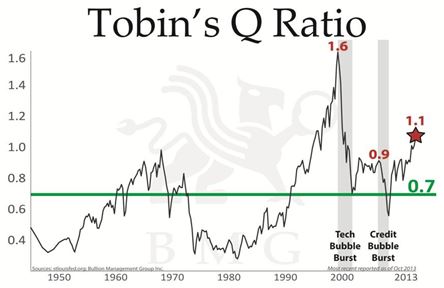 The Tobin Q ratio, which measures market value versus replacement cost, is considered one of the better long-term indicators of a pending market decline. The current Tobin Q ratio exceeds the 70-year average of 0.7 by 58 percent. The ratio rose above the average in 2000 and 2008. 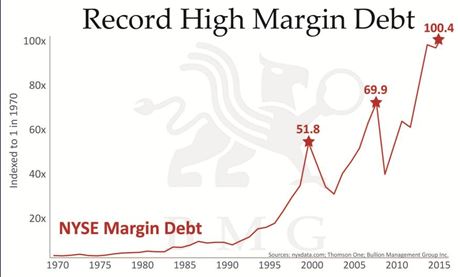 This time, however, the correction could be much worse than in either 2000 or 2008. Not only do we have a significant overvaluation, but historically high margin debt will accelerate the decline due to margin calls. These conditions provide investors with the opportunity to sell high and take a profit.

The “Buy Low” opportunity exists because gold has been in a cyclical correction for 3 years, and seems to have formed a bottom.

Gold’s strong fundamentals point to a bright future; and of course gold has always protected portfolios during market declines. 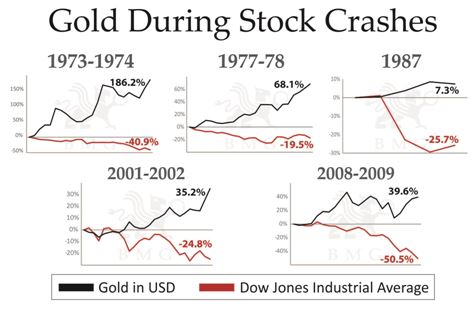 The future outlook for gold pricing is not complete without understanding the implications that China will have. China has been increasing its gold reserves, and has made a number of strategic moves that threaten the U.S. dollar’s reserve currency status.

In 2015, the result of these changes was already showing, as 71 percent of U.S. Treasuries were purchased by the Federal Reserve with newly issued currency as demand for US dollars decreased.

Finally, to reinforce the “Buy Low” opportunity, a comparison to the cyclical gold correction from 1974 to 1976 and the subsequent price rise serves as a good example.

At that time, after a 445% rise from 1971 gold declined 45%, gold sentiment was at record lows, and the media was full of negative gold commentary, as it is today. On March 26, 1976, the New York Times stated: “For the moment at least, the gold party seems to be over.” It also quoted a Citibank letter that declared, “Gold was an inflation hedge in the early 1970s, but money is now a gold-price hedge.” It suggested that the rout was due to the “victorious dollar,” the “victorious dollar” that has lost 80 percent of its purchasing power against gold since that day in 1976.

After two years of declines, many investors sold their gold holdings and vowed never to invest in gold again. However, in the fall of 1976, gold began an ascent that saw it rise 750 percent, peaking at $850 an ounce three years and four months later. After a 3-year correction, the same opportunity to buy low exists today, just as it did in 1976. Of course, conditions were different then: the stock market was not in a bubble, and total US debt was $800 billion – less than last year’s annual deficit.

I am often asked how high will the price of gold go, and do I still think it will hit $10,000 per ounce, as described in my book. The conditions detailed in my book are still very much in place, and many of the vulnerabilities have actually increased.

A lock-step relationship has existed between gold and U.S. debt for most of U.S. history. If the U.S. debt continues to increase at the same rate as the last ten years, then it will reach $26 trillion by 2020. This is a good indicator for a gold price of at least $2,500 per ounce in the near future.

How high will gold go? 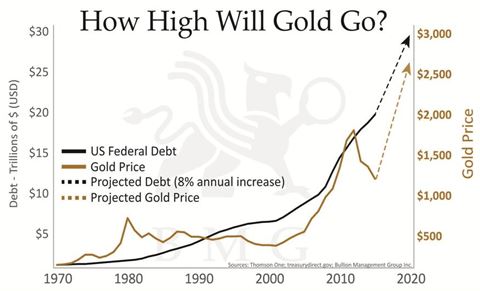