Every now and then, a precious metals mineral exploration company comes along that checks all the boxes for savvy resource investors–an experienced management team with a proven track record, a mix of advanced and grassroots projects located in safe jurisdictions, well-funded exploration programs generating continuous news flow, and a successful promotion machine to get the word out. 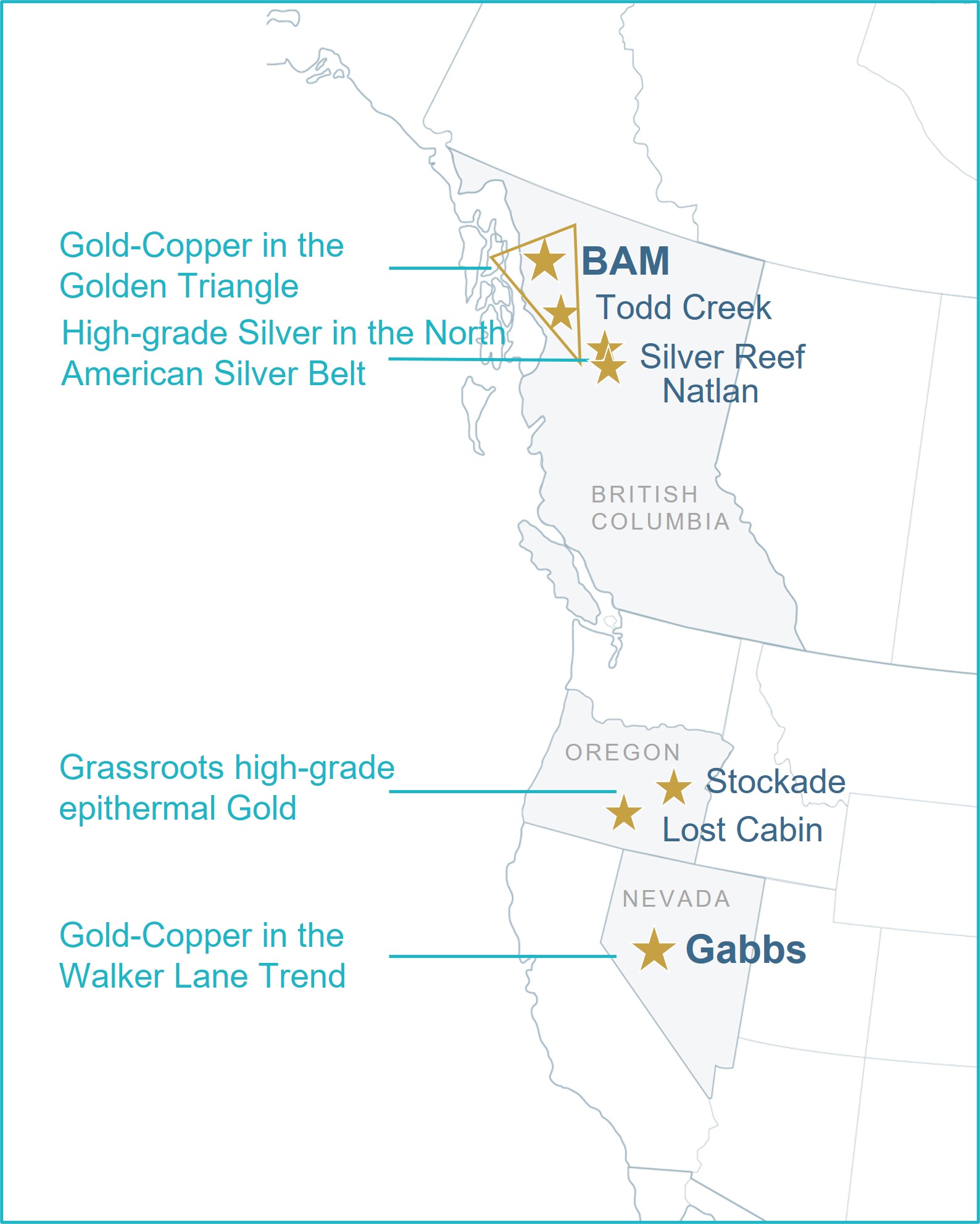 Â Â Â Â Â Â Â Â  P2 Gold Inc. (TSX-V: PGLD) was born out of Central Timmins Exploration Corp in 2020 and is led by Joseph Ovsenek, best known for his tenures in senior management roles with Sliver Standard Resources (now SSR Mining, TSX: SSRM) and Pretium Resources Inc (TSX: PVG) where he is credited for leading the team that brought the Brucejack Mine into operation.

Soon after taking the helm as Chief Executive Officer of Central Timmons Gold, Ovsenek focused his efforts on restructuring the company and acquiring a portfolio of prospective properties, both advanced stage and grassroots, in familiar, safe jurisdictions. After an extensive search he landed back in the familiar territory of Northwest British Columbia’s Golden Triangle with three properties, Southwest Oregon with two properties, and in early 2021, once the gold price normalized, with an advanced-stage gold-copper project in Nevada.

Still, while getting all the corporate ducks in a row, Ovsenek knew from his experience inpatient resource investors expect results and quick return on their investments. So by July 2020, he’d raised C$2.5 million in flow through dollars, completed a private placement for C$2.3 million, and had three exploration programs underway. The exploration programs included a 1,315-metre drill program on the Silver Reef property north of Hazelton, British Columbia, another 1,027-metre program on the Todd Creek property, bordering the east side of Pretium Resources’ Bowser Claims in the Golden Triangle, and airborne geophysics, soil sampling, mapping and ground geophysics on the BAM property which is about 150 kilometers northwest of Stewart, British Columbia.

By October 2020, less than a year after the company’s renaissance, the results from the exploration programs started to roll in.Â  The soil geochemical sampling identified a gold anomaly almost 3.6 kilometers long on the BAM property, drilling at Todd Creek identified high-grade copper, and the surface sampling at Silver Reef had come back ranging in values up to 3.21 g/t gold and 3,885 g/t silver.

Early investors were rewarded handsomely after P2 Gold’s stock price rose to a high, averaging $0.50 a share on the exploration news flow from the $0.10 share price at the beginning of 2020. The share price settling at $0.30 by the close of the year, but there was still more news to come.

Hunting for elephants in Nevada

While the rest of us rang in the New Year popping champagne corks, the P2 Gold management team was out looking for an advanced stage project to round out the company’s portfolio.

“At the beginning of 2021, with the shine coming off gold, the price of the projects we had looked at in 2020 were getting a little more realistic, and in February 2021, we signed a deal with Borealis Mining Company, an indirect, wholly owned subsidiary of Waterton Precious Metals Fund to purchase the Gabbs property located in the Fairplay Mining District of Nye County, Nevada. It’s a property we had looked at for a long time, mostly because of its gold and overlooked copper potential,” says Ovsenek.

To acquire the Gabbs Project, P2 Gold paid US$1 million to Waterton Precious Metals Fund and issued 15 million shares in its capital to Waterton. In addition, the company will pay to Waterton Nevada Splitter LLC US$4 million on the 12-month anniversary of closing and US$5 million on the earlier of the announcement of the results of a Preliminary Economic Assessment and the 24-month anniversary of closing. Borealis has reserved for itself a 2% net smelter returns royalty on production from the Gabbs Project, of which one percent can be repurchased at any time by P2 Gold for US$1.5 million and the remaining one percent of which can be repurchased for US$5 million. 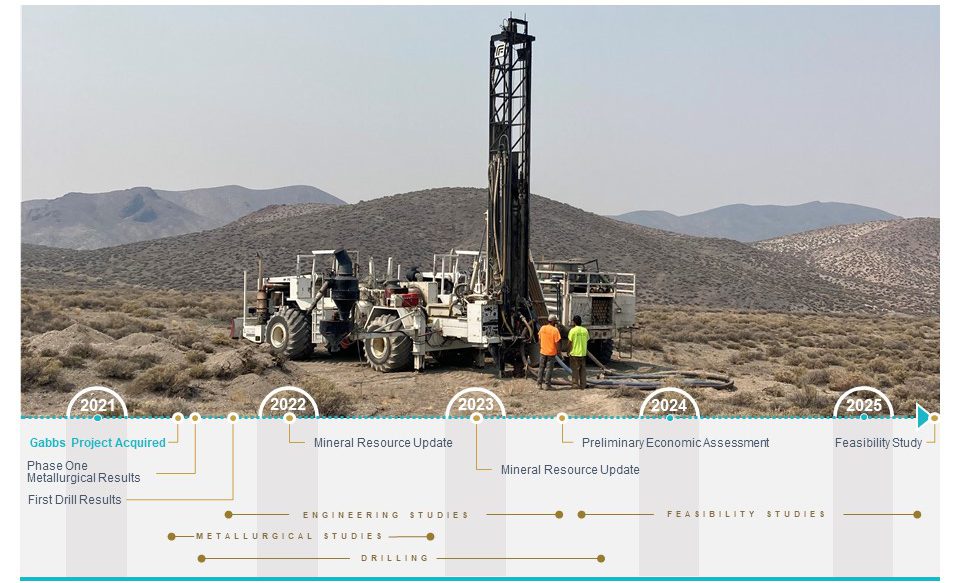 With the completion of the transaction and through a private placement, Waterton owned approximately 27% of the issued and outstanding shares of P2 Gold.

The Gabbs Project has been through several hands over the years and has a 43-101-compliant Inferred Mineral Resource of 1.84 million ounces of Gold Equivalent or 1.26 million ounces of gold and 422.3 million pounds of copper (73.1 million tonnes grading 0.54 g/t gold and 0.26% copper). Yet up to now, the project was always viewed as a potential heap leach gold operation and considered uneconomic, as the cost of leaching the copper was not feasible in the former price environment. But in 2021, with copper prices hitting $9,500 per tonne in Q2 and the demand for copper expected to increase as the green economy grows and matures, the economics of Gabbs begins to look much better.

“We look at gold as a hedge against inflation and a store of wealth, and then on the other side copper as the metal that will drive the growth of the green economy, so the mix of gold and copper together is a great thing,” says Ovsenek.

Ovsenek and his team were also encouraged when they looked at the historical drill data, which includes 494 historical drill holes over four deposits, Sullivan, Lucky Strike, Car Body and Gold Ledge, with most of the drilling done on Sullivan.Â  Almost 40 percent of the holes drilled were shallow and ended in mineralization.

The Gabbs acquisition landed well with investors, also. P2 Gold closed a private placement for $5.949 million to fund the Gabbs acquisition and fund an initial exploration program. The program included an induced polarization (IP) geophysical survey over the Sullivan Zone to develop a signature profile of the known mineralization and to highlight any potential extensions of the mineralization; a satellite hyperspectral alteration survey over the property to assist with regional mapping and identify sources of known surface mineralization; and a drill program to better delineate the mineral resource.

The drill program began in July 2021 and includes almost 7,000 metres of reverse circulation drilling and 600 metres of diamond drilling to help confirm the geological model of the Sullivan and Car Body zones.

In August 2021, P2 Gold confirmed that viable options for the recovery of copper from the oxide mineralization exist at Gabbs.Â  The metallurgical program included testing for potential recoveries of copper and gold from oxide mineralization by using heap leach and conventional milling. The test work showed that gold and copper can be recovered by both process options, with extractions averaging 97.2% for gold and 95.2% for copper using conventional milling and grinding the sample to 100 microns. Â This is important because P2 Gold believes the oxide copper, approximately 143.3 million pounds not included in the Gabbs Inferred Mineral Resource, could now be included in future estimates of the Mineral Resource and considered for recovery in the Preliminary Economic Assessment planned for 2022/23.

The metallurgical result was the news investors were waiting for, and P2 Gold’s stock price almost doubled overnight to $0.62 cents after the release.

The next step, according to Ovsenek, is to look at the Gabbs property holistically with a view to how best to recover both the copper and gold, so P2 Gold is currently completing a trade-off study to determine the most economical process.

“The factor leading in favour of a milling process is that the recoveries for both copper and gold are in the high 90th percentile, while heap leaching recoveries would be in the 75 to 80 percent range, and that’s a lot of metal we would be leaving in the ground. Â But once we have the trade-off study it will determine how we move forward,” says Ovsenek.

“We were confident the hole would net good results because of the historical data, but the width and assays exceeded our expectations. We are very positive about this property. Currently, the Inferred Mineral Resource is 1.84 million ounces of gold-equivalent, and we are confident we can get this up to 4 to 5 million ounces gold-equivalent just by drilling in known zones, and there is also plenty of upside opportunity for expansion on new zones over the 33- kilometer area of the property,” says Ovsenek.

There’s still lots of news to come on Gabbs. The reverse drilling is ongoing and assay results are expected to trickle in through the new year (2022).

The Biggest Discovery in the Golden Triangle this Year

While work was underway at the Gabbs project, drills were also turning on the BAM Property in northwest British Columbia, where a six-hole, 836-metre drill program tested the Monarch Gold Zone (BAM-001,002,003, and 005) and the Jan Copper zone (BAM-004 and 006).

The news again rewarded investors with P2 Gold’s stock price climbing to $0.50 on the release of the BAM drilling results, and from the general market excitement that a grassroots project may have identified a new major gold anomaly, “the things that fortunes in resource investing are made of,” says Robert Moriarty in his book Basic Investing in Resource Stocks. 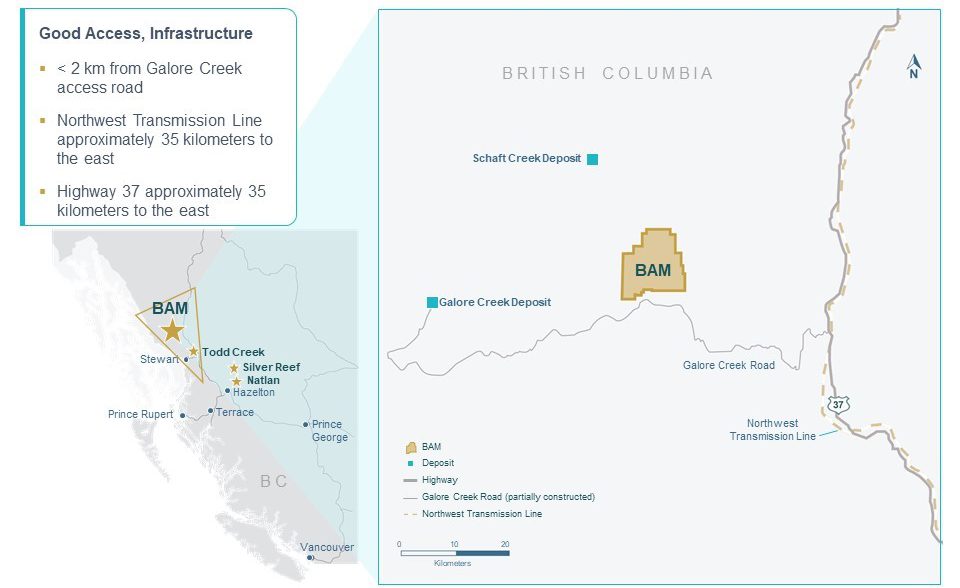 “Essentially what we have on our hands is the biggest discovery in the Golden Triangle this year. I think we are on to something big,” says Ovsenek, who suggests BAM has a similar backstory to the Gabbs property.

“This thing has been sitting here waiting for someone to take a systematic approach to looking for bulk tonnage gold and copper, and given the early indications we are really excited about this property,” says Ovsenek.

What’s more, BAM has excellent infrastructure for the Golden Triangle.Â  It’s not on top of a mountain, there’s no glacier to cross, a road is less than two kilometers from the property boundary and a transmission line is roughly 35 kilometers away.

P2 Gold is in an enviable position of year-round news flow, with exploration in the north during summer months and work on Gabbs during winter months. The company is well-financed with C$6 million in the treasury (June 30, 2021) and 59,854,395 shares issued and outstanding, 23,179,036 outstanding warrants priced between C$0.60 and C$0.85 and 4,559,166 share options with exercise prices between C$0.30 and C$0.72 predominantly owned by directors and management. Management owns 30 percent of the company, Waterton Precious Metals Fund owns 25 percent and retail investors the remaining 45 percent. At the time of writing, no other institutional funds have positions in P2 Gold.