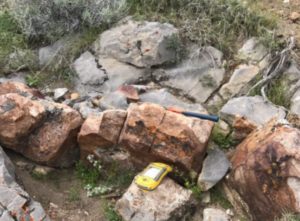 Pasinex Resources Ltd. (PSE-CSE, PNX-FSE) has intersected black shale hosted zinc sulphides beneath high-grade zinc oxides at a property in Nevada that was previously known as the Gunman Zinc project. Its name has been changed to the Spur Zinc project.

In an update released after the close of trading on Wednesday, Pasinex said it is poised to begin drilling at the Akkaya Zinc property in Turkey. In addition, the company said it has arranged to receive funds from certain shareholders and directors of the company in the form of promissory notes, which will provide the company with $400,000 to will help meet its working capital requirements and facilitate payments required to complete the drilling program on the Spur Zinc Project.

Pasinex was launched in 2012 by Steve Williams, an Australian metallurgist with a background in geometallurgy. He is now the company’s CEO. Since then, the company has distinguished itself by bringing its high grade Pinargozu zinc mine in Turkey into production without going through all the usual regulatory and financing hoops.

However, the company recently turned its attention to Nevada by entering into an option agreement with Cypress Development Corp. (CYP-TSXV) and Caliber Minerals Inc. (formerly Silcom Systems Inc.) to earn up to an 80% interest in the Gunman zinc project, now known as Spur. The project is located in White Pine County.

Essentially, Pasinex acquired the option by honouring the terms of Silcom’s original option agreement to acquire an 80% interest from Cypress in the project.

On August 8, 2018, the company said an initial program of four inclined drill holes has been completed at the Spur project, covering 698 metres. Assay results are pending.

The Spur Zinc Project is located about a 90 minute drive south of Elko in eastern Nevada.

“We are delighted with the new discovery of zinc sulphides at our Spur Zinc Project, even at this initial stage of our drilling it sparks a radical rethink not only of the potential scale of the mineralizing system we are targeting but also how we effectively explore it,” Williams said.

He said the shale-hosted mineralization was unexpected and presents new and exciting potential for a shale hosted massive sulphide deposit. In the goldfields of Nevada, this style of zinc mineralization would have been easy to miss by previous explorers without experience in this kind of mineralizing system.

Assays from the 2018 drilling program are expected during the third week in August, with publication reporting by the end of the month.

Meanwhile, Paxsinex said it is ready to drill the first ever drill targets at the Akkaya zinc Property in Turkey by early September.

The joint venture is focusing in an area that is underlain by a northeast-southwest trending belt of carbonate-dominated rocks (the Horzum Zinc Trend) that are known to host small high grade oxide zinc deposits, many of which had been mined already.

That included the former Horzum Mine, which was operated by Akmetal and produced approximately one million tonnes of zinc oxide ore (grading between 20% and 30% zinc) from 1974 to 2000, including 420,000 tons of sulphide ore.

Pasinex, through its joint venture interest in Horzum AS, will drill three holes at Akkaya from each of three drill pads for a total of 2,000 metres.  Compelling drill targets have been generated over the last few months through a combination of detailed re-mapping in the rugged hill country between 500 metres and one kilometre north of the company’s Pinargozu zinc mine.