“Hole PC22-08A was drilled in the South-East Lobe as a 200-meter step-out from the historic resource and nearly 50m down-dip of hole PC22-07 which was announced in September. This hole further confirms the existence of additional mineralization outside of the historical resource and within the South-East Lobe.” Stated Christina McCarthy, President, CEO.  “i-80 Gold recently announced a scoping study which included a plan for converting the current process plant from a mill/leach facility into a base metal flotation plant which would process lead-silver and zinc concentrates.  Those base-metal facilities, if completed, could be an optimal scenario for any future processing of mineralized material from the FAD deposit given that i-80’s property is directly next door to us.” Ms. McCarthy added.

“The Eureka District is one of the most under-explored Carbonate Hosted base metal districts within the western part of the United States with previous operators largely focusing on Carlin-style mineralization. Recent results from hole PC22-08A continue to demonstrate the high-grade nature of the silver-lead-zinc mineralization.  The combined 16.6% lead-zinc grade, and the 376 g/t silver grades in hole PC22-08A are among the highest combined metal grades Paycore has drilled to date. Additionally, the presence of gold mineralization in the system is adding considerable potential for a higher overall average grade of the deposit. FAD remains open in several directions and is poorly untested down-dip.” stated Gary Edmondo, Exploration Manager.

Drilling in the South-East Lobe has already proven the lateral extension of the mineralization at FAD to be over 400 metres in length, and up to 400 metres wide. Hole PC22-08A is a 200-metre step-out from the historical resource and drilled into the new South-East Lobe. This hole intersected the South-East Lobe 47 meters North-Northwest and down-dip of hole GH21-02 and 65 meters North and down-dip of hole PC22-07 (figure 1 below).  The base metal grades in hole 08A include a combined lead-zinc grade of 16.6% and 376 g/t silver which are among the highest-grade holes drilled to-date. Additionally, the gold mineralization in the carbonate replacement deposit “CRD” is believed to be associated with the large Carlin-style deposit located adjacent to the FAD deposit and could potentially contribute to the higher overall average grade.  Hole 08A intercepted 7.1 g/t Au over 14.8 metres including 15.9 g/t Au over 5.8 meters. This hole demonstrates higher grade mineralization exists down-dip from holes GH21-02 and PC22-07.

Additional drilling within the South-East lobe is planned to further test the down-dip extension along with additional step-out drilling outside of the historic resource.

Assay results announced today in hole PC22-03 are from the near-surface oxide target intercepting oxide mineralization of 6 g/t AuEq over 4.6 metres and 2.94 g/t AuEq over 6.1 metres, within 125 metres from surface. Hole PC22-03 was drilled proximal to the historic mine workings which were mined over 100 years ago.  Historic workings extend along strike of the Ruby Hill Fault for 1.5 km and cover a lateral extent of 0.5 kilometers. This large target will receive further testing in upcoming exploration drill programs.

Table 2: Drill Highlights from the near-surface Oxide Target on the FAD Project.  Hole PC22-03 announced today is highlighted below 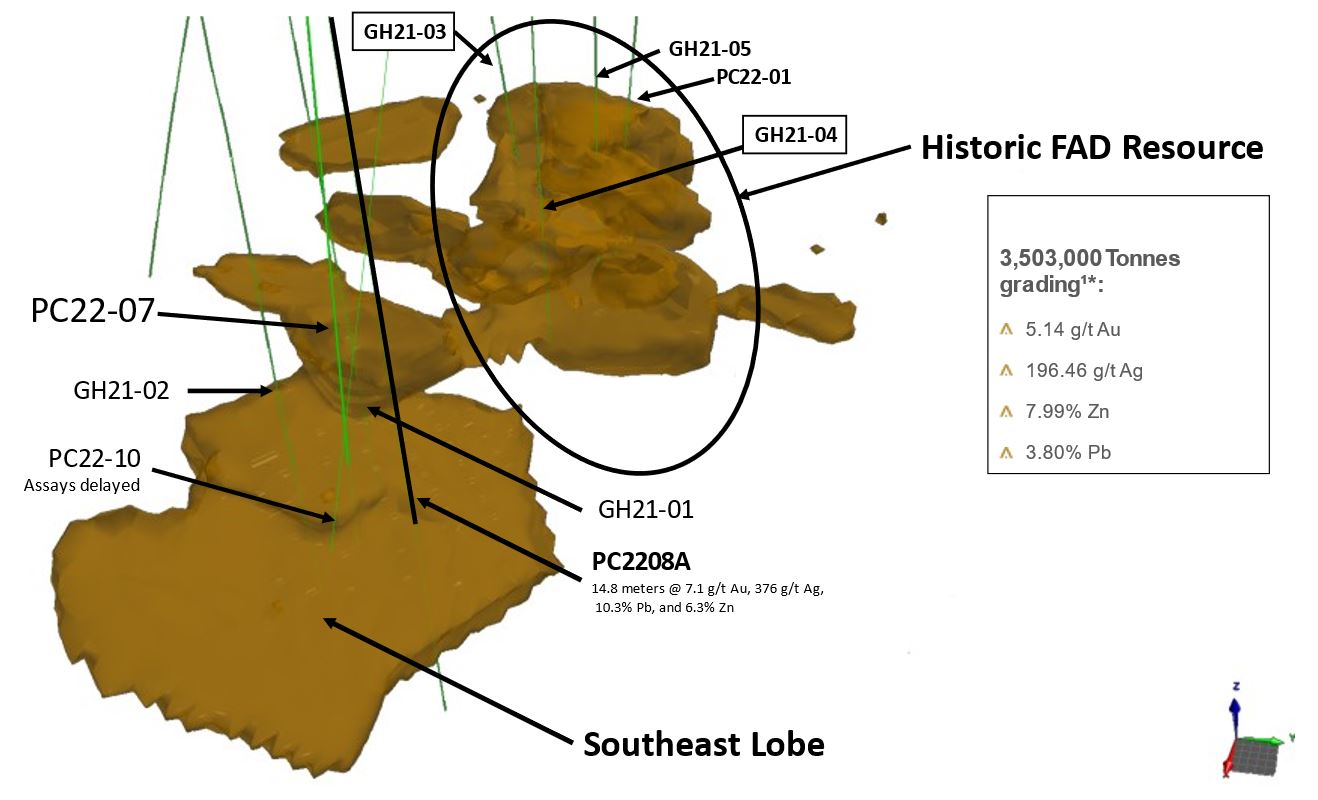 The FAD main zone sulfide mineralization associated with the CRD system has a has a known footprint of approximately 1.5 x 1.5 km and is open in multiple directions. Little to no exploration has been completed outside of the core mineralized area.  The drilling from the 1950’s and 60’s intercepted multiple zones of high-grade mineralization in the favorable host rock.  Paycore will test these horizons which are typical for hosting mineralization in the upcoming drill program.

With additional drilling there is a potential to define a near-surface oxide resource proximal to historic mine workings.  Paycore is currently modeling the old workings to define an exploration program on the oxide target.

A new corridor of carbonate hosted silver-lead-zinc mineralization was recently discovered at i-80 Gold’s Hill Top discovery. The discovery was made on the north-south trending Jackson Fault system which is largely untested and under-explored due to extensive alluvial and volcanic cover. The targeted Jackson-Holly fault system of North striking faults with NW cross faulting extends approximately 8-10 kilometres and hosts numerous CRD systems, including mines at Mineral Point on the North end, extending South to the Diamond and Hamburg mines in New York and Windfall Canyons. The silver-lead-zinc mineralization discovered by i80 Gold is hosted in the Goodwin Limestone, which is largely untested.

This opens up a new opportunity for potential discoveries on Paycore ground. The Goodwin Limestone lies in the hanging wall of the Jackson Fault system. There is nearly 3 kilometres of the Jackson-Fault and widespread exposure of Goodwin Limestone on Paycore’s property that is poorly tested.  Paycore is currently planning an exploration program which will include testing this new discovery corridor.

Paycore has completed over 10,264 metres of drilling to-date.  Assay results are pending for hole PC22-10 and will be announced upon receipt and review of results.

Paycore is a corporation incorporated under the Business Corporations Act (Ontario) and, through its subsidiaries, holds a 100% interest in the FAD Property that is located in the heart of the Eureka-Battle Mountain trend in Nevada, USA. The FAD Property is host to the high-grade poly-metallic FAD deposit that was partially delineated with surface and underground drilling in the 1940s and 1950s.  The FAD Property is located less than 3 miles from Eureka, Nevada and has established infrastructure, including a shaft, roads and old buildings. FAD was previously owned by Barrick Gold. Barrick acquired the FAD Property when the Company acquired Homestake Mining in 2001.

Overseen by an experienced board and management team that includes Jim Gowans (Non-executive Chairman), Christina McCarthy (President & C.E.O), Steve Filipovic (C.F.O. and Corporate Secretary) and John Begeman (Director), the Company is focused on advancing the delineation of mineral deposits on the FAD Project (which is situated immediately to the south of, and along strike from, I-80 Gold Corp’s Ruby Hill Mine).

All samples were submitted to ALS Minerals (ALS) of Sparks, NV, which is an ISO 9001 and 17025 certified and accredited laboratory, which is independent of the Company. Samples submitted through ALS are run through standard prep methods and analysed using Au-AA23 (Au; 30g fire assay) and ME-MS61 (48 element suite; 0.25g 4-acid/ICP-AES and ICP-MS). ALS also undertakes their own internal coarse and pulp duplicate analysis to ensure proper sample preparation and equipment calibration. Paycore’s QA/QC program includes regular insertion of CRM standards, duplicates, and blanks into the sample stream with a stringent review of all results, and third-party assay checks of mineralized intercepts.

The scientific and technical data contained in this news release pertaining to the FAD Property was reviewed and approved by Gary Edmondo, CPG, who is a “qualified person” within the meaning of NI 43-101 – Standards of Disclosure for Mineral Projects. Gary is a certified professional geologist through the AIPG (#11089)

The forward-looking statements contained in this news release are made as of the date of this news release, and are expressly qualified by the foregoing cautionary statement. Except as expressly required by securities law, the Company does not undertake any obligation to update publicly or to revise any of the included forward-looking statements, whether as a result of new information, future events or otherwise.