I don’t want to get into an argument debating capitalism vs. socialism or capitalism vs. the anti-industrial movement. I just want to point out how much Canada depends on its natural resources to provide its citizens with one of the highest standards of living in the world.

And along with a high standard of living are the many social services the federal and provincial governments provide such as a national medical system, widespread useful infrastructure, education, welfare for the destitute, and a host of other services.

Obviously, governments don’t have their own money – they collect it in the form of taxes and royalties from businesses as well as income and payroll taxes from employees. So where does all this money originate? As you can see from the accompanying chart, it is mining and the oil & gas sectors that are making a huge contribution. Let’s dive deeper into the numbers.

Valued at $105 billion in 2018, mineral exports accounted for 19% of Canada’s total domestic exports. According to the Natural Resource Governance Institute, in 2018, extractive sector companies reported payments of more than $10.4 billion to Canadian governments.

During 2019, mining accounted for one in 30 jobs – that’s well over 600,000 jobs. According to the Mining Association of Canada, proportionally, the mining industry is the largest private employer of Indigenous peoples and provided over 16,000 jobs in 2018. 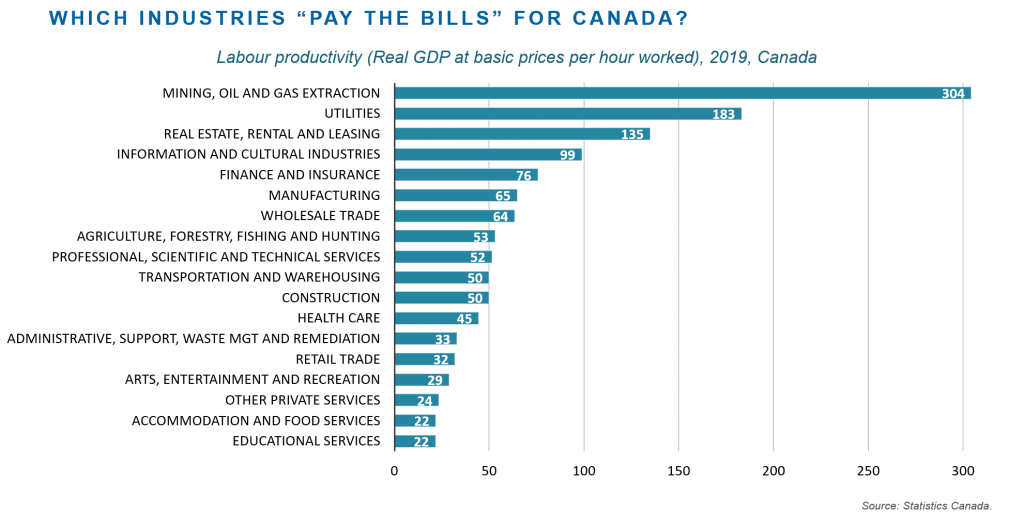 It’s worth remembering that selling mineral products to other countries generates original money for Canada as opposed to, say, casinos or a restaurants that provide important sources of revenue but just pass around already existing money.

We are lucky that Canadian stock exchanges welcome exploration and mining companies and have done so for decades. This has enabled talented entrepreneurs to create junior exploration companies and, if they are lucky and smart, discover significant orebodies that create wealth, employ workers, and pay taxes and royalties.

The above comments also hold true for Canada’s oil & gas sector. While the coronavirus has disrupted demand with people not driving as much, when we get through this, the petroleum sector will regain its important status in the Canadian economy.

In addition, though car buyers have sat on the sidelines for the last couple of months they will eventually return to their favourite auto dealerships when things get back to normal.

Sales of electric cars will gather momentum, particularly with the imminent introduction of electric pickup trucks and SUVs – both significant segments of the auto industry. In 2018, 2.2% of new motor vehicles registered in Canada were zero-emission vehicles (ZEV) – either plug-in hybrid electric or full battery-electric vehicles – a tiny number but it’s growing. From 2017 to 2018, the number of new ZEVs registered increased 115%.

However, the vast majority of cars, trucks, boats, trains and aircraft will continue to reply on fossil fuels. In addition, besides Canada, the use of natural gas is increasing in many other countries as they wean themselves off coal for electricity and heating.

According to the Canadian Association of Petroleum Producers, the Canadian oil and natural gas sector provided $108 billion to Canada’s gross domestic product in 2018, supported almost 530,000 jobs across the country in 2017 and provided $8 billion in average annual revenue to governments for the period 2016 to 2018.

Basically, it’s just plain silly for uninformed politicians to say “oil is dead” when it is obvious petroleum will be needed for the foreseeable future – not only because it is useful but will also be welcomed for its substantial contribution to our standard of living.

With regards to mining, more than ever, we will be needing critical metals and minerals for the technologies of the future such as lithium, manganese, nickel, copper, cobalt and graphite for electric vehicles. And, like petroleum, mining pays the bills.