Like gold and silver, platinum is used for jewelry and by industry. There are six Platinum Group Metals that, although rare, are often found together in a mineral deposit. They include platinum, palladium, rhodium, iridium, ruthenium and osmium – each with their own characteristics that make them uniquely suitable for various applications. Approximately 50% of global palladium production comes from platinum mines; however, there are two primary palladium mines: Stillwater and Lac des Iles.

Platinum is used in autocatalysts, both gasoline and diesel, to reduce emissions as well as in computer hard drives, glass manufacturing and petroleum refining, to name a few. Due to its hardness and beauty, platinum is also used in jewelry.

Rhodium is also used in autocatalysts as well in applications that require very hard plating. Other applications include electrical contacts, jewelry and as an alloying agent with platinum and palladium. These alloys are used to make such things as furnace coils, electrodes for aircraft spark plugs and laboratory crucibles. The remaining three PGMs have very small markets.

A February 2020, Johnson Matthey report stated that the “platinum market swung into deficit in 2019, as a resurgence in ETF buying lifted physical investment demand to a record 1.3 million ounces. This outweighed a modest contraction in global industrial and automotive demand and a double-digit drop in the Chinese platinum jewelry market.” 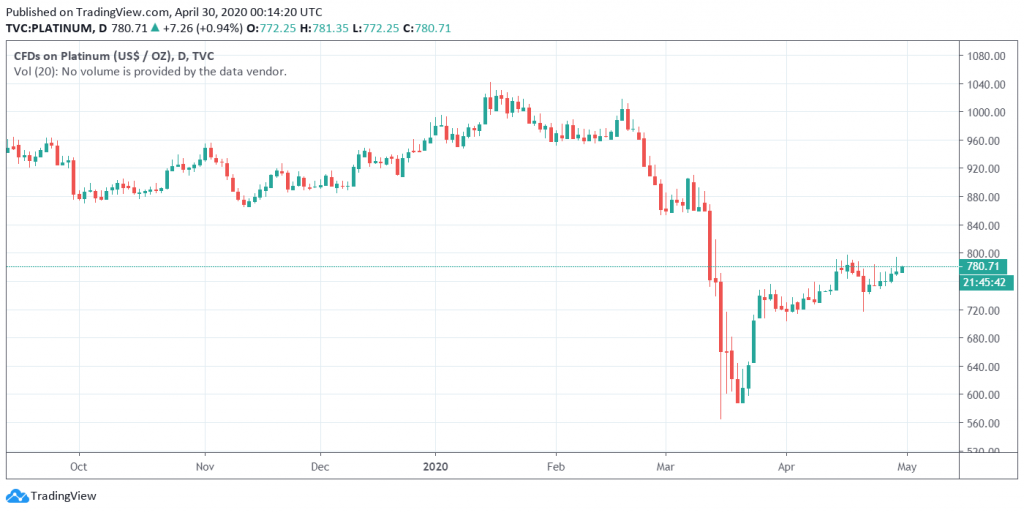 Looking at the supply-demand situation, Johnson Matthey (JM) said that “unless investor appetites are sustained into 2020, the platinum market could move back into a surplus.”

Their report stated that “demand for platinum will be supported this year by rising PGM loadings on heavy duty trucks in China and India, where stricter emission legislation is due to be implemented in 2020. However, we expect this to be off-set by further erosion of platinum jewelry demand and a drop in purchasing in the glass sector.”

The JM report went on to state that “interest among automakers is rising, but 2020 is still too early to see significant substitution of platinum into gasoline emissions catalysts.”

It was obvious that the JM report was written before the Coronavirus outbreak in China so it remains to be seen how this will affect Chinese platinum and palladium demand.

During 2019, all-time highs were seen in the palladium price as the market moved over a million ounces into deficit. The JM report noted that “intensifying use of palladium in gasoline cars in Europe and China pushed auto demand to a record level, despite falls in vehicle output. Industrial demand fell slightly, mainly due to slowing world economic growth. The rate of ETF redemptions fell sharply despite the rise in price, and during the second half of 1019 there were signs of a return to positive investment buying.”

According to the JM report, the palladium deficit is likely to deepen in 2020, as an increasing number of Chinese and European vehicles meetâ€¦ [higher emissions standards]. Efforts to reduce palladium consumption in the automotive industry are unlikely to prevent demand rising in 2020. Remaining ETF holdings of palladium are not enough to offset the shortfall in supply.”

There are opposing forces at work that affect the prices of PGMs. The JM report commented that “With a muted outlook for supplies and potential upside in autocatalyst demand, platinum could see further interest from investors in 2020, especially if economic uncertainty continues to support the gold price, and platinum’s discount to gold remains at record levels.”

Meanwhile, considering the fact that, in addition to electric cars, there will soon be electric SUVs and pickup trucks that don’t need catalytic converters, lessening PGM demand that will be counter-balanced by increasing sales of gasoline and diesel vehicles which account for about 80% of palladium demand.Depending on how quickly auto makers build electric vehicles and phase out internal combustion engines coupled with how quickly the worldwide driving public buys electric vehicles, we will just have to wait and see how it plays out.

Moreover, as JM notes, “the autocatalyst recovery industry [in China] is still relatively underdeveloped, and the precise trajectory of future growth is still uncertain.” Basically, buoyed by strong demand, the PGM industry will remain healthy but just how healthy is unknown.

Below are profiles of various PGM explorers and miners.

The objective of the drilling is to expand the NI 43-101 Inferred Resource of 523,000 ounces of palladium equivalent. The resource is defined over 1.8 km along strike and drilled down dip (-45áµ’) to 125 metres. The continuing program is testing the full 3-km length to a depth of 240 metres.

Eastern Platinum Ltd. [ELR-TSX, LSE AIM; ELRFF-OTC; EPS-Jo’burg] has a number of PGM and chromium projects in South Africa. At the Crocodile River Mine (CRM), operations of the Retreatment Project began in December 2018 and reached over 89% capacity in September 2019. The project expanded to PGM recov-ery testing in Q2 2019 and assessments of PGM recoverability continue in late 2019. PGM concentrate is now being produced.

Eastplats continues to actively monitor the PGM markets and other developments in the mining and minerals sector to assess economics related to the addition of a PGM recovery circuit as part of the Retreatment Project or resuming under-ground mining at CRM, currently on care and maintenance.

Clean Air Metals Inc., which is in the process of changing its name from Regency Gold Corp. [RAU.H-NEX], has signed an option agreement with Benton Resources Inc. [BEX-TSXV] to earn a 100% interest in the Escape Lake property north of Thunder Bay, Ontario, subject to a 1.0% NSR to Rio Tinto. A second option agreement was signed to acquire the Thunder Bay North Project from Panoramic Resources via Benton.

At Thunder Bay North, the Current Lake deposit has a historical Indicated Resource of 741,000 oz PtEq based on 2012 metals prices. The Escape Lake Project has a high-grade zone drilled by Rio Tinto that includes 33.4 metres of 7.28 g/t Pt+Pd+gold and 2.26% copper+nickel.

The company plans to drill both proj-ects and prepare an updated mineral resource estimate.

Generation Mining Ltd. [GENM-CSE; GENMF-OTC] is moving ahead with the Marathon palladium project 10 km north of Marathon, northwest Ontario. Generation has a 51% interest with an option to earn up to 80%. The property hosts three known PGM-copper deposits, which con-tain a resource of 8,668,000 PdEq oz in the Measured and Indicated categories, and an additional 915,000 PdEq oz in the Inferred category. A new seismic target has been dis-covered beneath the Sally deposit.

An independent Preliminary Economic Assessment was recently prepared that provides a compelling base case assessment for an open pit mining operation. At two-year trailing metal prices, it estimated that for an upfront capital cost of $431 million, it would have an after-tax IRR of 30%, a NPV (5% discount) of $871 million, and an after-tax payback of 2.5 years.

Historical drilling at the recently acquired Parisien Lake Deformation Zone intersected palladium-dominant miner-alization in widely-spaced holes in over 600 metres of strike length. Recent surface sampling by Grid in this confirmed surface values in grab samples ranging up to 3.39 g/t palladium, 0.39 g/t platinum and 0.04 g/t gold hosted in a leucogabbro with no visible sulphides.

While calculated as a nickel equivalent, the deposit is polymetallic. Highlights from 2019 exploration work at the Camp target area include:

Rhodium assays are pending. Michael Rowley, President and CEO, said, “We are very pleased to have confirmed and signifi-cantly expanded the known extent of bulk tonnage Platreef-style PGE-Ni-Cu-Co min-eralization at the Camp target area, more than doubling the tested depth from sur-face to 400 metres, where drilling ended in mineralization.”

In December 2019, North American Palladium Ltd. announced the success-ful completion of a plan of arrangement with Impala Platinum Holdings Limited. Under the arrangement, Implats acquired 100% of the outstanding common shares of NAP for a total cash consideration of approximately C$1.0 billion. NAP became a wholly-owned subsidiary of Implats.

Impala now has a 100% interest in the Lac des Iles palladium-platinum-gold-copper-nickel mine 85 km northwest of Thunder Bay, Ontario. Revenue for the first nine months of 2019 was $413.8 mil-lion based on 172,507 payable ounces of palladium sold.

Ivanhoe Mines Ltd. [IVN-TSX; IVPAF-OTCQX] indirectly owns 64% of the Platreef Project through its subsid-iary, Ivanplats, and is directing all mine development work. The South African beneficiaries of the approved broad-based, black economic empowerment structure have a 26% stake in the Platreef Project. The remaining 10% is owned by a Japanese consortium of ITOCHU Corp. and Japan Oil, Gas and Metals National Corporation; and Japan Gas Corp.

Platreef’s flat-lying mineralized zones are up to 90 metres thick, at a 1 g/t 3PE+Au cut-off, with PGM grades that are as high, or higher, than many of the narrow-veined PGM mines on South Africa’s eastern and western limbs. Platreef also has large quan-tities of nickel, copper and gold, which are expected to establish Platreef as the lowest-cost PGM producer in Africa.

Based on an independent 2017 Definitive Feasibility Study (DFS), Platreef is projected to have a cash cost of US $351/ oz of 3PE+Au, net of nickel and copper by-products, and including sustaining capital costs. The DFS estimated that Platreef’s initial, average annual production rate will be approximately 219,000 oz palladium, 214,000 oz platinum, 30,000 oz gold and 14,000 oz rhodium (combined 477,000 oz 3PE+Au), plus 21 million lbs nickel and 13 million lbs copper.

The resources used as the basis of the DFS were those amenable to underground selective mining.

Max recently signed a letter of intent to acquire a 100% interest in the EBAY palladium project 30 km southeast of Mattagami, QuÃ©bec where sampling has returned 3.04 g/t palladium, plus 1.39 g/t platinum, plus 0.12 g/t rhodium.

An updated NI 43-101 report was com-pleted in January 2019, with a resource of 2.9 million oz of Palladium Equivalent (Measured and Indicated) and 1.1 million oz in Inferred. A pre-feasibility study is in the works. Drilling will begin shortly.

The company has also been explor-ing the 100%-owned road-accessible Genesis PGE-Ni-Cu Project in Alaska where last summer’s exploration dou-bled the strike length of prospective mineralization. More work is planned, including prospecting, geologic map-ping and geochemical sampling for all of the newly identified PGE-Cu-Ni targets. Geophysics is also being considered to pri-oritize drill targets.

Palladium One Mining Inc. [PDM-TSXV; NKORF-OTC; 7N1-FSE] reported that the Finnish mining authority has approved all eight exploration permit renewals and one new exploration permit application for its 100%-owned palladium-dominant Lantinen Koillismaa (LK) PGE-nickel-copper project in north-central Finland where drilling is planned. Work is temporarily suspended due to the COVID-19 pandemic.

Palladium One is also exploring its 100%-owned Tyko Project near Marathon, Ontario with prospecting assay results of up to 0.74% nickel, 4.09% copper and 2.51 g/t PGMs.

Platinum Group Metals Ltd. [PTM-TSX; PLG-NYSE American] is advancing the 50.02%-owned palladium-dominant Waterberg Project located on the North Limb of the Bushveld Complex in South Africa. An independent Definitive Feasibility Study was published on September 24, 2019 which envisioned a fully mechanized, shallow, decline-access palladium-platinum-gold-rhodium (4E) mine at an annual production rate of 420,000 4E oz and a 45-year mine life.

The company and Anglo American Platinum have launched a new venture, Lion Battery Technologies Inc., to accel-erate the development of next-generation battery technology using platinum and palladium. Lion has entered into an agree-ment with Florida International University to further advance a research program that uses platinum and palladium to unlock the potential of Lithium Air and Lithium Sulfur battery chemistries to increase their discharge capacities and cyclability.