Argentina Lithium & Energy Corp. (TSX-V: LIT, FSE: OAY3, OTC: PNXLF), (“Argentina Lithium” or the “Company”) reports positive lithium brine values from the second diamond drill hole at its Rincon West Project in Salta Province, Argentina. The Rincon West project covers 2,951.5 hectares of the salar basin, located west of the adjacent Rincon Project owned by Rio Tinto. The property is currently permitted for up to 9 exploration drill holes. The fourth exploration hole is currently in final steps to completion. The brine analytical results from the second hole have been received and are reported below.

“The results of the second exploration hole demonstrate remarkably consistent lithium grades, when compared to the first. RW-DDH-002 results reveal an impressive concentrated brine aquifer, tested with packer sampling over ~77% of the interval between 182 and 305 metre depths, with lithium values ranging from 337 to 367 mg/litre. Additional concentrated brines with lower lithium contents were also recovered from above this 118 metre interval. Drilling thus far validates that the adjacent lithium salar extends under our properties, with consistently high lithium grades. The drill program will continue as planned with the aim of delineating an initial lithium mineral resource.” stated Miles Rideout, V.P. of Exploration.

The results of the brine analyses and the respective intervals from which brine was recovered are shown in Table 1. Drill collar information is presented in Table 2.

Map 1 presents a map of the Rincon West property showing the positions of the four initial exploration holes, including RW-DDH-002 and the previously announced RW-DDH-001 (see July 13, 2022 News Release). Exploration drilling is ongoing. The map presents the completed drill locations overlaid on the conductive zones delineated with geophysics (see May 2, 2022 News Release). 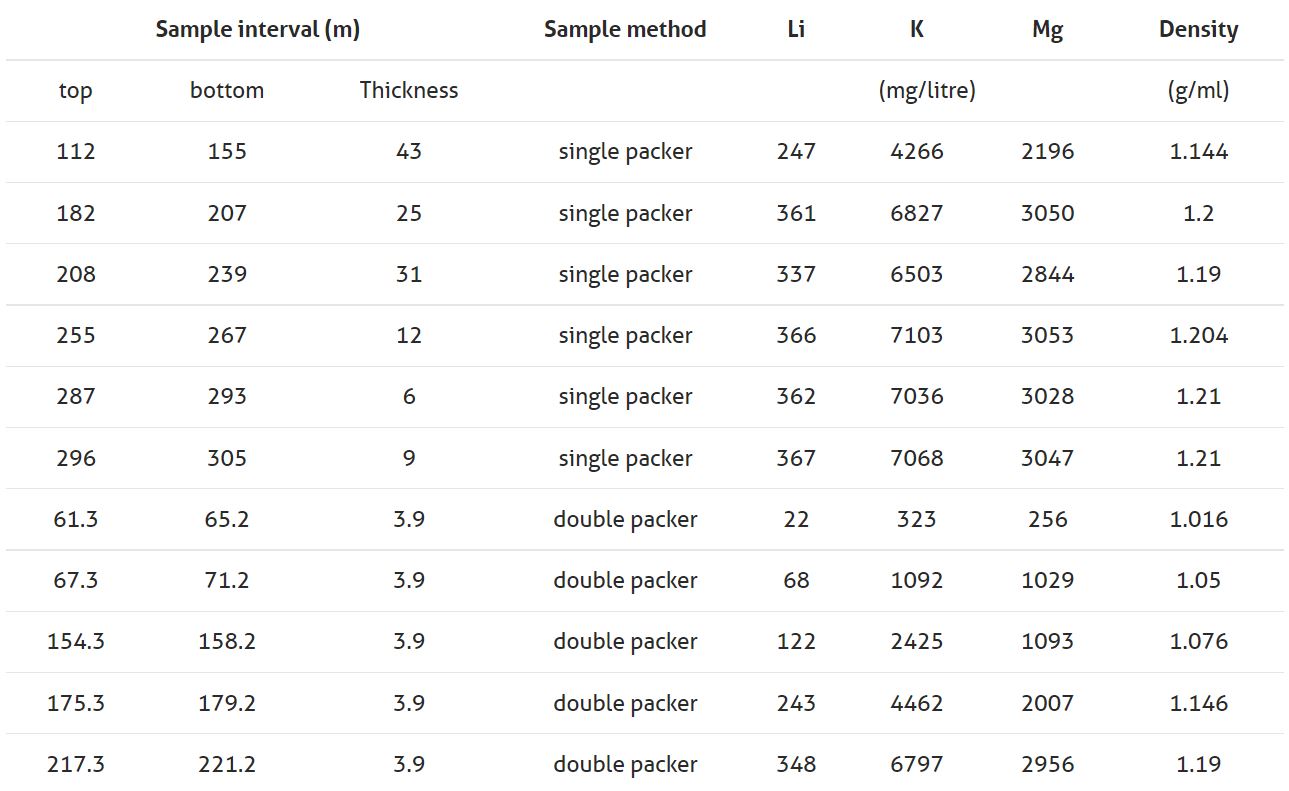 *Drill hole RW-DDH-002 was drilled vertically to a depth of 323m below surface; the salar strata are believed to be flat lying resulting in reported intervals approximating true thickness

Hole RW-DDH-002 was executed with diamond drilling (HQ-size), permitting the extraction of core samples of the salar basin formations and recovery of brine samples, where possible. Drilling was conducted between July 7 and July 22, stopping at 323 metres depth in igneous basement rock units. Final sampling and lining the hole with 2” diameter PVC filters and casing were completed by July 25, 2022. Drilling was carried out by Salta-based AGV Falcon Drilling SRL, under the supervision of Argentina Lithium’s geologists.

Brine sampling was conducted using a single packer sampling unit during drilling. Upon completion of the drilling, selected intervals of the hole were re-sampled with a double packer system, permitting isolation of certain intervals. The packer sampling method allows the collection of brine samples at specific depths while sealing the hole at the top and bottom of the interval.

As anticipated by the exploration team, freshwater layers were found to overly the much denser concentrated brine aquifer. Recovered brine samples indicate relatively fresh water in the interval 61.3 to 65.2 metres depth, transitioning to brackish in the interval 67.3 to 71.2 m depth. Brine concentration increased below this level, as reported in Table 1. A number of additional packer sampling attempts from intervals outside of those reported in Table 1 did not return a sufficient quantity of brine considered representative for analysis.

No casing was required during drilling. Poorly consolidated gravels were logged from the surface to 23 m depth, where sandy sediments began. Black and dark sands were logged to 66 m depth, at which point sulphates appear, likely indicating the presence of the salar formation. Sandy units with bands of sulphates and gravels were logged from 66 m to 90 m depth, entering a silt layer logged between 90 m and 92 m. Darks sands with abundant layers of clays and occasional gravels were logged from 92 m to 154.25 m depths. Dark sands with abundant interbedding of sulphates continued from 154.25 m to 199 m depth. Sands with intercalated gravels were logged between 199 m and 236 m, followed by gravels logged to 245 m depth. At 245 m, the drill entered aplite (fine-grained igneous rock), displaying varying degrees of fracturing. Sulphates were observed from 66 m depth through the sediment units and within some fractures in the aplite. Metamorphosed quartzite was encountered from 293m, the upper 10 m with significant fracturing. The hole was stopped in metamorphosed quartzite at 323 m depth. All core samples recovered in drilling are retained for logging and are available for subsequent laboratory evaluation of factors such as total and effective porosity, permeability and other measurable characteristics of the aquifer formation.

Samples of brine were submitted for analysis to Alex Stewart International Argentina S.A. (“Alex Stewart”), the local subsidiary of Alex Stewart International, an ISO 9001:2008 certified laboratory, with ISO 17025:2005 certification for the analysis of lithium, potassium and other elements. Alex Stewart employed Inductively Coupled Plasma Optical Emission Spectrometry (“ICP-OES”) as the analytical technique for the primary constituents of interest, including boron, calcium, potassium, lithium, and magnesium. Measurements in the field included pH, electrical conductivity, temperature and density. The quality of sample analytical results was controlled and assessed with a protocol of blank, duplicate and reference standard samples included within the sample sequence. In addition, 11 samples including 1 blank and two standards were submitted for re-analysis at Alex Stewart. The blank (2), duplicate (1) and re-submitted samples (8) analysed at Alex Stewart all reported in the acceptable range. A low-grade and medium-grade reference standard were included in the initial and second submission to Alex Stewart. The low-grade reference standard analyses were within the acceptable range of 2 standard deviations (SD) and with less than 2% relative percent difference (RPD); the medium-grade standard returned results less than 3 SD, but with a low RPD (1.75% and -3.25%).

As well, two duplicate check samples were submitted to SGS Argentina and also analyzed by ICP-OES. Initial results were significantly higher than expected and the samples were re-run in addition to a low-grade standard sample. The lithium grades from the re-analysis of the check samples correlated well with the grades reported by Alex Stewart; the standard sample, however, returned a grade 15% below the acceptable lithium value for the standard. Further investigation to determine the cause of this standard failure is ongoing.

David Terry, Ph.D., P.Geo. is the Company’s Qualified Person as defined in National Instrument 43-101. Dr. Terry is responsible for oversight of the Company’s early-stage exploration at the Rincon West property. The disclosure in this news release has been reviewed and approved by Dr. Terry.

Argentina Lithium & Energy Corp is focused on acquiring high quality lithium projects in Argentina and advancing them toward production in order to meet the growing global demand from the battery sector. The management group has a long history of success in the resource sector of Argentina and has assembled a first-rate team of experts to acquire and advance the best lithium properties in the “Lithium Triangle”. The Company is a member of the Grosso Group, a resource management group that has pioneered exploration in Argentina since 1993.

Forward-looking statements are subject to a number of risks and uncertainties that may cause the actual results of the Company to differ materially from those discussed in the forward-looking statements and, even if such actual results are realized or substantially realized, there can be no assurance that they will have the expected consequences to, or effects on, the Company. Factors that could cause actual results or events to differ materially from current expectations include, among other things: the impact of COVID-19; risks and uncertainties related to the ability to obtain, amend, or maintain licenses, permits, or surface rights; risks associated with technical difficulties in connection with mining activities; and the possibility that future exploration, development or mining results will not be consistent with the Company’s expectations. Actual results may differ materially from those currently anticipated in such statements. Readers are encouraged to refer to the Company’s public disclosure documents for a more detailed discussion of factors that may impact expected future results. The Company undertakes no obligation to publicly update or revise any forward-looking statements, unless required pursuant to applicable laws. We advise U.S. investors that the SEC’s mining guidelines strictly prohibit information of this type in documents filed with the SEC. U.S. investors are cautioned that mineral deposits on adjacent properties are not indicative of mineral deposits on our properties.